Anger against North River Farms may lead to recall, referendum 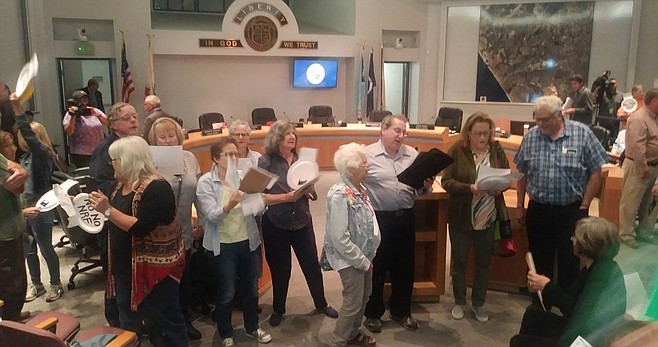 City councilman Christopher Rodriguez admits his efforts to pursue farming have not gone as well.

It’s not the fact that he may have failed as a farmer that is causing locals to band together and launch a recall effort to remove him from office. They say it's because he lied about being a farmer to get elected. (He made it clear to voters that he was an ex-Marine, a Republican, and a Hispanic.)

“In September 2018 he said on [Oceanside public access channel] KOCT ‘I’m a farmer,’” Oceanside resident Jodi Williams said at a meeting of some 50 local residents. They gathered November 17 at a mobile home park clubhouse to discuss what they should do about Rodriguez and the North River Farms housing development he voted to approve. His approval gave the green light to plow under 215 acres of agricultural land to support 585 homes. That North River Farms approval four days earlier appeared to have triggered the Sunday afternoon meeting.

Everyone present seemed committed to upend the North River Farms Project and to remove Rodriguez from the Oceanside city council.

“He told the city attorney he has not maintained any farming in 2018 or 2019,” Williams told the group. “[Rodriguez] told [city attorney John] Mullen he made no money from farming during those two years.”

Williams disclosed that her husband will be the one serving Rodriguez at the November 20 Oceanside city council meeting with an intention to recall. Rodriguez was elected to his four-year city council term last November. He was the first one elected to serve as councilmember for the newly-created District 2, representing Oceanside’s northeast quadrant.

The assembled group applauded loudly when Williams announced Rodriguez will be served the notice by her husband, who like Rodriguez is a former US Marine. “We plan to serve him in front of God and everybody…by retired Master Gunnery Sergeant Mr. Mike…One Marine to another.”

Williams did not make the 200-word recall statement available at the meeting. But she said it will include other reasons why the voter’s decision to elect Rodriguez 12 months ago should be overturned. They include: committing to North River Farms months before it came to a public hearing; how the project will put his constituents in prospective danger from fire; and that he voted on issues that benefitted his business interests.

It is not clear if the recall will even make it to the ballot. Those motivated citizens must garner 4,456 valid signatures or 20 per cent of the 22,280 registered voters in District 2.

Fellow Oceanside councilmember Esther Sanchez, an announced candidate for the 2020 election for mayor, piled on with numerous reasons why she thought her colleague is a “bad actor.”

“He has threatened city employees,” said Sanchez. “He tried to get the city manager fired…He has been a real jerk to people. He accuses everybody of everything under the sun.” Sanchez says that when she first became a city councilmember, “I didn’t get one piece of [office] furniture. It’s all public record.” She said Rodriguez, on the other hand, got a large wide-screen TV when he came to city hall a year ago.

Some members of the group admitted the all-volunteer recall effort to get petition signatures will not have it easy. They will probably have to compete at Oceanside grocery stores and public events like The Turkey Trot with paid petitioners pushing an Oceanside cannabis measure. They pointed out that petitioners who get paid by the signature can get pushy.

Often openly contentious, Oceanside politics have triggered four recall elections of city councilmembers over the last 40 years. The first two, launched and organized by then newly-elected councilmember Melba Bishop in 1981, tossed out Bill Bell and Ray Burgess. Ten years later, Bishop herself beat back a recall effort but then failed to win reelection the following year. Jerry Kern turned back a recall in 2009 orchestrated by the Oceanside fire-fighters union.

If the group gathers enough signatures to get the Rodriguez recall on the ballot, Oceanside City Clerk Zeb Navarro says it is not clear when the special election would be held due to a number of variables. In the case of Melba Bishop’s recall, her election came 11 months after she was first served with the notice of recall.

Navarro says the failed recall of Jerry Kern ten years ago cost the city $500,000. He says this recall special election, should it happen, would be significantly less expensive since it would only cover District 2 which is one-fourth of the entire city.

Larry Kornit ran against Rodriguez in last November’s District 2 election. “Nobody can be surprised at what his [North River Farms] vote was. We knew how he would vote on this before he was elected. Everything that Christopher Rodriguez says is ‘my district, my district.’ He never refers to it as our district. I find that to be an incredible character defect.”

Rodriguez responded via email: “Farming is not as profitable as we all wish it could be. My passion for farming outweighs the profit which in some years results in zero revenue.” He denies he supported North River Farms before the public vote, and did not specifically answer the charges that his votes may have benefitted his personal interests. He says the new fire station to be built with the project will help those in the South Morro Hills area who now live outside the Oceanside fire department's five-minute response time.

The planned Rodriguez recall is not the only weapon in the citizen group’s quiver. They mentioned that a complaint to the FPPC (Fair Political Practice Commission) has been filed.

Yvonne Obrite said she filed a complaint with the FPPC because Rodriguez’s business interests are so close to the North River Farms development that he stands to benefit financially, and that he should have never voted for it in the first place. “If they decide he had a conflict of interest, his vote is nullified.,” says Obrite. She added that that would then make the North River Farms approval void since it passed on a 3-2 vote.

Dianne Nygaard, a longtime environmental activist, says the group must consider launching a referendum, which would specifically overturn the ordinance that allowed the North River Farm project to proceed. Clerk Navarro says that such a referendum would need approximately 9600 valid signatures to get on the ballot, which is 10 percent of the total number of Oceanside registered voters.

The last referendum in Oceanside was Measure E in 2010 which would have eliminated rent control for mobile homeowners. It was rejected by the voters.

Melba Bishop is an outdated name; at least as old as the 'historical' GMC NCTD buses before the innovation of electronic age.

Interesting article. But the photo gives the impression that Larry Kornit is somehow relevant. He isn't. And he certainly is not a leader in the movement against North River Farms. By running last fall Kornit took away votes from a candidate that would have defeated Rodriguez if a vanity campaign had not gotten in the way. Coming in sixth in a five-horse race does not a leader make. Neither does singing with a tonally challenged voice in an empty room. You can understand someone being bitter if they lose a close election. Mr. Kornit has no reason to be bitter. PS- There were a lot of really true comments about America's worst City Councilperson in the article, but calling out only Esther Sanchez as "piling on" seems a little biased when we stop to think of it.

Jack: The votes Larry received would not have helped your candidate. Corso? Johnson? No matter. They still would not have won as Rodriguez had a substantial lead. In order to beat him, you'd have to combine the votes from the 2nd, 3rd and 4th place candidates. So rather than scapegoating Larry, maybe try advocating for an IRV or Ranked Voting system.

Unless I'm imagining things, I read accounts of how the councilman Rodriguez was a leading cheerleader for this development. I other words, well before the vote was taken, he had his mind made up. That's how a politician can bring down plenty of bitterness on his or her own head.

The development can probably he held up by lawsuits, and kept stalled for a number of years. In that time, things can change, and one of them could be the referendum described. Getting almost ten thousand valid voter signatures is a big task but not impossible.

"Platinum recording artist Jason Mraz has done well…" Clever trick. Needs followup. The best technique is to insert the name of a famous person in every third paragraph, according to Napoleon Hill.

The councilman was in fact served with "intent to recall" papers this afternoon. I asked one of the recallerrs why they wanted to do it in the day instead of at the meeting in front of TV and other cameras. They said knowing his shaky history, they feared he would just not show up at the meeting.

Christopher Rodriguez again. City Council members (in any city) should be solid citizens. Sadly, too many voters couldn't care less who sits on the City Council, and they put very little effort into who they're voting for. This is the end result.

Christopher Rodriguez being recalled presents a chance to head off a nightmare. Ever read the alternate history stories saying "What if?" about the missed chances these types of forks in the road present? This is a chance to get things correct before a disaster.

It needs to be noted that Feller is the only candidate for next year's mayor election who supports the NRF project, and he has been plied with tens of thousands of dollars in donations from developer Integral over the years. Mayoral hopefuls Rocky Chavez, Ruben Major and Esther Sanchez are all against it. According to everyone I speak with (unscientific, of course), I would say the ratio of ANTI-NRF to PRO-NRF is probably three to one. In other words 75% of Oceanside voters are against. Interestingly, that's the same ratio as the four candidates for mayor. The people who spoke last night were overwhelmingly against it. I think the number was 38 to 8. This is what happens when they don't bus in employees and "clients" of the Solutions for Change homeless/drug group. The best line of the entire Novemeber 6 meeting was from Solutions for Change founder Chris Megison who said, (paraphrasing) that if you support this project, heroin use will decrease. And three council-members bought it! Rodriguez is getting recalled. We will see what happens with Feller and Weiss.

Weiss wasn't even elected to the office of mayor; he was appointed by three of four council members to finish Wood's term. Jerry Kern, who voted to appoint Weiss is now history. I think Weiss should just ride off into the sunset, holding his head as high as he can, and look back on his partial term as mayor as a culminating part of his career.

There was a time when I didn't have a high opinion of Rocky Chavez, but compared to the others on the council now, he's a prince. (I'd been hoping he could be the replacement for Issa in the House seat, but that was not to be.) If I lived in O'side, he would be my choice for mayor.