Credit card did not work at Encinitas Target, so....

"Nothing more than a mistake”

An unlucky parolee wheeled his shopping cart full of stolen goods into a parking lot where a deputy in his patrol car already had one suspect in the back seat, a prosecutor alleged in court November 12.

John Gabriel Gonzalez, 26, is on parole for a “strike prior.” He has already served time in state prison for six felony counts of robbery; those allegedly happened in early 2016 when Gonzalez was 22.

Eight months ago, in March 2019, Gonzalez finished a four-hour shopping marathon by leaving the Target store in Encinitas without paying for his items. A witness from the store at on El Camino Real south of Leucadia Boulevard said that Target employees tried to help Gonzalez in the self-checkout area, but his credit card or gift card were not accepted by the machines.

Gonzalez proceeded to leave the store anyway, with his cart full of electronics and condoms, according to witnesses at a pre-trial hearing. A scan of the recovered items, later, showed a total value of $971.43 for the merchandise in the cart.

Sheriff’s deputy Ken Coulburn said he was sitting in his patrol car in the parking lot filling out paperwork, and he already had one shoplifting suspect in the back seat. His attention was drawn to a woman who was arguing with someone near the front of the store, the officer described it as a “commotion,” and with an elevated voice the woman said, “There is a sheriff right there!” And she pointed to the deputy in his patrol car.

Deputy Coulburn said he recognized the woman as Maggie, the store loss-prevention officer with whom he had just been working on the shoplifting suspect already in his car.

And then the man walked away from the Target store and his cart; first he approached a car parked near the deputy, and then he went to the deputy’s car. That man, identified as Gonzalez, told the deputy that he tried to make a purchase but his card was declined; Gonzalez wondered if the Target employees really could ban him from ever entering that store again, as the woman had just said.

Officers first ran the name on Gonzalez’ ID card that he handed them, and they found no criminal record. But then officers tried a different last letter on the name, a z for the s, and then they found that Gonzalez was on parole.

In court, the defense attorney said, “This is nothing more than a mistake.” He pointed out that Gonzalez did try to pay for the items, and that he did not try to flee. None of the store’s merchandise was damaged, all items remained in the cart, and the store recovered their goods. And he said of the defendant, “He is in good standing with his parole officer.”

Judge Earl Maas advised attorneys to “try to resolve this one,” and ordered Gonzalez back to the San Diego North County Superior Courthouse on November 26, to set a date for felony grand theft trial.

So he's on parole for six felony counts of robbery. And he committed felony ground theft. Once a thief, always a thief. He can dance around it all he wants, but he had no intention of paying for anything in that shopping cart. Stevie Wonder could see through that.

Honorable judge Earl Maas seemed to think the case might get wobbly if it went before a jury, and he encouraged attorneys to come to some kind of resolution. 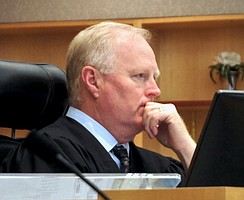 I understand why the judge wants the attorneys to come to some kind of resolution. A jury is always a crap shoot, and some jurors are naïve, and won't see through his "manipulation at the register." And what the heck is "ground theft?" Lets make that grand theft,,,

This is the kind of worthless dirt bag that should be sentenced to LWOP. These repeat offenders should not be allowed to walk the streets. They are too stupid to learn from the past.

What might be a surprise here was that anyone from the store's staff actually tried to stop him. Many retailers just tell their employees to let them go, and they watch the thieves walk out the door with a bagful or cart full of merchandise. But as to guilt, once he'd left the building, and knew that he hadn't paid for the contents of the cart, he had committed theft. With his record, any sentence he'll get will be much stiffer than it would normally be. So, will this become a misdemeanor plea bargain? Looks that way.

A lot of retailers do tell their employees not to get involved. Let loss prevention handle it, and call the police. Liability. If someone is injured, it's not worth getting sued for millions over a small dollar amount. They work shoplifting into profit and loss - the cost of doing business. And we all end up paying for it.

A fun and intriguing story. Did Gonzalez expect to walk out and not be stopped? Note that his goods had been scanned and probably did not set off the alarm at the door. As Visduh said, many are allowed to walk, but usually with some small amount of alcohol.

What about the credit card? It couldn't cover $1,000. Why didn't he know that? Or maybe he just didn't care. Or maybe it was stolen and he didn't know the balance. Was the person who tried to help him suspicious? Did the deputy, the lawyers or the court check the card?

And why did he approach the deputy when he possibly could have used that nearby car to get away? Bold or stupid? If we could hear the tone of voice of Gonzalez and Maggie we might have some clues. So many questions: 4 hours shopping? Condoms? Parole in good standing? Was he high?

"Gonzalez wondered if the Target employees really could ban him from ever entering that store again, as the woman had just said." -- This brings up another question; how could they ban him? Would they take his photo and pass it around to all the employees? I'm thinking that Target has a secret surveillance system, possibly capable of facial identification. That's how they knew he was shopping for 4 hours. And if it's a secret, is it because customers would be uncomfortable knowing about it? How do you feel about it?

How could someone like that even get a credit card?

Wasn't Target of Gemco in the earlier times?