Brainstory record at Diamond Mine Studio for Big Crown Records 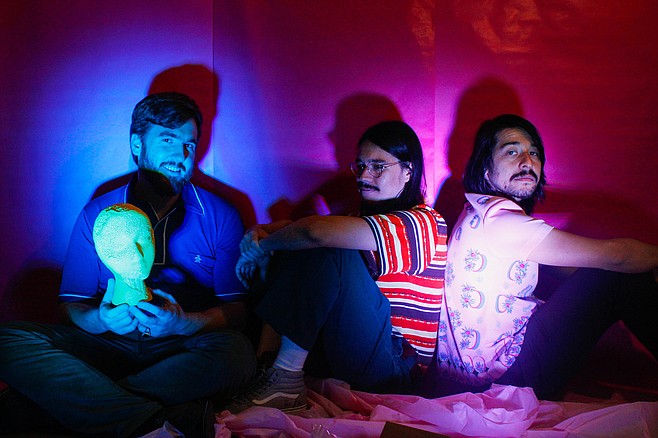 “One time it took me three hours to get to a gig in San Diego, and I was super late and we played for three people.” Brainstory drummer Eric Hagstrom hopes to improve that figure by several orders of magnitude, when the band plays November 17 at Thorn Brewing Company.

The going isn’t always smooth, in San Diego or elsewhere. But the trio, which also includes brothers Kevin and Tony Martin, isn’t rattled by much. They survived growing up in the San Bernadino Valley, which they describe as a “Twilight Zone.”

Tony elaborates: “The people are definitely a different breed, and being isolated geographically definitely gives a person the space to experiment out of boredom. It’s an empty canvas, basically.

“The mountains also exude a mysterious power, set a different kind of energy on the land, a buck energy. Out there you see all kind of random weird stuff going on in the streets.”

But Chicano Batman became Brainstory’s rallying point, and they count as their lucky day the one they signed to that band’s El Relleno Records. Two EPs followed; then the trio caught the attention of Big Crown Records (home of Lee Fields, among others), who sent them cross-country to Queens, New York.

“I guess the most shocking part of recording in Queens,” says Kevin about the album they eventually called Buck, “was the simple fact that we were recording our music at the Diamond Mine Studio… Looking at all the session tapes on the wall you see names like Charles Bradley, Chicano Batman, Black Thought, and numerous artists that cut their records there. It was amazing to be a part of that space.”

He finishes: “My favorite recording story was when we were playing our favorite dice game ‘Farkle’ at the studio, and [producer] Leon Michels’ daughter rolled up and beat all of us by a landslide. It was her first time playing.”