Granny flat subsidies may not work – look at Encinitas 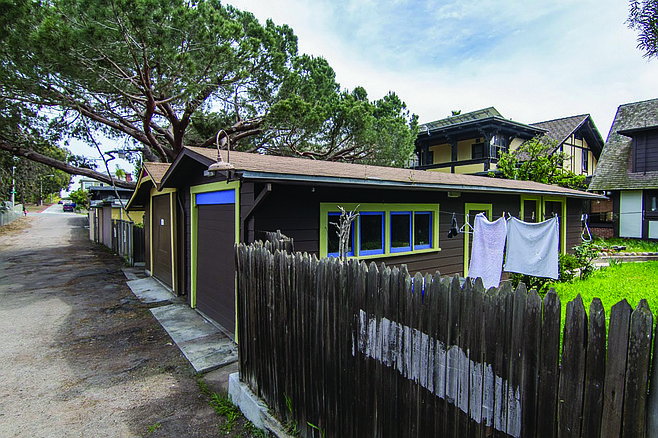 San Diego isn't waiting around for proof that granny flats can fly. The state requires the county to add 171,688 housing units over the next decade, and small cottages can quickly tap infill in idle backyards.

Alongside new, enabling state laws, the county keeps lowering the bar for homeowners to add a granny flat, also known as an accessory dwelling unit. Amnesty for illegal units, free floor plans, permits waived – and now, a big grant to further an even bigger experiment.

On October 30, the board of supervisors voted to accept $625,000 in state funds they will use on a five-year pilot program to test how how much new housing can be produced by providing bridge funding, a grant or loan, to property owners to build a small house in exchange for renting it at an affordable rate, possibly through a deed restriction.

Supervisor Dianne Jacob said she thinks the county's program "has the best chance of any of the programs we've seen, not just in the county, but anywhere, in any of the cities, of meeting the needs for affordable housing."

Most just assume the units will mean more affordable housing, where the resident pays no more than 30 percent of their income on housing, as SANDAG defines it.

But a study in 2018 refutes the idea that providing accessory dwelling units works.

The study looked at 57 California cities, finding that many counted potential affordable units towards low-income housing needs, which the state has allowed them to do since 2003. But none of the cities had zoning standards that would bind the units as long-term, low-income housing.

"Unless a city’s zoning code regulates the [unit's] maximum rent, occupancy income, and/or effective period, then the city may be unable to enforce low-income occupancy," says a 2018 study by Darrel Ramsey-Musolf, a University of Massachusetts assistant professor of landscape architecture and regional planning.

Supervisor Gaspar argued against putting the funds, provided by the Building Homes and Jobs Act, into cheap houses for a different reason. As former mayor of Encinitas, a city often seen as a role model for its cheap housing program, she said the money should be used to boost middle income housing through the density bonus program, instead.

"That's what we're lacking; middle income housing." (Both are lacking, according to housing numbers). Gaspar and Jacob both opposed inclusionary housing, which requires a portion of units in new developments to be low income.

"Please, look at the outcomes" of the programs, "because they're not actually producing the housing stock we're expecting them to." Encinitas is "on all sorts of housing panels now because of their successful granny flat program, but if you look at the numbers, they're slim. Over several years. Barely any production."

Encinitas offered an amnesty period, waiving permits to bring illegal units out of the shadows and get them online. But standards had changed, and people faced steep costs to bring them up to code. Often, they chose not to move forward.

Jacob said the unincorporated area, where most of her constituents are, is not Encinitas. Most people live on large lots where, unlike the city, they can add a small unit "whether it's 600 square feet or they go to the maximum, 1200 square feet."

There are 172,000 existing homes on lots, so if only 10 percent of the people put in an affordable house, it's a big number. "We have a huge opportunity in our unincorporated area."

The county's pre-approved floor plan program has just gotten started, she said, but "we've already seen an increase in the number of permits that have been pulled over prior years when we didn't have it."

Another incentive besides savings on design costs is the county's five-year fee waiver program that began in January. Combined, the incentives save property owners up to $30,000 per unit.

Even if the granny flat boom fails to bring relief to low-income renters, the extra homes can shelter seniors; provide living quarters for students and caretakers, or pull in rental income for retired homeowners.

They could help fill a critical housing need for farmworkers in the unincorporated area.

Jacob said the county "has a history of density bonus and what it has produced in the unincorporated area, and it's been zero, zilch."

Encinitas is a nice place. The last thing it needs is more low income subsidized housing. For crying out loud , some of you won’t be happy until the entire state is a ghetto.

They should not allow Granny Flats to become vacation rentals. ONLY year around!

When I went to college I rented a furnished a studio within walking distance to campus. That same unit is now on AirBnB thus taking it out of the rental pool.