Fire spinners out of control in Ocean Beach

Exploitation and monetization take over the peaceful easy feeling 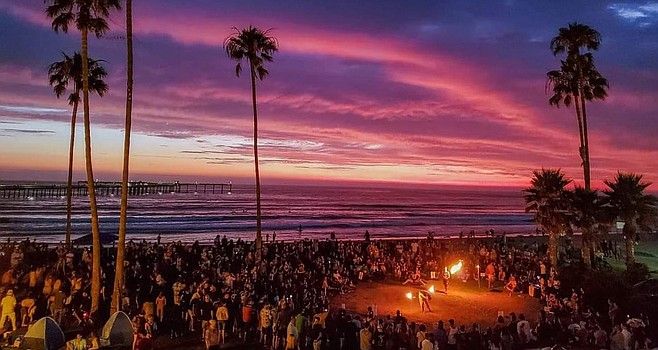 The peaceful gathering at the foot of Newport Avenue on Wednesday evenings in Ocean Beach has morphed into a full-blown event. Fire spinners, Hula Hoops, slack lines, a disc jockey, vendors, acroyoga, the drum circle, and large crowds are changing what was a low-key gathering into something that one SDPD Officer opined “should need a permit.”

The OB Hotel, located across the street, installed floodlights, and last week the sprinklers were turned on during the event. One member of the drum circle is challenging the use of floodlights, claiming they violate San Diego municipal code, as the "light pollution interferes" with the "enjoyment of the night sky."

However the biggest concern among the artists I spoke to is the behavior of OB Fire Nation, which they allege is careless and uses images of non-related fire spinners for promotion and creating an atmosphere of chaos.

“Many want to protest against the fraud and artist exploitation of a self interest group that has been non-consensually using other performers’ images to promote the company,” Melanie Ateselp told me. “Also, panhandling and capitalizing off non-associated individuals in a common space. The leader [Chris] has been asked several times to stop, but continues to market individuals as his product without their consent. They brought in DJs, which conflicts with the drum circle that, from what I understand, has been a staple of the community for over 20 years…”

Ateselp has been spinning fire for seven years. “Fire spinners are concerned with safety, we have taken precautions, but Chris is giving out ‘lessons’ and allowing newcomers to light up with little to no safety protocol, which goes against all tradition. For years, people would practice for months before ever lighting up a prop, and would have training from experienced performers, now it's turning into a free-for-all. A poor girl went to the hospital for chemical pneumonia because she was attempting to fire-breathe and inhaled lamp oil. There are FB pages showing them inviting anyone and everyone to participate.”

“My main concern along with many others is with the exploitation and monetization of fire spinners without their consent or knowledge in the public space we have used for many years, myself included,” Ethan said. “I'd say I've been going almost every Wednesday to the Ocean Beach gathering for nearly four years now to spin fire and have fun with my friends and meet new people in the community. One discrepancy here is we are not, in a business sense, performers. We do not collectively seek the attention of media groups or other communities for shows or profit. We go to the Wednesday gathering to enjoy each other's company and enjoy the beach and the community as a whole. Chris has become a detriment in regards to the space that belongs to everyone by claiming it as his own with signage, advertising, and tip collection.”

“Yes, this has been discussed at length,” Ateselp says. “Artists like the free-flow nature of the meeting. Its grassroots are a community skill share. The drum circle has been active for years without a problem. The normal ebb and flow of the crowd traffic has been disrupted and amplified because Chris wrongfully marketed it as his own formal event."

Jessica Keeler stopped attending the event all together. “I spin fire,” she said. “I've been practicing my craft for about six years now. I attended the Wednesday circle almost every Wednesday for over two years up until a couple of months ago before I relocated. At first, I didn't see anything wrong with what was happening, but as more and more people started opening up to me about how much they could feel the atmosphere change, how they felt pressured to put on a show, rather than practice freely and comfortably due to the attention being literally drawn not just from our normal act of spinning but from someone intentionally trying to draw attention to their brand to gain tips, I started to realize it was becoming an issue. When Chris brought the DJ in, drowning out the sound of the drummers, it really started to hit me."

One anonymous fire spinner I spoke with expressed safety concerns, “I have been training in the fire arts for four years and have taken more than four fire safety-training courses, one per year, because that’s how seriously it should be taken. The way that Chris has been operating is dangerous and shameful.”

Ali Cat has been a professional fire performer for about six years, regularly attending the weekly Wednesday meet-ups which she says “had been a truly inspiring place for the arts community to gather and practice – yogis, flow artists, musicians, slack-liners alike…a couple of months ago, Chris showed up out of the blue, he didn't really spin fire but was eager to learn. The community naturally accepted him with open arms. However, soon he began the public promotion across multiple media platforms, inviting people to come and watch a free show put on by OB Fire Nation, a private troupe available for hire, using footage of me and my friends to promote his performance troupe, unbeknownst to us. I confronted him about this multiple times.... I felt like I got through to him and we came to an agreement about ceasing some of the troubling behaviors, the next week he would start right back up again.”

I’m cool with the fire spinning but you can’t operate a business without a license and paying taxes. If that’s what’s happening people need to call code enforcement.