“Users, particularly Mayors, can access the platform via their mobile devices” 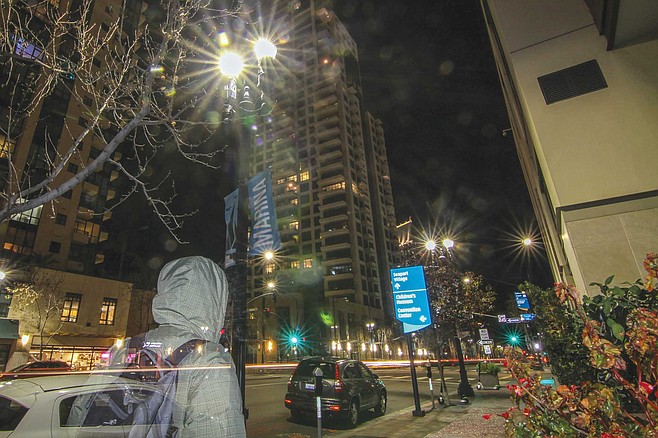 What is the city of San Diego up to with its controversial installation of 4200 streetlights that spy, reported here in February?

Although the city council has yet to take up questions of privacy regarding the program, a November 11 Union-Tribune dispatch quotes a statement from GE Currents, the snooping network's vendor, denying the company has played hanky-panky with the cascade of information vacuumed up daily by the system.

"The data collected from those nodes is exclusively owned by the city, and any assertion otherwise is wholly inaccurate," says GE Current, per the newspaper report.

"Unless explicitly instructed to do so by the city in accordance with all applicable law, (GE Current) does not provide that data to any third parties."

Maybe so, but emails obtained from the city under the California public records act along with a purchase order posted on the city's procurement website, show that at least two other vendors have enjoyed at least partial access to San Diego’s data, further complicating questions of privacy and confidentiality facing city hall.

As the net of corporate vendors with custody of the information grows beyond the city's direct control, so do questions from those who fear there is no practical way to fully safeguard the privacy of those swept up in the city's virtual dragnet.

According to a September 17, 2018 purchase order, Canadian-based Genetec, a purveyor of electronic security systems ranging from those for facial recognition to license plate readers, was paid $456,000 "for the purchase of a hosted and fully managed Smart City Analytics platform."

With "Total active storage capacity of 49 terabytes of Cloud storage" and "integration with San Diego PD Computer-Aided-Dispatch," the system was said to provide "live and archived video streaming."

But the ostensibly city-owned video from cameras on the streetlights hasn't always been furnished to the city by its contractors in a timely way, a police department email shows.

"Since the January 28 training, I have been in constant contact with GE and Genetec regarding requests for evidence via the Intelligent Streetlight program," says a February 25, 2019 email from SDPD Lt. Jeffrey Jordan to other police and city officials.

"In some cases, the requests are being met with a 'failure' or 'pending' response. There are many reasons for this occurrence, which I will describe at a later date.

"For now, if the response following a request says 'failure,' it is unlikely we will be able to get video from that optical node.

“We have identified about 300 nodes that are not currently functioning, and we are in the process of developing corrective action that will bring them on-line."

"Additionally, if the request says 'pending' after [an] evidence request and does not produce the requested video after 2 hours, please 'retry' an additional time.

"If after the second request the video is not retrieved, please reach out to myself or Sgt. Bill Miles immediately to work with our partners to see if we can address the issue and retrieve the requested evidence."

The email continues, "Please pass on this information to all authorized users of this program within your respective investigative groups and try to keep requests no longer than 20 minutes per streetlight at a time.

"This means if you need an hour of video from a single location, please break it up to 3 requests at 20 minutes each, since that seems to be producing the best results."

Chicago-based Xaqt, another vendor listed on the purchase order, was paid $276,000 for one year's use of "a hosted and fully managed Smart City Analytics Platform."

Both the Genetec and Xaqt systems were to be operational by June of this year. Between Xaqt and Genetec, the extended cost to the city totaled $732,000, per the document.

"Users, particularly Mayors, can access the platform via their mobile devices, as well as share the insights within tools such as Slack, Cisco Spark, or Amazon Alexa," noted a 2017 story regarding Xaqt CEO Chris Crosby in CIO Review.

My takeaway is that after spending some sorely-needed-elsewhere funds, the city isn't getting the payoff from these cameras. Could it be that those cams don't really deliver the goods?

So, the always cash-strapped city, now headed by not-so-strong mayor Sunny, dumped $3/4 million down a rathole with little to show for it. The cop who is charged with getting the goods writes emails expressing his frustration at the poor response and results.

If you reside in the city of SD, you must ask yourself what better use that fat sum of money could have provided. For starters, look at the execrable condition of many streets--even after Sunny's program to make them better--and wonder how many miles or yards or streets were not resurfaced with those funds.

The UK, aka Great Britain, is now supposed to be the most videoed society in the world. Curious isn't it that it is generally seen as polite and law-abiding? Actually that isn't so; the place is plagued by "yobs" (what we here would call thugs or bros) who can be counted upon to disrupt the public peace. The courts in Merrie Olde England can't keep up with the petty crime--the bewigged judges were trained for a different sort of society. So, to make up for the criminal justice breakdown, the bobbies, aka "Peelers" or local police use surveillance cams to fill the gap. If folks can't behave properly in England/Wales/Scotland, where can they be expected to?

Are we headed in that direction? Yes we are, and this misbegotten and mismanaged smart streetlight system is just evidence of it. Will the city get it working? Who knows. If it is made to work as promised, will it cut down on street crime and vice? Don't count on that either. What you can count on is more financial waste and more dead-end attempts to make the city crime free. Good luck.

What I do know is the closer-distance MTS spycams definitely have robbed privacy. Even more, as MTS has their 'private' public property. Paid by taxpayers.