“White water views from every single room in the house” 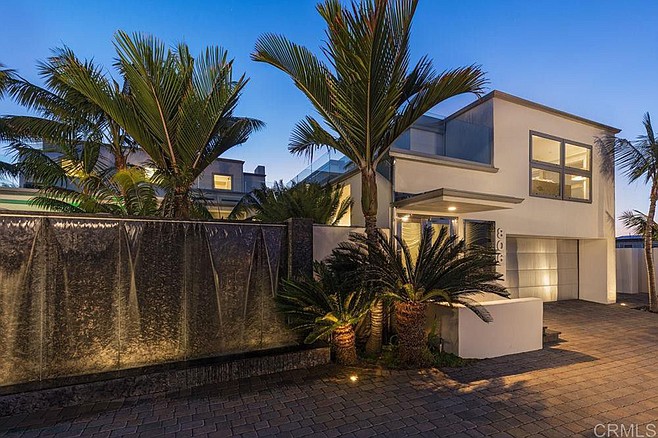 According to promotional materials from Realtor.com, the 5300-square-foot home boasts “white water views from every single room in the house” and is located on a half-acre cul-de-sac lot along “the best ocean front street in Encinitas.”

Billed as “truly one of the most iconic houses in Encinitas,” the “contemporary paradise nestled high above the Pacific” features “crisp, clean lines, a white palate and a soothing 40-foot waterfall wall.

“Bright and open living spaces are accentuated by walls of glass, an open floor plan and voluminous ceilings,” with tilt-up and retractable windows “providing a continuous flow between the indoor and outdoor spaces.” 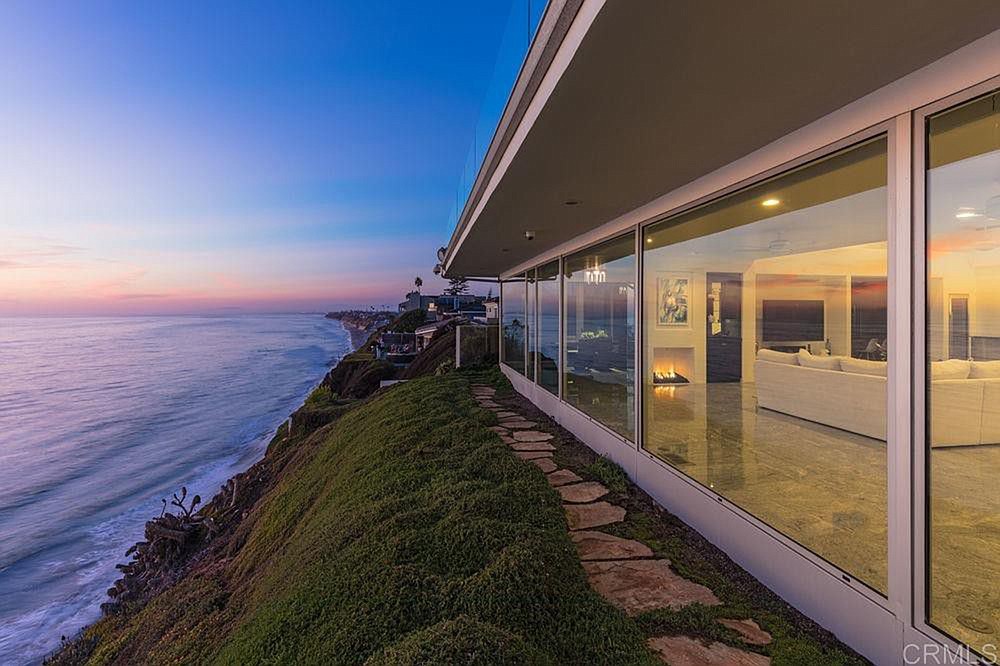 Watch the seas rise from the comfort of your couch!

The expansive kitchen invites you to “unleash your inner chef” and is outfitted with Azure granite, a Brazilian stone known for its deep veins that “give a royal look to any surface.” Dinner guests can “watch the waves crasn” from the adjacent formal dining room; later, the new owners can later retreat to a spacious master bedroom with its own office, private ocean view patio, and “spa-inspired” bath with steam shower and spa tub.

Additional living areas include a 300-square-foot walk-out basement and a studio guest apartment with its own kitchen and laundry.

Outside, the home adds another 3500 square feet of deck space for outdoor entertaining, including oceanfront balconies and leisure space surrounding a saltwater “grotto pool” with multiple waterfalls and light features, along with a koi pond surrounded by mature tropical landscaping.

Outside the grounds, the home “is in close proximity to everything you need,” located between beach access points at Moonlight and Swami’s and “just steps from the heart of Downtown Encinitas, where you will find chic boutiques, quaint cafes, and aromatic coffee shops.”

Public records indicate ownership of the home lies with Kean and Janice Ganan. Mr. Ganan is an Orange County-based anesthesiologist, Mrs. Ganan is a businesswoman whose online profile lists her as the director of a defunct website. The property’s last public sale pre-dates the reported home construction date of 2005, though public records indicate an original build date of 1955, suggesting considerable remodeling was done earlier this century.

A common tactic in avoiding property tax reassessment when building new luxury homes is to incorporate a small portion of an old dwelling being demolished — often as little as a single wall — into the new house. This classifies a project as a remodel rather than a new build. The current assessed value of the parcel is just over $1.4 million, with more than two-thirds of that being attributed to the value of the oceanfront land.