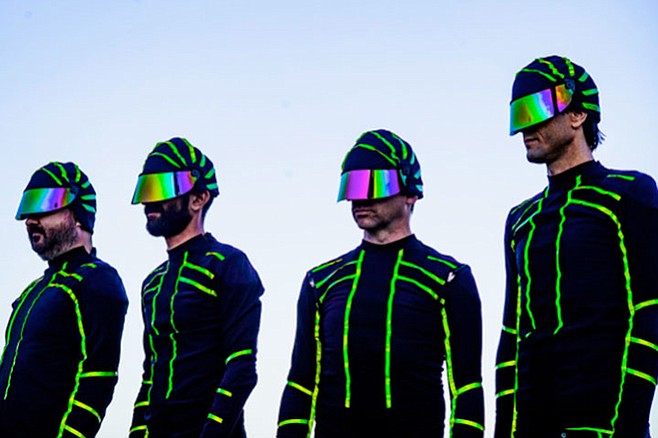 The Locust, who recently reunited and played their first gig in four years at the Desert Daze Festival, released a typically bizarre video for their track “Recyclable Body Fluids in Human Form.” The band also debuted new Tron-meets-Devo style insectoid costumes and announced plans to release their first new music since 2007’s New Erections album, which was essentially the grindcore punk group’s last flight other than archival releases such as 2010’s The Peel Sessions and a 2012 compilation The Gold Standard Labs. Catch them November 7 when they swarm the Music Box, alongside Silent and the Creepy Creeps

A young Barcelona electro-pop group, High Pijama, found Happy Ron Hill’s decade-old acoustic song “No Angel” and turned it into a futurepop Americana dance track. “This was somewhat surprising to me, as the song was one of the only serious and least danceable songs on my album,” says Hill. “Even more amazing is the theme of the song is about an older person telling his older partner that he isn’t interested in younger women, but High Pijama have turned it into something for younger people to dance to. They’ve done an amazing job, adding drums and remaking the old track into something that sounds entirely new.”

In response to Eve Selis' online post about no longer working together with Marc Intravaia, the guitarist replied “Eve and I remain friends and will always be friends. We did not have a fight or a blowout or anything of that nature. The fact is we just drifted apart musically. It’s been happening for the last couple years and now she is on a much different path than me.” The Kearny High School grad has been writing, recording, and performing with the Selis Band since 1991: their full-length Family Tree was nominated for Best Americana or Country Album at the 2012 San Diego Music Awards. Selis and Intravaia (aka “Twang”) also played together with the collaborative quartet Berkley Hart Selis Twang.

Weatherbox is back from a hiatus with a new song that was recorded live in studio for Half Way Home earlier this year, “A Band Astride Clouds.” Another Half Way Home session recorded by fellow locals Secret Fun Club features them performing “Orchestral Maneuvers in the Darkthrone.”

A new Ariel Levine single is streaming online, “If This Isn’t Me,” along with a music video directed by Grant Reinero (Focus Group, Stewardess). “The songs take a new direction for me,” Levine told the Reader, “as they are very personal and focus on my own life experiences, inspired by some recent events and hardships in my life. No plans to play these new songs live, they may just live in the recorded world. However, some members of my band Ariel Levine & Mechanical Royalty are considering coming out of hiatus and forming a new three-piece with new music.”

A reissue of Cage's fifth album Science Of Annihilation, due November 15 and retitled Science Of Annihilation Re-Annihilated, has been expanded, remixed, remastered, and partially re-recorded, with two unreleased bonus tracks and drum parts re-recorded by current drummer Sean ELG. Their Darker Than Black album will also be reissued, for the first time as a vinyl double LP, with 500 units pressed in two colors: “darker than black” black and “blood of the innocent” red. They’ll spend late November and early December on a tour of Belgium, France, Germany, and the Netherlands.

Cattle Decapitation Geocidal Tendencies tour with Atheist kicks off November 22 in Austin and wraps at Brick by Brick on December 22.

Hirie's third album Dreamer is being supported with a national headline tour that ends in San Diego at Observatory North Park on November 23. A video for the album's fourth single "Message In A Bottle" is streaming online.

Thousand Below is streaming a single for "Chemical" from their second album Gone In Your Wake, along with a video for a new track, "Disassociate," as they tour in support of the release with Of Mice & Men.

Blink 182's new lineup has released several singles off their new album Nine: "Darkside," "Happy Days," "Generational Divide," "Blame It On My Youth," and "I Really Wish I Hated You."

The New Regime's new EP Heart, part one of a four part EP series called Heart, Mind, Body, & Soul, will be followed November 22 by part two, Mind, with videos now streaming online for "A Way To Feel Again" and "Turning a Blind Eye," both directed by John David Moffat (the latter is a performance video filmed while touring with Angels & Airwaves this past September and early October).

The Zeros announced new music on the horizon, and the influential reunited punks are reissuing their classic single "Don't Push Me Around" in an autographed starburst vinyl pressing with an original insert, released by Bomp Records.

Having tracked their EP The Cage at Bellville Studios in Cape Town, South Africa, recorded with Theo Crous (guitarist for Springbok Nude Girls), Latex Grenade is hitting the South African shores again this month for their second visit and tour of the country.

Sluka, a FAA gold-seal-certified flight instructor (with a commercial pilot’s license and over 3000 hours of flight time), has a new album, Ready to Connect, with a single and video for "Hey Oh."