Only 10 kids showed up for monster movies 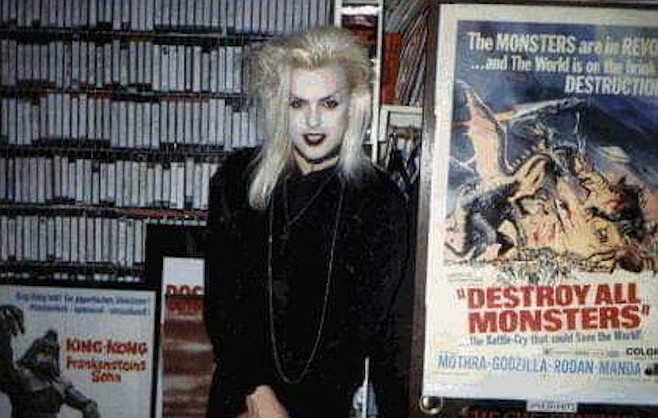 The north Escondido resident plays guitar for local Duran Duran and The Cars tribute bands and his monster-moniker is his stage name, partially because he stands 6 feet 4 inches and he regularly wears boxy-shoulder-jackets.

“Last night on Halloween,” he said, “I dressed as vampire Lestat de Lioncourt. I pulled out my foldable table, set up my 16mm projector and purple strobe light, and projected a one-hour film on the side of my house.”

“What movie did you play?” I asked him.

“I got a bunch of film prints,” he responded, “like old TV commercials and monster movie previews of Frankenstein, Dracula, The Mummy’s Hand, Creature From the Black Lagoon, The Werewolf, and cartoons that were about Halloween. I then had my friend splice up a reel for our trick-or-treaters.”

Valentino is used to having “about 300 kids” rush his house, and watch classic-monster movies in his yard, as they chomp on their treats. On this year’s Halloween though, there was an eerie silence in his neighborhood, located southwest of Daley Ranch.

“Only ten kids showed up,” he said, “it’s my worst Halloween ever.”

M.J. Ferrat from San Diego remembers when Valentino used to play monster movies at an old theatre in North Park in the 1990s; almost 25 years later, they still trade monster memorabilia with one another. “Some of the parents are bringing their kids trunk-or-treating to churches because churches have generators,” Ferrat said, “and in case there’s a blackout they’ll be safer there, than on the dark streets. ”

On October 30, SDG&E shut off power to 25,000 customers throughout San Diego County, including parts of Escondido and Valley Center — “due to high winds and dangerous weather conditions.”

On Halloween the next day, at 4 pm, power was restored to about 20,000 customers affected by the safety power shut offs, and 5,000 customers remained without power. By 6 pm, SDG&E said that everyone, with the exception of one, got their power restored.

Some residents that lived in the power outage areas, said on their neighborhood online forums, that they had extra candies leftover due to less trick-or-treaters.

Valentino attains his “lowest Halloween attendance ever” to the blackouts.

“The parents didn’t want to come here because it is super dark with the big trees,” he said. “And if the power went out again, it would be chaos.”

Ferrat agrees. “Valentino’s house reminds me of the house in Poltergeist,” he said, “I wouldn’t want to be there if his projector went down. Even with the street lights on, his street’s dark.”

Valentino said there were break-ins on his street in the summertime.

“This used to be a good neighborhood,” he continued, “but in the last couple of years, crime has gotten worse in Escondido. I don’t blame our neighbors for not coming out to trick-or-treat, they have to stay home and protect their family and belongings. If there was another blackout while they’re out trick-or-treating, their house [was vulnerable].

“Halloween used to be balls-to-the-wall wonderful. I’ve gone from having school buses full of kids coming, with more than 50 kids in my front yard at a time, for years — to last night: there were like ten kids the whole night.”

Where was this advertised ? People can’t come if they don’t know about it.

SDGE had to get in the fun, doing its form of spooking.