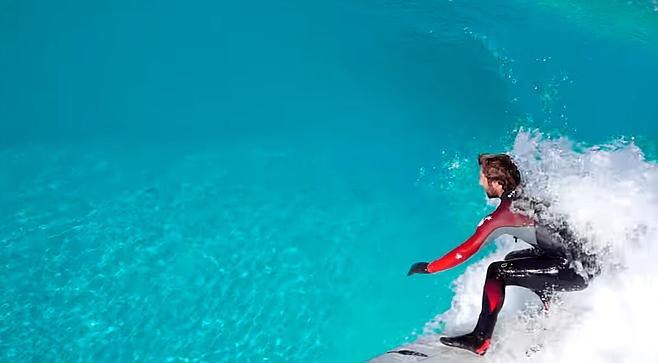 The 90-acre Oceanside Swap Meet site was once hyped as a perfect home for a new Chargers stadium. That ten-year-old rumor was just idle folklore.

But get ready for an attraction that may be just as sexy: A wave park similar to Kelly Slater’s Wave Pool near Fresno.

That rumored plan was confirmed by Mayor Peter Weiss who said he had just learned from discussions with Zephyr Partners that the Encinitas-based developer will be presenting preliminary plans to the city on June 13 to devote 35 acres of the the property to a wave park.

The primary draw would be a wave-making machine that generates “perfect waves” every time. The format has been successful that been successful at wave parks in Waco and Austin Texas and at Lemoore, California near Fresno, home of Kelly Slater’s park.

The Oceanside Swap Meet, launched in 1971, held its last weekend event April 28 Its 90 acres on Mission Avenue in the San Luis Rey Valley, was originally built as a four-screen drive-in movie attraction. It was purchased by Zephyr Partners for an undisclosed sum.

Weiss says the early plans offered by Zephyr call for 35 acres to be devoted to the wave park and accompanying restaurants, businesses and hotel rooms that would all be aimed at the surf culture. Another 20 acres would be set aside for open space, while the remainder 35 acres would be devoted to residential homes, public roads, and other public needs.

But is having a wave park in a town with 3.5 miles of coastline and such famed surf spots as the Pier and the North and South Harbor Jetties kind of like bringing coals to Newcastle?

Not at all, says Travis Macks, co-owner of The Surfboard Collective which sells used surfboards.

“Just because you have three-and-a-half miles of beaches doesn’t mean you always get good waves,” says Macks. “We are fortunate to get good conditions more often than other places, but there are gaps. Not all months or certain periods of time are good.”

Macks says a wave machine can create something Mother Nature cannot: a perfect wave every time. “To have a consistently good wave is a big draw. It’s good for surfers and non-surfers who want to learn.”

While Mayor Weiss says he has heard that Zephyr is speaking with two different wave generating companies, Macks says the word on the street is that the Wave Garden company, bolstered by its new “Cove” technology, will be the company that will be selected for the new Oceanside projects

“Wave Garden launched in the Basque country in Spain,” says Macks. He says he is aware of at least three wave park operations. Wave Garden operates an attraction in Austin, while a company known as BSR runs the American Wave Machine in Waco.

“The best one in my opinion is Kelly Slater’s Surf Ranch. I don’t know what the status is, but I actually saw the blueprint of the surf ranch they were planning at the Embarcadero Marina Park in San Diego.”

Macks says it remains to be seen if the arrival of a Kelly Slater-style wave park to Oceanside may overwhelm the local surfbreaks with out-of-town surfers who come to Oceanside for the new attraction and then pop in the Pacific.

“Attracting more surfers to Oceanside is a double-edged sword. It may bring more people in the water, but generally speaking I think it will be a good thing for Oceanside. I think this will help everyone in the local surf business. Surfing has done nothing in my life but bring good things.”

And don’t even bring up the Franken-wave issue to Macks.

“That’s the wrong way to look at it. Surfing will be in the next Olympics. It is a big deal that surfing has arrived as a competitive sport.” He points out that in traditional surf contests, competitors are subject to the luck of the draw as far as the quality of their wave. “This levels out the playing field,” Macks explains. “Everyone gets the same wave. And I guarantee that one day the Olympics will use this technology.”

Macks says the only hiccup he is aware of was an unfortunate illness at the BSR American Wave Machine park. “Someone got a brain-eating amoeba. But it was not necessarily from the water. He could have gotten it from somewhere else on the grounds. They now have the best water filtration system. As long as they are sensitive to all the environmental needs and do no harm to the local ecosystem, I see no reason why this wouldn’t be a great thing for Oceanside.”

Brad Termini, CEO of Zephyr Partners, did not respond to a request for comment. Zephyr has built homes in Orange and San Diego Counties including the controversial 16-acre bluff-top Del Mar Resort. The Level 15 townhome project in Escondido and the The Block units in downtown San Diego.

Meanwhile the former vendors at the old Oceanside swap meet have relocated to a weekend swap meet in Escondido, moved into an indoor bazaar at a strip mall on Mission Avenue and Crouch Street in Oceanside, or have given up on swap meets altogether according to Gino Carpinelli who promoted the Oceanside swap meet.

An email to Wave Garden requesting comment was not returned.

Really? A wave park is the best use of the property? Proof you can't fix stupid.

Lol that’s what used to be there.