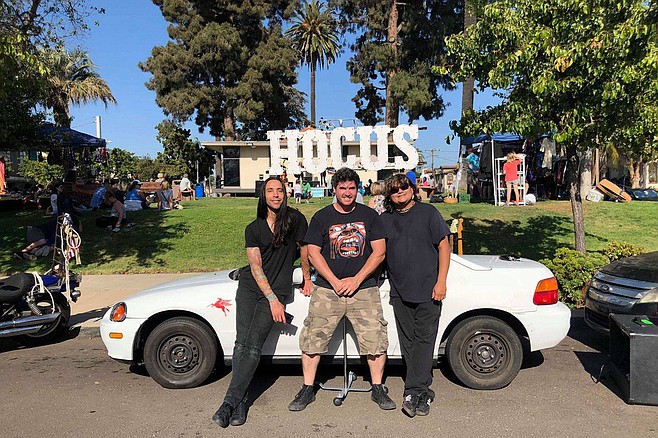 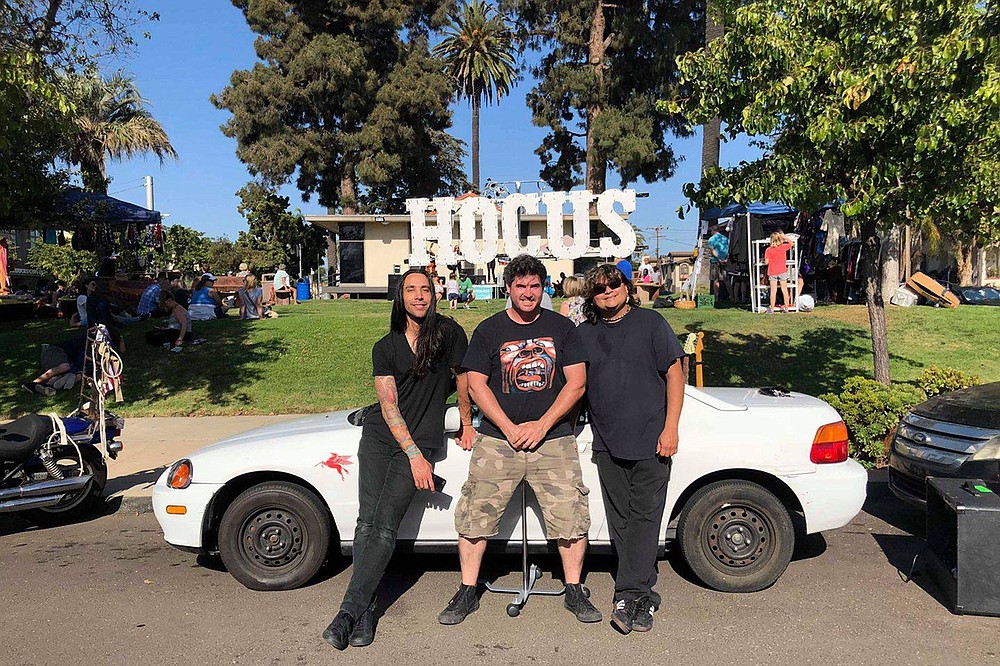 Celebrating their tenth year, Hocus is fronted by Lando Martinez (aka Fat Lando), a self-described “Mexican from Texas” who retired from the U.S. Navy in 2008 after serving 20 years. Their debut album Better Than You was nominated Best Local Recording at the 2010 San Diego Music Awards, and they’ve appeared on local television shows, including Fox 5’s San Diego Morning News. Their recently released Live at the Casbah album (streaming on Spotify and for sale on iTunes) features concerts favorites such as “Bipolar Girl,” “My Insanity,” “Pain Reliever,” and “Boneshaker,” mostly recorded last December by Mark Haemmerle (Starcrossed, Kitty Plague) but not originally planned for release. “After hearing the playback, we thought, ‘Wow, that really catches our energy and focused recklessness,’” says Martinez. “I was suffering from the flu, so got some frogs coming out every now and then. At the end of the second song of the set, ‘Here I Go,’ the skin of the bass drum tears. Luckily, the sound guy Ken had some duct tape, and we continued the show. After every song, we had to re-tape.” The album includes two holiday tunes, “Ugh Christmas” and “It’s Christmas Time,” and they recently uploaded a Facebook video for their track “Smashed Our Car,” a tribute to vintage teen anthems about young people dying in auto mishaps. “We recorded the song slow where it emulates that sound of the era, but we sped it up for live performances,” says Martinez. The Park & Rec bill includes Allweather. 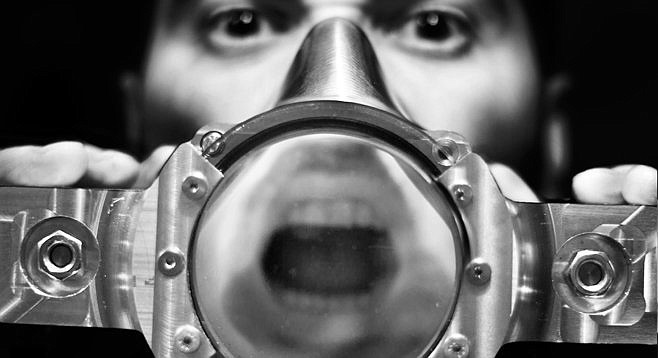 Tristan Shone, aka industrial drone-doom one-man band Author & Punisher, left Boston for UCSD in order to earn an MFA, and ended up staying long enough to become a local icon of ethereal electronica. After signing to the Album Leaf’s label Relapse Records last year, Author & Punisher released its fifth full-length, Beastland, recorded at K Street in San Diego and engineered by Shone with John Cota (Death Eyes). Additional recording was done in Las Cruces, NM with Jason Begin (vytear), with co-production by Braden Diotte (Neurosis, Tarantula Hawk), and mixing by Kurt Ballou at God City. Solo, Shone performs with custom electronic facemasks and idiosyncratic homemade equipment, both vintage and modern, though the complexity of his compositions and the limits of his gear means that local live appearances only happen two or three times each year. Shone has also collaborated with the Satanic Temple of Los Angeles for a live performance of his “Destruction Ritual” at a satanic mass held in L.A.’s Das Bunker, and he chose a gig at the La Jolla Athenaeum for the debut of newly engineered masks with names like “Human Cud Bag,” “Blank Form,” and “Bass and Hiss.” For this date at the Casbah, opening acts include Xasthur and Wear Your Wounds. 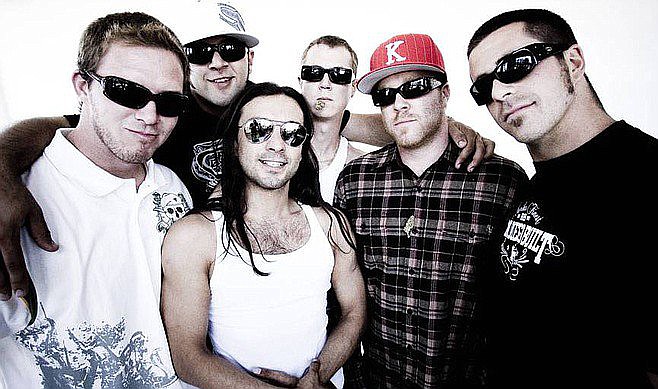 This year’s San Diego Bay Fest features local island acts such as Tribal Seeds, Band of Gringos, and Hirie, as well as Hermosa Beach’s Fortunate Youth and Jamaican singer Don Carlos. However, for many attendees, the day’s main musical draw will be local punk-reggae heroes Slightly Stoopid, who played their first paid gig at the all-age Soma club in 1994. An argument can be made that they’re now the most consistently successful such act our city has yet produced. They were introduced to the world as heirs apparent to bro-boogie band Sublime, when Point Loma High School grads Miles Doughty and Kyle McDonald caught the eye of Sublime’s since-deceased singer Bradley Nowell, who signed them to his own Skunk Records label and released their first two CDs. Over two decades later, their constant tours are nearly guaranteed to fill any venue that hosts them, and they even have their own signature cruise package. Their ninth studio album dropped last year, Everyday Life Everyday People, preceded by singles for “If You Want It” featuring Alborosie and “Higher Now,” featuring Chali 2na (Jurassic 5). Other guests on the album include Ali Campbell (UB40), Sly Dunbar (Sly and Robbie), G. Love, Don Carlos, and Yellowman. 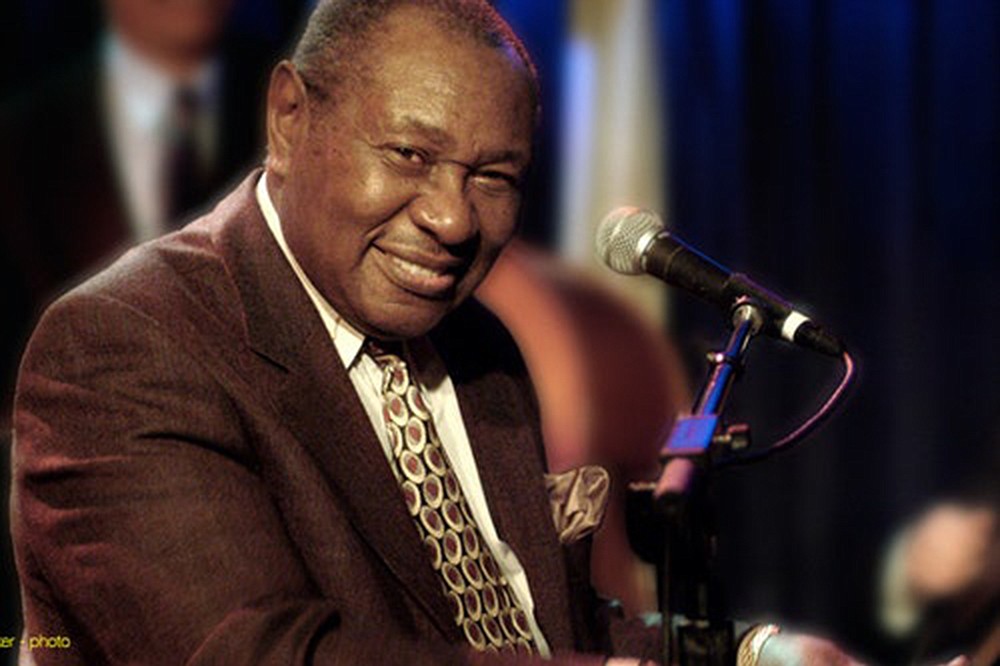 Freddy Cole will honor his late brother, Nat “King” Cole, with a Centennial Concert, in collaboration with Jazz at the Ballroom. The Legacy Band featuring the 87-year-old Cole will perform jazz standards from the Freddy Cole Quartet’s extensive catalog. It’s been awhile since the singer-pianist played San Diego, though his 2010 appearance at Little Italy’s Anthology is still fondly recalled and discussed by online aficionados in the Cole community dedicated to keeping the music alive. Freddy Cole has released nearly three dozen albums since making his recorded debut in the sixties, with his most recent from last year, My Mood Is You, earning a Grammy nomination for Best Jazz Vocal Album. The record features guitarist-arranger Randy Napoleon (who has been playing and recording with Cole since 2007), pianist John DiMartino, bassist Elias Bailey, drummer Quentin Baxter, and tenor Joel Frahn, with arrangements by Napoleon and DiMartino. For this appearance at the Inn, complimentary wine from Oceano Winery will be available, and guests will be able to order from a custom menu of gourmet bites prepared by Executive Chef Chris House. 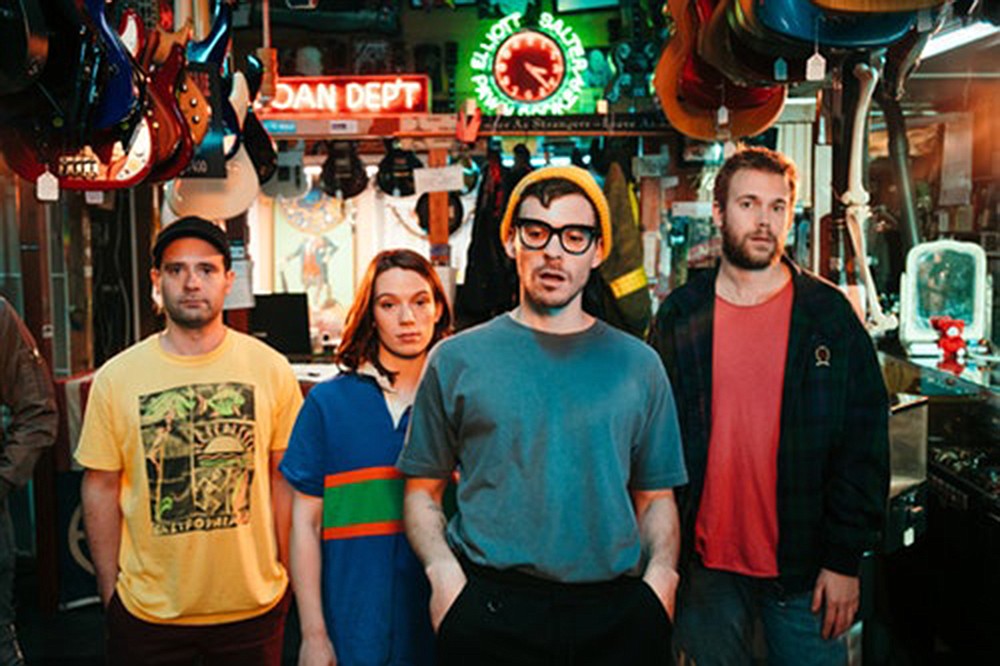 It’s been only a few months since singer-songwriter-producer Matthew Koma (whose early career included working with Interscope Records honcho Jimmy Iovine) and songwriter-producer Dan Book embarked on their very first tour as Winnetka Bowling League. Their Soda Bar gig will be one of the first times they’ve made it all the way down from their usual L.A. haunts, despite tracks such as “Feeling California” and “On the 5” receiving frequent local radio and podcast play this year. The former (playlisted on Sirius XM’s’ AltNation) receives area favor for celebrating four-wheelin’ love on highway 5, while the latter track comes right out and namechecks two of the band’s main inspirations, the Beatles’ Revolver and the Beach Boys’ Pet Sounds, a surefire way to decorate one’s self with gilt by association. Other acts they cite as preferred precedents include Squeeze and early Elvis Costello & the Attractions, which comes as no surprise if you spin the two dreamy pop singles from their recently released second EP Cloudy With a Chance of Sun, “Kombucha” and “Slow Dances.” The bill includes Feelers.