“Vanity and pride are different things” 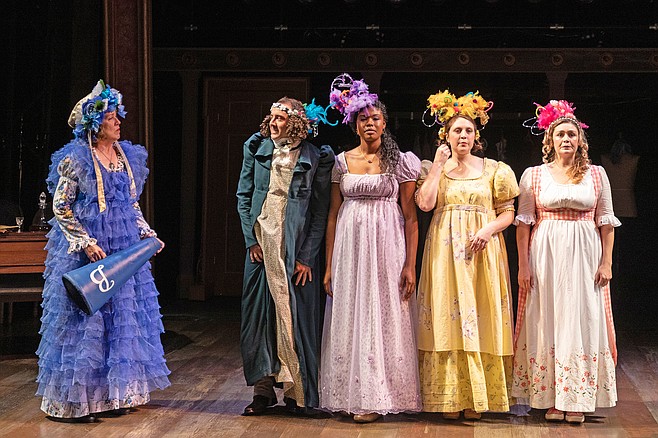 Jane Austen published Pride & Prejudice in 1813, and two centuries hence, its story of sisters seeking eligible husbands in the genteel English countryside has been retold ad nauseum. Many plays, movies, and television series have held the story in high regard, depicting it with period dress and the sort of reverential treatment of dialogue typically reserved for Shakespeare. More recently, less serious adaptations have attempted to update it to suit modern tastes, to the point of weaving zombies into the plot.

Its most recent stage adaptation, playing at the Cygnet Theatre through June 16, sits somewhere between these approaches, punctuated by cross-dressing actors and the occasionally glaring presence of a disco ball. Amid its broad-stroke comedy occasionally emerge the sharper lines of Austen’s wit, less aggressively funny than clever, almost to the point of wisdom. For example, “Vanity and pride are different things, though the words are often used synonymously… Pride relates more to our opinion of ourselves, vanity to what we would have others think of us.”

The distinction resonates, particularly when delivered within a plot focused on young women and men pursuing life partners based on social standing and wealth. We are told which sister is the most beautiful, which the silliest, and which the most accomplished at playing music. The men are likewise classified, according height, income, occupation, and manner.

In all forms, the story is predicated on the promise of lasting romance, and an audience rooting for favorite characters to wind up together. Will Lizzy, the brightest sister, pair with the boorish clergyman, the handsome soldier, or the brusque gentleman? Will the beautiful Jane successfully beguile the object of her fancy, or settle for a man less obviously deserving? They face competition from the daughter of a local knight, from jealous highborn ladies, and from one another.

Considering this now tried-and-true plot construction, perhaps the most successful Pride and Prejudice adaptation of the 21st century has been the glut of reality game shows arising from The Bachelor franchise. In these shows, a single, telegenic bachelor is pursued by two dozen women, whom he individually discards until one chosen paramour remains (the gender roles are reversed on its sister show, The Bachelorette).

But however high its ratings, The Bachelor has been an unmitigated failure so far as romance is concerned: its matched partners invariably split within months of taping. It ultimately reinforces the value of having a talented writer such as Austen preside over such a story’s telling. Its contestants, however handsome or pretty, have one prevailing characteristic in common: they wish to be seen and admired by the general viewing public. Thus, by Austen’s definition they are guided by vanity. If the show could lure contestants imbued with pride, its attempt at matchmaking might succeed beyond a brief, televised moment, and it might finally prove a worthy successor to the retelling of Pride and Prejudice. Instead, it adds to the heap of adaptations in vain, and proves beyond doubt: there is simply no substitute for good writing.