Could this be the first music in the world? 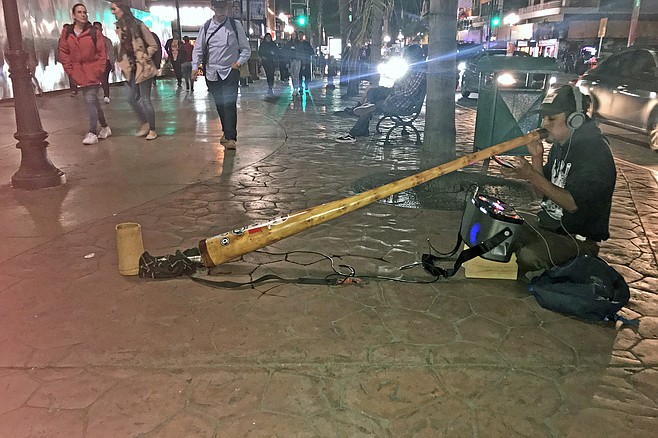 You can hear him long before you see him, the low honking sounds, a block away. This is Sunday night, Avenida Revolución, TJ, crowded. Jonathan Antonio Martínez Machain sits cross-legged on the sidewalk with a long horn like a Swiss alpenhorn in front of him, pulsing away to drumbeats coming off a mini amp. The longer you listen, the more you hear complex rhythms and even sort-of-harmonies. The strangely hypnotic honks come out of the end of 10 feet of hollowed-out pinewood, right where he has placed a little money bucket for contributions. He’s playing a full-on didgeridoo.

“Most people use eucalyptus, as the Australian Aborigines do, but pine works fine,” he says, when he comes to the end of a, well, tune. “This was a Christmas tree.”

Quinceañera parties cruise past, teens in tuxes and frilly dresses standing up through the open roofs of limousines. They hear Jonathan and start grooving to his rhythm, then break out into a cheer before they pass on by. 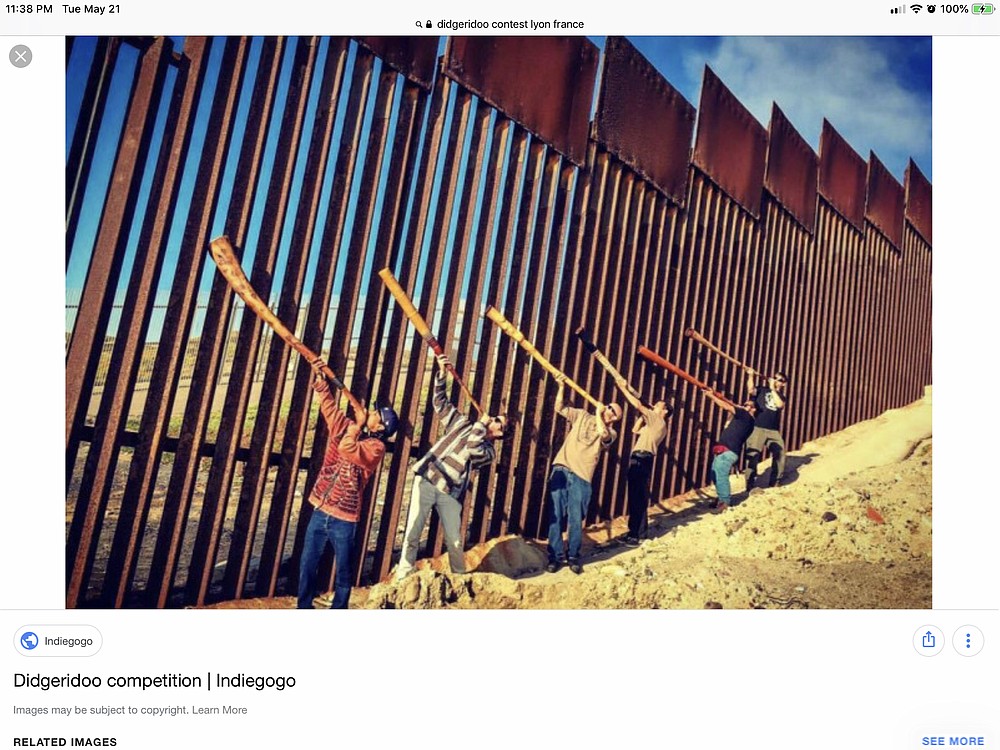 “...And the walls came tumbling down!” Jonathan and didgi friends trying to emulate Joshua at Jericho by blasting the border fence with their didgeridoos.

“But how do you get enough breath to keep blowing?” says the gent standing next to me.

“I’m not blowing,” Jonathan says. “I’m vibrating the lips. I do pressure with my lips. Hold the breath! Zzbwzbwzbwzbwzbwzz. If you blow, you run out of breath, very fast. It’s like playing a trumpet, but it requires more techniques. Like circular breathing.”

It seems didgeridoos are taking off worldwide. They’re being incorporated into the avant-garde music scene. Groups are forming. The medical profession is even saying that playing a didgeridoo is the best thing you can do for your lungs.

Now they’re making multi-note drones. “This didge has three natural tones,” Jonathan says. “This one is C-sharp.” And he booms out a low sound that could be a foghorn. “This is B-flat. And this is G-sharp.” Now he barps a higher pitch that sounds like a bassoon. “They are natural horns. But they’re not just from Australia anymore. Mine is sponsored by Mob Didgeridoo. They make didges in Riverside, California.”

Jonathan’s playing maybe the most ancient musical instrument created by man. Some new research says Aborigine people could have made it to the continent of Australia up to 80,000 years ago. (The first native Americans came across the from Asia only 15,000 years ago.) The didgeridoo might have been adopted any time from 1500 to 40,000 years ago.

Now the sound takes on a resonance that makes you almost judder. Could this be the first music in the world?

Whatever, it’s flourishing again. “You’d be surprised,” Jonathan says. “I may be the only player in Tijuana, but didge players are everywhere. I’ve started making them! I call mine ‘TJ-ridoos.’ And in two weeks, I’m going to Lyon, France for the biggest didgeridoo contest in the world! That’s why I’m out here playing late. I still haven’t got my airfare.”

The guy next to me leans over and hands Jonathan a couple of notes. “Animo,” he says. “Buena suerte.”