No more prohibitions for You & Yours Distilling 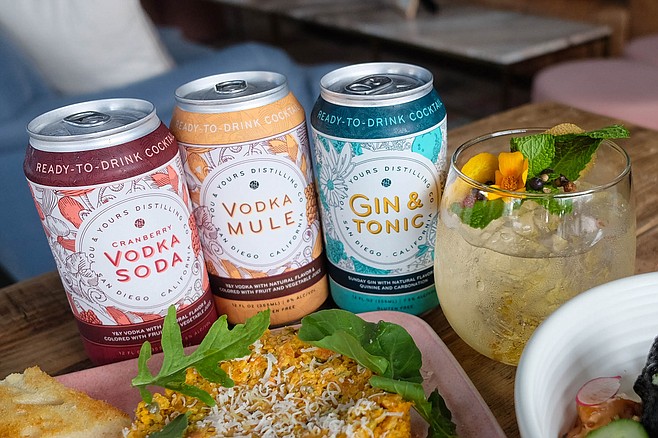 From the moment Laura Johnson first opened You & Yours Distilling Co. two years ago, it gave East Village a craft spirit tasting room and lounge photogenic enough to lure influencers and attract national media coverage. But the urban distillery lacked one thing that capped its potential as a drinking destination: ironically, that one thing was food.

You & Yours Distilling Co.

Thanks to a restrictive California law, distilleries that don’t serve food may only serve a customer 1.5 ounces of spirit per day. While traditional bars may serve multiple rounds without offering so much as a single French fry, this rule forced You & Yours to limit guests to a single cocktail. Given that drinking establishments have been known to struggle without such prohibitions, observers were forced to wonder (okay, it was me, I wondered) whether You & Yours could sustain itself only serving one drink at a time.

When I reflected on my initial concerns to Johnson this week, she chuckled. “A kitchen was always in the works,” she said, “we just didn’t have the space or capital in the very beginning.”

But she did have a business degree and a distiller’s patience. Johnson and her team have steadily worked to open markets for You & Yours bottled spirits throughout the state. The brand particularly gained steam last October, when it introduced a range of canned cocktails. Initial offerings included established favorites from the tasting room: gin and tonic featuring You & Yours Sunday Gin with grapefruit and lime scented tonic water, and a vodka mule made with peach bitters rather than the traditional angostura.

Canned cocktails — what the industry calls ready-to-drink cocktails — have thrived overseas in recent years, and industry watchers (not me this time) project rapid growth as more products debut in the United States. Case in point: Miramar’s Cutwater Spirits spent the past two years heavily pushing its canned cocktail line, likely contributing to its status as the first spirit producer purchased by the world’s largest beer company, AB InBev, back in February.

While You & Yours is poised to capitalize on this projected growth, Johnson had another perspective in mind when she included ready to drink cocktails in her business plan. “We’re more looking at the canned cocktails as a tool to sell our spirits,” she explained, “It’s a lot easier for a consumer to take a chance on a 15 dollar four-pack of canned cocktails than it is a 30 dollar bottle of gin.”

And not just retail customers. You & Yours recently placed its canned cocktails in Whole Foods locations, and will expand all of its Southern California stores by the end of June. The early response has already prompted the chain to add You & Yours bottles to its inventory.

With its wholesale market now established, Johnson secured a second East Village location to increase canning capacity and storage, freeing up space behind its distillery to add that kitchen. The tasting room is now equipped to serve a menu of small and sharable plates, stuff like salmon poke or fried chicken, along with recommended cocktail pairings. A new patio will allow drinkers and diners to find additional seating outside.

With the infrastructure upgrades complete, Johnson may now return her focus to developing new products. She expects to introduce the first You & Yours apertivo by early winter, and has five new canned cocktails in the works.