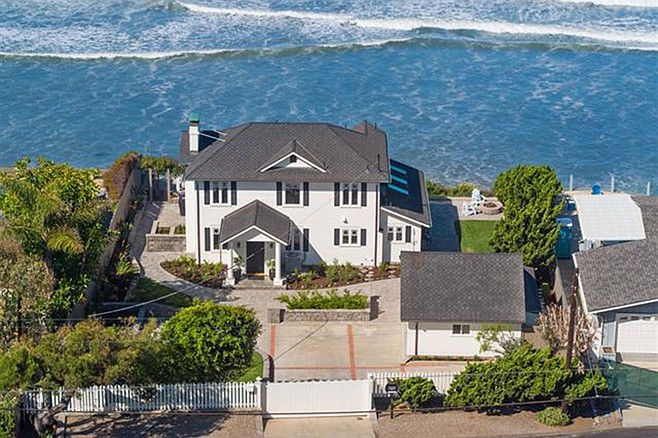 The “iconic waterfront masterpiece” at 1448 Neptune Avenue in Encinitas was reportedly just the second or third blufftop mansion constructed in the area, and after nearly 100 years, is the oldest one still standing.

Built in 1925 or 1928 (depending on whether you trust county tax records or previous reporting), the white Cape Cod-style home includes three bedrooms, two baths, and nearly 2500 square feet of living area on a third-acre lot between the Catamarans and Avocado Street surf breaks.

Local legend has it that the home was at one time owned by silent film star Charlie Chaplin: according to various tales, it was purchased either as a residence for his mother Hannah or as a place to hide his pregnant 16-year-old mistress Lita, whom he married in Mexico and with whom he fathered two children (she claims to have been living in Beverly Hills at the time). It’s also possible the residence was purchased by Charlie’s half-brother Sydney, who owned a handful of other Encinitas properties around this time. 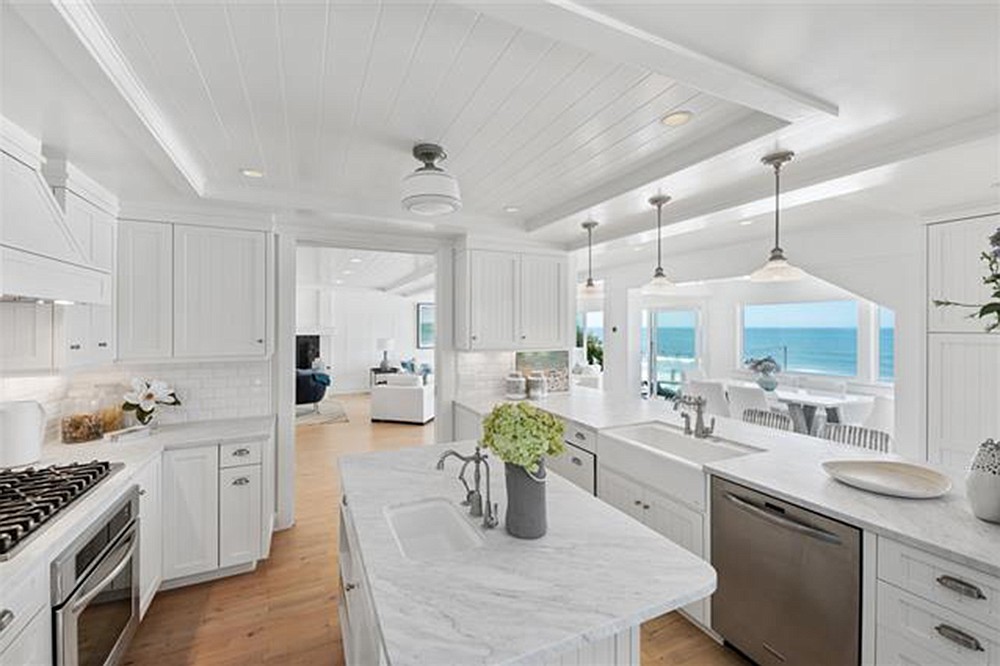 For decades, the home has been owned by the Bixby-Kibbee family. The Bixbys first came to California during the Gold Rush (coincidentally, the name of the film on which Chaplin was working when his affair began with Lita), forming the Bixby Land Company, which currently owns or manages several million square feet of commercial property from a Newport Beach headquarters. In 2010, Melissa Kibbee, the then-25-year-old daughter of Sarah Bixby Kibbee and David Kibbee and an aspiring decorator, oversaw a complete renovation of the classic estate, “using original materials wherever possible, and tasteful upgrades when appropriate,” per the listing.

In keeping with the historic context of the home, Kibbee retained the “unique Georgian front door with knocker,” and the “original v-joint wood ceilings” in the living room, kitchen, and master bedroom. The living room, outfitted with an “oversized fireplace and sound system,” retains its original wood wall paneling but has received a fresh coat of paint.

The original windows and glass work remain on the front of the house and on the interior, but those facing the ocean have been upgraded to newer multi-pane affairs to better protect against the elements.

The kitchen has been modernized with Carrera marble countertops, a retro farmhouse sink, gas appliances, and a center island with prep area and sink. Both bathrooms have also received attention, and all areas outside the bedrooms have been fitted with upscale stone and wood flooring. All three bedrooms, including the second floor master, “are punctuated by captivating Pacific views.”

Outside, a “large, flat grassy front yard” gives way to “immaculate tropical landscaping” and two levels of view decks behind the house, including a gas fire pit, where one can “watch the surf break down the entire coast down all the way from La Jolla to San Onofre,” or “boats, pelicans, whales, dolphins, local osprey and surfers below.”

A private, motion-sensor lighted staircase leads down to the beach below (a feature no longer allowed in new construction per California Coastal Commission rules), with a locking entry gate and several retaining walls to protect the home above.

The property also includes a “detached artist’s studio/office with large glass doors that open to an ocean view” and a two-car garage, plus gated parking for four more vehicles. An outdoor shower includes “separate overhead and foot shower heads and surf rack.”

The Neptune residence, which has never been publicly offered for sale in the 25+ years local multiple listing service records have been available online, was first listed in mid-April for $9,995,000, a price that remains unchanged to date.