Jane Austen and the eighties

Frenzy and anger are tens on a scale of one to ten, and tens are unsustainable. 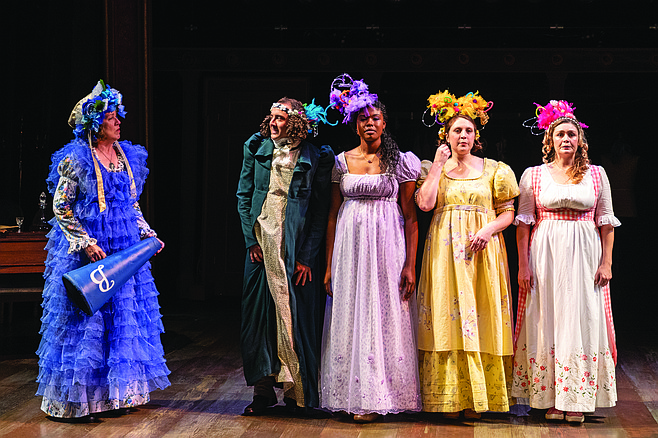 This odd mash-up of Jane Austen, eighties dance numbers, and broad farce works. The script adheres closely to the book’s plot and uses a lot of Austen’s language — a smart choice by playwright Kate Hamill, as Austen’s famous one-liners get the most laughs.

Hamill adds a “get a man” drill-team routine led by Mrs. Bennett, armed with a bullhorn, and sung to the tune of “Hey, Mickey”— hilarious the first time. Not so much the second. But the intermittent intrusion of eighties music is great fun and doesn’t get old.

Some things do get old: frenzy and anger are tens on a scale of one to ten, and tens are unsustainable over time. That’s why tragedy has comic relief, and why comedy offers quiet, reflective moments. Give the audience a few more emotional breaks.

Some of the writing is juvenile. One double-entendre about “loving balls” is funny. The second and third aren’t. The re-using of gags is this production’s weakness.

The set is puzzling. It seems to be a prop room, but there is no play within a play, so it makes no sense. Props are plucked from its industrial shelves, so it functions but doesn’t add anything.

There is much to love here: six actors play 18 gender-blind roles. Many of the character/costume changes are at lightning speed, and as the play progresses, they often take place right on stage, to great comic effect. The intricate and well executed blocking require high levels of acting and directing skill.

Jacque Wilke is a compelling Lizzie. Her facial expressions speak volumes. If she modulated her intensity a bit more, it would give more punch to her “ten” scenes.

Kevin Hafo-Koppman’s frequent, rapid character changes and physical comedy electrified the audience. I suggest he also modulate his intensity. He reaches a peak in the audience-interaction moment, the biggest laugh of the production. What if you didn’t try to go up from there, but went down for extended periods? It might give more punch to later moments.

Joy Yvonne Jones plays Jane with suitable radiance and reserve. Steve Lone gets Darcy just right: dignified, arch, and starchy. Jake Millgard makes an oily-enough Wickham. But he overplays Collins by a mile. Yelling can be funny. Yelling a single word in every sentence is not funny. Shana Wride’s Mrs. Bennet is over-the-top farce. Michelle Marie Trester makes a believable and endearing Lydia. But her ponderous Lady Catherine left little room for Lizzie’s disdain by being more laughable than anything else.

After sitting thru this nauseating experience with my partner I have realized that the overall quality of theatre in this town has hit its bottom. Every critical praise and standing ovations for productions that are unworthy of merit has trained audiences to give needless ovations. This theatre was once a very good theatre with work above par. I suggest this new director Lefty should read the material before assembling his squad.