Signs: at the Encinitas Pannikin; the 1889 National Hobo Convention in Saint Louis; the corner of 26th and Pershing; and the 125/94 interchange

“Success is not final, failure is not fatal. It is the courage to continue that counts.” 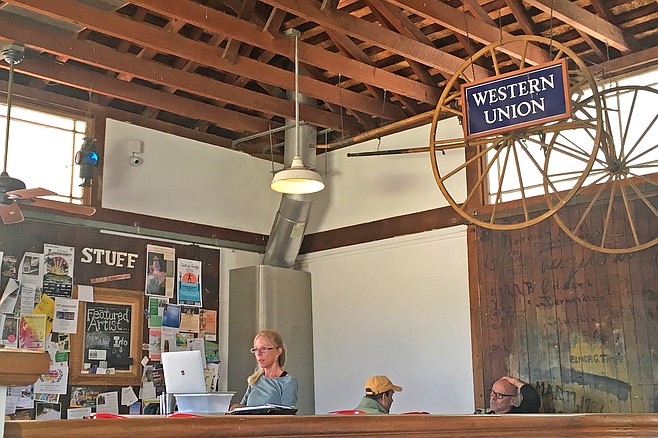 The croissants at the Encinitas Pannikin are as big as my head, and they aren’t even close to the most gorgeously decad ent baked goodies on display in the glass cases that greet visitors to this lemon yellow converted 19th-century train station. The sun shines, the ocean breeze blows, the flowers sway, and just like that, the old stupid thought returns: I’d be happier if I could afford to live here, by the beach, and eat croissants as big as my head on the regular.

Outside the café’s front door, among the usual collection of free local papers and ads for tourist attractions, there’s a stack of index cards featuring handwritten haiku from Dylan Barmmer, creator of Random Acts of Poetry. He performs on YouTube, posts on Instagram, etc., but I’m most impressed by the stack of cards, just left here for the finding/reading/taking. The poems have titles such as “Today,” “Still,” “Spark,” “Life,” “Strong,” “Presence,” “Feel,” and oh yes, “Rich.” The money we make/ Can’t buy us true happiness/ But love shines like gold. Prosaic as all get out. And yet. I’d be happier if I could afford to live here…

Inside the café, there’s a big community bulletin board, helpfully labeled Stuff. Let’s take a closer look at what’s being offered. Sage Dakota is a Licensed Marriage and Family Therapist offering “Past life regressions and soul retrieval to help you understand why a current or past relationship was/is difficult, what connections you’ve shared with another, and whether or not your significant other was/is your Twin Flame.”

“Are you ‘Sick and Tired’ about being ‘Sick and Tired?’” asks one postcard. Nurse Practitioner and Energy Medicine Specialist Dr. Dolores Fazzino, DNP wants to “help people heal at the mental, emotional, and spiritual level, eliminating chronic and acute illnesses from occurring or continuing.” So she’s offering a five-night retreat in Mount Shasta called 5 Pillars of Extreme Self Care that includes accommodations, a sacred site outing, deep meditation healing, a fire release ceremony, sound healing, and daily yoga,” so that attendees may “learn practical and simple tools to communicate with your Inner Physician.” General Admission is $1997; VIP is $2479.

Joy Healing’s Lauren Joy Jeffers is one of the over 130,000 practitioners of the Healing Touch Program (Leaders in Energy Medicine) “because everyone deserves to be happy!” The Program is “a heart-centered and intentional energy therapy that uses the hands” to release stress, “facilitating healing on many levels,” including the “physical, mental, and emotional.”

And even if you’re feeling okay, you know, mentally and spiritually, you still have to deal with Brother Ass. The Liver Flush promises to “awaken your body to spring.” Anna Leah Mintz wants to help you to be able to order Premier Research Lab products directly, instead of through a health care provider. Daniel Gilbert is a devotee of Ida Rolf’s Structural Integration, “a kind of holistic physical therapy” which touts spontaneous healing through the unimpeded flow of gravity.

Still, it’s a lovely place to visit, maybe buy a croissant now and then. 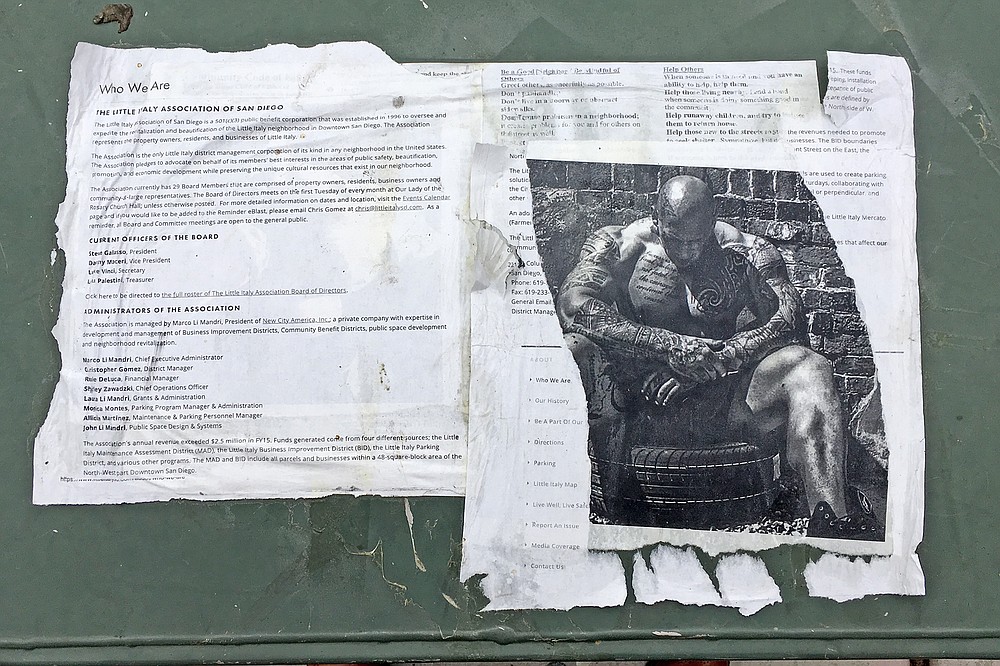 There’s a strange sort of pasted paper battle being fought on the utility box on Union Street between Cedar and Date. First, some enterprising soul slapped down a glitchy two-page Xerox of the Hobo Code of Ethics, as agreed upon at the 1889 National Hobo Convention in Saint Louis. Why exactly is not clear. Reading the tenets — “Do not allow yourself to become a stupid drunk,” “Always respect nature; do not leave garbage where you are jungling,” “Always try to find work,” etc. — it’s possible to imagine that the paster was sending a message to the local homeless population. But of course, people who call themselves hoboes would call the non-working homeless either tramps (if they were transients) or bums (if they sheltered in place), and would never expect such folk to adhere to the Hobo Code.

Over this, some proponent of effort and discipline has stuck two images of hulking musclemen. On the bulging right pectoral of one is an elegantly scripted tattoo of a quote commonly attributed, as so many are, to Winston Churchill: “Success is not final, failure is not fatal. It is the courage to continue that counts.” QuoteInvestigator.com says the line’s most likely source is an Anheuser-Busch ad. Seems right.

And over that, some more civic-minded person has pasted a printout of the Who We Are section of the Little Italy Association website. “The Association represents the property owners, residents, and businesses of Little italy,” and pledges “to advocate on behalf of its members’ best interests in the areas of public safety, beautification, promotion, and public development…” The struggle is not only real, it’s weird. Rain or shine, the pasted pages endure, wrinkling and melding under the San Diego showers and sun.

At the corner of 26th and Pershing, an empty flagpole and a framed sign mark the grove of 66 California Live Oaks that serve to honor the men who died on the USS Bennington in 1905 when a steam boiler exploded on board two days after she docked in San Diego. The sign is credited to the Daughters of the American Revolution, the Friends of Balboa Park, and Eagle Scout Andrew Rosener. The Live Oaks are in rough shape; in some cases, “live” seems generous. The sign looks pretty good though, perhaps because of the notice posted on one side, beneath a sheet of cracked Plexiglass: “Attention Graffiti Artists: We would appreciate your reverence to those who have sacrificed their lives for our Freedom. Some have displayed their artwork that covers the real meaning of this Memorial. Others have taken rocks and smashed the covering. By smashing the Plexiglass you are defacing this Memorial and the memory of All those who serve in Our Armed Forces.” 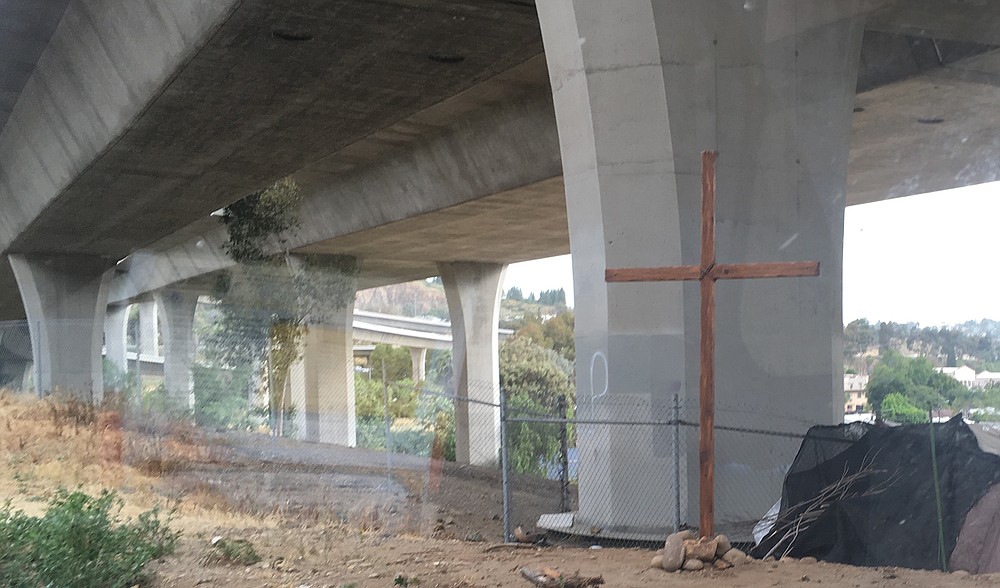 Someone has erected a cross beneath the 125/94 interchange; maybe it’s the person living in the tent nearby. It’s not as visible as the cross atop Mount Helix, but it may be easier to actually see.