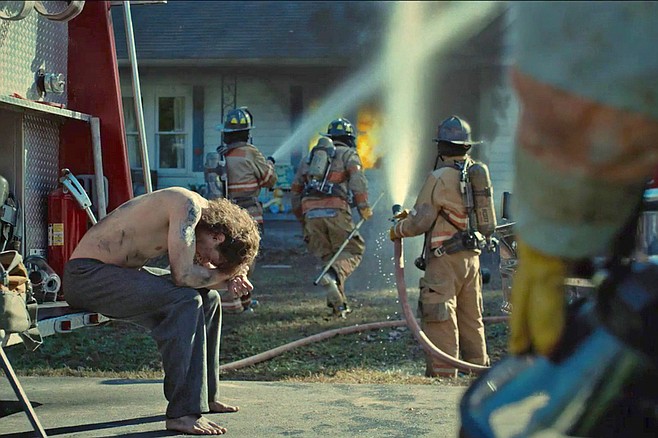 Several anti-death penalty features were fated to follow in the wake of Dead Man Standing (most notably The Green Mile), but in most instances, stories of wrongfully-accused lifers punching the clock on death row are the talk of voice-activated Smart TVs. No stranger to television and movies, Emmy and Oscar-award winning director Ed Zwick straddles the fence by paying passing homage to both mediums. It’s only in terms of performance that Trial By Fire ignites the screen.

We open in mid-blaze, with Cameron Todd Willingham (Jack O’Connell) — or Todd as he’s called by those closest to him — inside the smouldering home, unable, for reasons that will later become clear, to deliver his three babies from extinction. Fearing that his cherry Camaro could be turned to kindling — or did he sense a bigger blast if the flames were to reach the gas tank? — Todd stumbles from the burning house to push the car to safety. According to the appalled lady across the street, this decisively oddball move proved her neighbor guilty of placing the well being of his car before the lives of his children.

“Fire talks to you, it doesn’t lie,” asserts one crime scene detective, only to later top that rubric with this sagacious chunk of forensicality: “Fire doesn’t destroy evidence, it creates it.” Someone in the department deserved to be fired, what with all the errors of detection initially afforded the investigation. Inside the scorched wreckage, a refrigerator blocks the kitchen door, as if knowingly and willfully placed there to block the exit. The floor of the bedroom in which detectives find the charred remains of three young girls indicates gasoline poured in the shape of a pentagram. In the days before the internet gave individuals their daily spew, America thrived on trial-by-talk-radio. In no time, the airwaves pulse with caller’s thoughts on ritualistic slaughter.

Then there are the false flashbacks, those moments planted by the filmmakers to raise initial doubt in the viewer’s mind as to whether or not Todd deserves the jailhouse sobriquet of Baby-Killer. Was he honestly capable of tossing a lit cigarette on the gasoline-soaked carpet? And what’s with the Rambo-esque war paint, streaks down the cheeks drawn from the ashes of tragedy? Reality goes like this: when the cops know Todd’s name before running his license, it’s a cinch that the drive home from his children’s funerals wasn’t being interrupted for a routine traffic stop. Removed from his car, the grieving father is cuffed and placed under arrest for triple-homicide.

With David Grann’s New Yorker article to guide them, Zwick and screenwriter Geoffrey Fletcher work quickly to whittle away at what could have amounted to lengthy courtroom proceedings. Stacy Willingham (Emily Meade) testifies that whatever beatings she took off her estranged husband were countered with an equal number of bruises given. She’s quick to shoot down any accusations of forced attempts on Todd’s part to terminate a pregnancy. If anything, Stacy finds her husband guilty of fear, not filicide. I believe every word of Emily Meade’s bullshit-free performance. There’s an authenticity in her, such that Stacy can’t help but hammer home Todd’s innocence. Where was she when they were passing out awards to supporting players?

Enter Elizabeth Gilbert (Laura Dern), a writer and teacher who, seven years into Todd’s incarceration, happens upon his case when stopping to help a stranger fix a flat. Gilbert (not the author of Eat Pray Love) views the death penalty as a form of legalized revenge and begins to champion Todd’s case. How creepy must it be for her children to learn that their single mother has a jailhouse boytoy? (Her ailing ex-husband clings to life just long enough to appear in a couple of scenes before checking out.) A born charmer, Todd flirts up a storm, causing friends of the smitten Gilbert to joke about her “death row romance.”

Just because life offers up cliches doesn’t mean a director has to play them as such. The traditional thawing of the glacial prison guard (Chris Coy) comes with no surprise or derivation. With plenty of time on his hands and Gilbert’s penpal confessional to contemplate, Todd takes a turn toward the delusional. Not only does he dream of standing in Gilbert’s kitchen, watching as she reads his letters, Todd imagines his oldest daughter spending quality jail time in dad’s cell with him. It was at about this moment that my interest began to severly wane.

For Gilbert, it was never about guilt or innocence. All she ever wanted was a fair trial. Earlier, I made mention of slighting Meade in last year’s awards derby. Laura Dern’s probably been robbed of more awards than Meade’s given performances. We always hear talk of not enough quality parts out there for women. O’Connell is fine in his role as the wronged man, but it’s the women who carry the picture. With that in mind, fans of the genre and detailed performances alike could do worse.

Dern's whole family deserved a slew of awards. Bruce Dern and Diane Ladd have had choice moments over the years... which movies of Bruce and Diane would you recommend?

I was introduced to Ladd in back-to-back performances as Ida Sessions in "Chinatown" and Flo in Marty's "Alice." Loved her in "Wild at Heart" and a small picture that no one has seen, "All Night Long." Hey! There's also the brilliant "The Game with Glass Pieces" y'know? Look it up! "Cycle Savages" dared to cast Dern and Casey Kasem as brothers. It doesn't get much better than that. But seriously, "The Driver," "Black Sunday," and "Smile" are my go-to Derns.