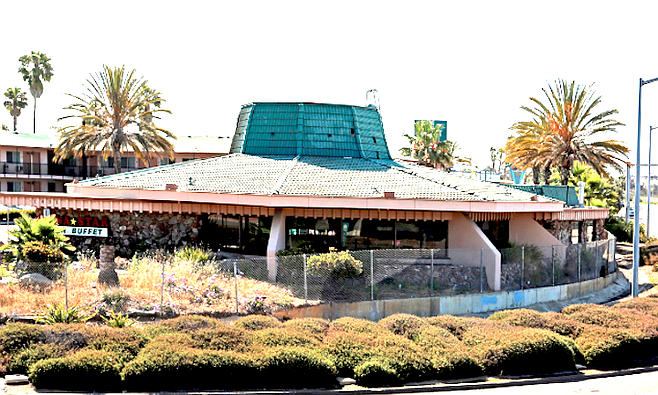 Q: What do you do if you want to open an adult business where it’s not permitted?

A: If you’re Larry Flynt’s attorney you simply proclaim you are not an adult business and hope no one notices.

“They are saying they aren’t an adult store? That’s great! I can see it now: Come and get your sex toys for the entire family,” jokes Drew Andrioff, a local businessman who comments frequently on Oceanside social media. 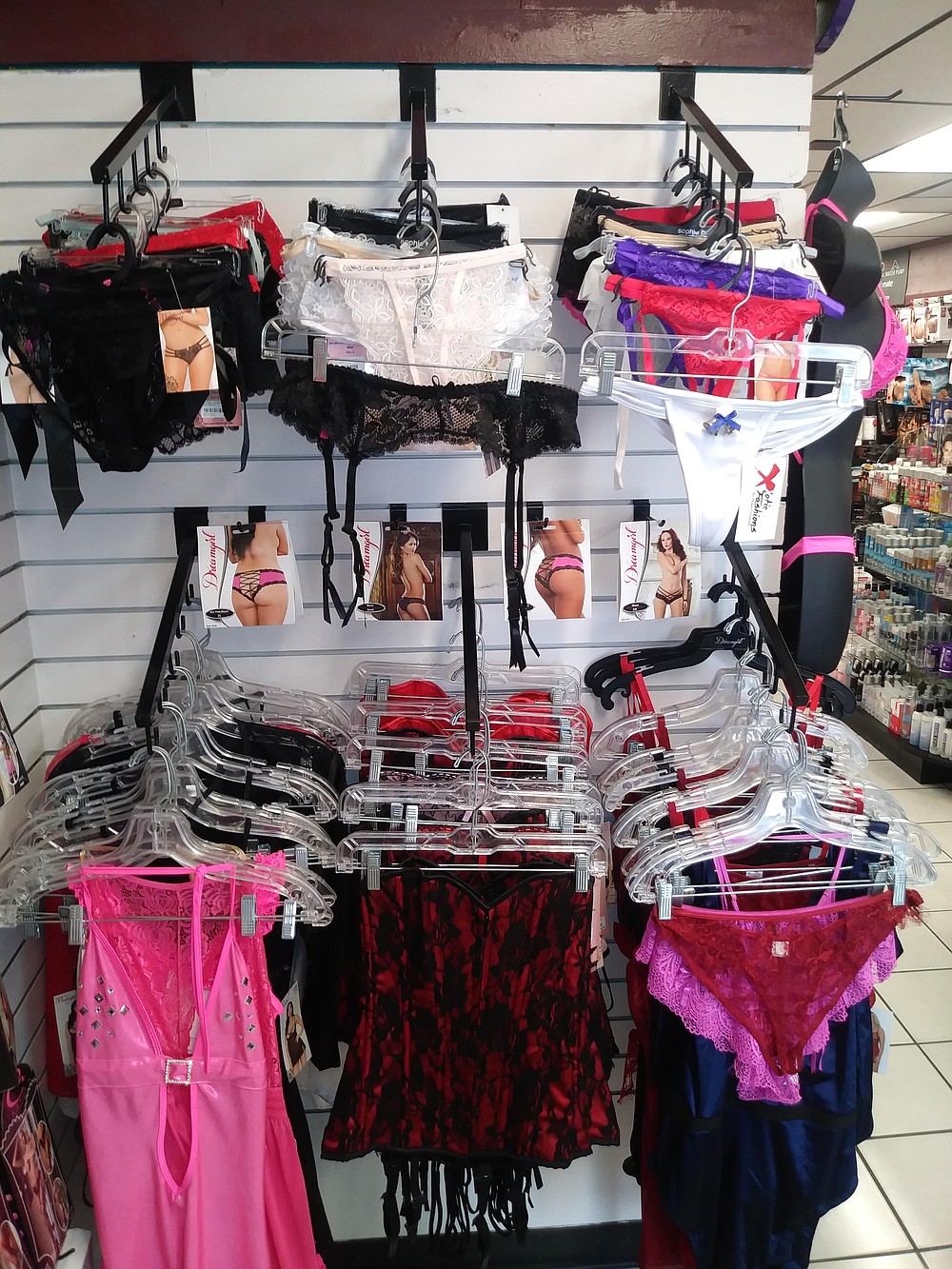 The fact is on May 1, representatives from Larry Flynt Productions had a meeting with Oceanside officials about opening a Hollywood Hustler outlet in Oceanside. The other local Hollywood Hustler is in the Gaslamp at 929 Sixth Avenue. Now the Los Angeles-based company is hoping to open its second store in the county at a long vacant storefront in Oceanside at the intersection of I-5 and Mission Avenue.

Larry Flynt Productions drew up plans for a Hollywood Hustler at 1401 Mission Avenue in a circular building that is visible from I-5. For many years it was home to a coffee shop and most recently housed the China Star Buffet. It has been vacant for over four years.

One big problem for many local business owners concerned with Oceanside’s image is that the store would be located in such a prominent location, and that it would not help Oceanside shed its once gritty image. “We just got rid of the Main Attraction, and now we don’t want to replaced it with something worse,” says Linda Pina, co-owner of Eat Like a Local which hosts walking food tours promoting Oceanside cafes. “We’re trying to clean that area up.”

After more than 30 years on Coast Highway, the only topless bar in North County known as The Main Attraction is set be demolished to make way for a new residential/commercial development. There are no announced plans to reopen the Main Attraction anywhere else in Oceanside.

The Hollywood Hustler in San Diego sells sex toys, lingerie, lubricants as well as X-rated DVDs and magazines. Zoning laws in Oceanside and most cities would classify this as an adult-oriented business which would mean it would be a treated as a regulated business which needs special review and approvals. It would appear that opening a Hollywood Hustler in that proposed Mission Avenue location may be prohibited because of its closeness to Oceanside High and to another regulated business, the Ocean’s Eleven Casino.

The firm Lipsitz Green Scime Cambria represents Larry Flynt Productions. A letter from attorney Alex Basinski from that firm to the city of Oceanside said that “…We believe that our proposed use constitutes a general merchandise or variety store and should not be classified as an ‘Adult Business’…”

Employees at the San Diego Hollywood Hustler store referred all questions about current and future store operations to regional manager Jennifer Bonwell, who declined comment and said that all questions would need to be answered by the Flynt corporate office in Los Angeles. A call to those offices directed me to a Linda Goen who did not return phone calls.

Jack Feller has been an Oceanside City Councilman since 2000. He says he has no concerns about a Hollywood Hustler arriving at that location since he sees no way they can avoid being deemed as an adult business. He says since it was learned Main Attraction was leaving, “I thought we were heading down a different path. I was on the council when we paid $750,000 to get the [all-naked strip club] Playgirl to leave downtown.”

But Feller admits that a similar business to Hollywood Hustler called Romantix in downtown Oceanside on Pier View Way, is not a public nuisance. “I have not heard of any problems there.”

Rick Wright is the executive director of the business support group Mainstreet Oceanside which runs the family-oriented Sunset Market every Thursday evening in the streets of downtown Oceanside. That market has booths directly in front of Romantix. He says he appreciates that Romantix goes out of its way to maintain an understated facade. “That store is completely off the radar. I have heard of no issues…I believe we can peacefully co-exist.”

Which makes one wonder if the demand for a new adult-oriented brick-and-mortar is even worth it for Larry Flynt Productions.

An employee named Tony who works at Romantix admits business has slowed down since the nearby Firewater Saloon was shuttered in September by California’s Alcohol Beverage Control, but he says it is still profitable. He said the business, formerly known as The Fun House and Midnight Adult Books, started flying under the radar when it changed its name to Romantix and ripped out the back-room video booths that played porn segments at 25-cents a pop. “The city made us take them out,” he says. Video rentals and sales are now, “…just ten per cent of our sales, if that,” says Tony.

Once the Main Attraction goes away, and if Hustler Hollywood does not open, Romantix will be Oceanside’s only adult-oriented storefront. There are none in adjacent Carlsbad and the Déjà Vu Love Boutique is the only one in Vista. Longtime locals will recall the Coronet News Stand on Coast Highway that maintained its adult magazine section for decades until it closed in 2003. Oceanside’s Sinsation store (similar to Romantix) has long since closed.

“If they opened [Hollywood Hustler on Mission Avenue] it would probably be the brunt of a lot of jokes,” says Shay Cooper, co-owner of the newly opened Steel Mill Coffee in downtown Oceanside. “But at the end of the day, I can’t say if I would be for or against it.”

City planning staff did not comment on what happened at their May 1 meeting with Larry Flynt Productions.

Where is all the outrage over the massage "spas". We all know what really goes on in there (I heard it from a friend)

little left to the imagination judging by the ads they run

That building is a specimen of several such structures built around the county in the early 70's. All were on the same lot as a Big Bear supermarket, and were built and owned by John Mabee who founded and operated the Big Bear stores. He was, the story went, concerned that folks were buying less at supermarkets, and were eating out more. So he opened those octagonal restaurants under the name Daisy's (as I recall) to tap that market. His operatives actually had a decent restaurant going, but over the years they just didn't pay off, and gradually they sold or leased them to other operations. When built, they were very nicely equipped, and had ample floor space. What has happened to them, I don't know. Those that I remember were in south Chula Vista, Clairemont, Vista (on East Vista Way), and this one in Oceanside. Well, I do know that the Chinese buffet in the Vista location closed about a year ago, and it is also now vacant. Unless one is extensively remodeled, it has a distinctive look, partly due to the eight-sided plan.

Does the name of that law firm make you wonder? It does me. It's almost like a joke or parody, and maybe it gets noticed. But how it can claim that a store like that isn't an adult business is a mystery to me. Today I'd think it is too easy to buy those lines of merchandise online, and avoid the trip to the tawdry store.

Pretty sure the Stag & Lion (formerly Hensley's) in Carlsbad at Tamarack and the 5 is also one of those.

Exactly. That same setup is out on Jackson Drive @ Navajo Rd. That building is some sort of fitness club now, but years ago, and for years it was a restaurant. It was in the same lot as the Big Bear grocery store. Brings back memories.

Duh, when I was trying to recall those Daisy's locations I could not remember the one closest to where I lived, the one at Navajo and Jackson. Oddly, I don't think I ever ate there; I did have lunch at the one in Clairemont a few times, and also tried the one in CV. Mabee was an astute businessman, but as a restauranteur he flopped. Maybe (pardon the pun) he was ahead of his time.

Isn't it interesting to see how "creative reuse" can keep those older buildings going?

There is/was one on El Cajon Blvd. between College and Montezuma.

That’s right Daisy’s and later Jimmy’s. Never ate there either, but you jogged a memory. https://www.sandiegoreader.com/news/2...

It sounds like Larry Flynt Productions tries to place their non-adult adult businesses in cities where they view the City Council folks as country rubes. If they win and are able to locate their store in Oceanside then it will be proof that the City Council are idiots.

The City of Oceanside counsel IDIOTS will approve it. Anything for money!!!! They approved short term rentals at a three bedroom single family home right next door to our home of 30 years a few years back. I called Code Compliance NUMERIOUS times when the Plumber working on the place told me they were converting the home to separate living units. CITY DID NOTHING!!!!! Its located in the tri-city area but the Owner advertises it as just a stones throw from the beach - Only 15 minutes by car..What a joke the City of Oceanside is! Its been hell with the noise and parking ever since.
Shame on them!

KenL I sure hope I'm incorrect, but they do like the revenue no matter who's toes they step on. In my case I really blame Code Compliance for looking the other way when the issues were pointed out to them and they had the opportunity to stop it. Maybe they will approve the X Rated store at my other next door neighbors home. Who knows with this City.