Major mead momentum for Lost Cause 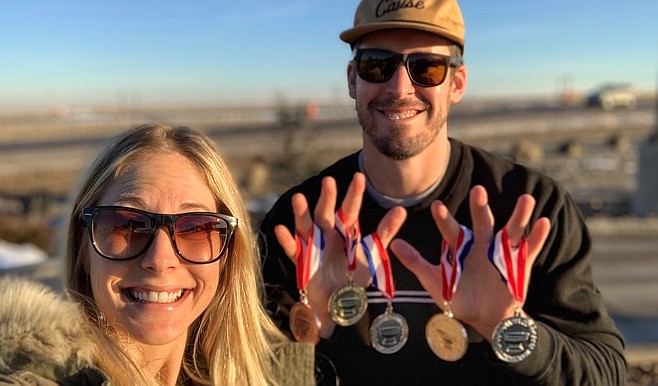 Launched in November 2017, Lost Cause Meadery has quickly established itself as one of San Diego’s top mead makers. According to the results of this year’s Mazer Cup International Mead Competition, it also ranks among the best in the world.

Married Lost Cause co-founders Suzanna and Billy Beltz returned from the annual Colorado contest with five of the 69 medals awarded: a gold, three silver, and one bronze. Only one other meadery equaled the five-medal count.

The haul lends an air of legitimacy to a craft beverage still standing in the shadow of San Diego beer. However, these awards merely punctuate a year of successful growth for Lost Cause. According to Billy Beltz, tasting room sales are up 80 percent in the first quarter of 2019, compared to the same time frame a year ago.

Much of that is positive word of mouth spreading among local beer enthusiasts, but there’s a burgeoning national recognition as well. “We’re getting a lot of people from around the country,” Beltz adds, such as a recent guest from Michigan who showed up to buy a case of mead at the behest of a bottle share group back home.

That can be a significant investment. Mead costs more to produce than beer, and single Lost Cause bottles range in price from 17 to 34 dollars. The Beltzes had always hoped an audience of beer drinkers would embrace the premium beverage, and launched the business with dry, sparkling, core offerings they presumed would appeal to local craft fans.

However, most of the meadery’s recent growth may be credited to surprising styles. It turns out, “A lot of people like the bolder, sweeter, still meads,” reports Beltz. A particularly big hit for Lost Cause has been a style of mead called a bochet. It’s made from caramelized honey, which yields a richer, more potent beverage. Beltz likens the appeal of bochets to that of pastry stouts, a massively trending beer style that dresses a big, roasty stout with rich and sweet flavors such as chocolate, maple, and/or coconut. A blueberry, cinnamon, and vanilla bochet, Blåsväder, earned Lost Cause one of its silver medals.

The bochet’s success led Lost Cause to the same realization many local beer makers have faced in recent years. “What people want,” says Beltz, “is something new.” Thus, Lost Cause has shifted its focus to produce more limited, small batches, including barrel aged meads and those made with specially sourced honey. ITo wit, its gold medal came from a collaboration with local hombrew guru Brian Trout, made from pink peppercorn blossom honey sourced from Brazil.

Such small and barrel aged batches will provide a focus for Lost Cause’s next stage of growth: a new meadery. The Beltzes recently secured a production space in the Morena District, and while Lost Cause will continue to operate a tasting room in the Miralani Makers District space it shares with Serpentine Cider, it will move production to the larger property this fall, where it will have room to stage more mead education events.

Beltz sees local mead as being roughly where local beer stood in the 90s, when drinkers stopped viewing hops as too bitter, and started appreciating the nuanced flavors they provide. With mead, he says, local palates are coming around to distinguish the characteristic sweetness of differing honey varietals in much the same way. Rather than chalk mead up as “too sweet,” we’re learning to swirl it in the glass, enjoy its floral aromatics,

It bodes well for the future of mead in San Diego, which is looking bright. A couple of local meadmakers also brought home medals form the Mazer Cup have their own professional aspirations. Gold medalists Jared Ayo and Sean Callahan are in the early stages of planning The Swarm Meadery, while silver medalist Eric Olson and his wife Anya Gonzalez eventually plan to open Mjødhall Meadery.