How does one go through life with a gun secured inside the belt and neatly tucked under the back pleat of a sport coat? 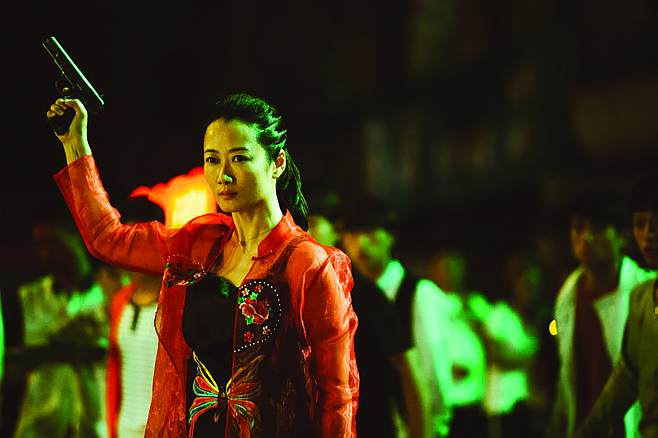 Bin (Fan Liao) cradled Qiao’s (Tao Zhao) left palm in his, certain it was the same hand she used to squeeze off the shot that saved his life. Some romantic is he. The poor dumb slug doesn’t even remember she’s a rightie. It’s moments of realization and little acts of betrayal like this that will keep Ash is Purest White burning in one’s memory for some time to come.

Qiao pulses through the arteries of a bustling underworld mahjong parlor with an air of superiority that only a mobster’s prize skirt can secure. Positioned in a small mining town, the club is Hong Kong’s cut-rate answer to Vegas’ tacky Circus Circus; a carnival performer twirling in circles, bicycle clutched firmly in his teeth, greet guests bound for the casino. Reaching her destination, Qiao pulls a chair up next to Bin’s, pinches two fingers around the butt dangling from his lips, and confidently proceeds to take a couple of pulls. A fight breaks out, a gun is brandished, and Bin, acting as umpire, calms the two irate players. Fondling the gun, it’s easy to see why a dame like Qioa would gamble her affection on a player like Bin.

No sooner is a local builder stabbed to death in a parking lot than Bin gets a lead pipe to the shin. For a moment, the action appears to be heading in the direction of a gang war between young turks and the made men they target, but Bin is so taken by his twin assailant’s actions — they both claim to have mistakenly hit the wrong hood — that he puts them on the payroll.

After the fifth mention of “jianghu,” the pause button was hit so that I might perform a quick mid-show Google search. In its most simplistic form, the term refers to mobsters, a brotherhood of insiders akin to America’s mafia. But its meaning goes much deeper than that. “Those living in the jianghu followed their own moral code,” the Daoist Gate (I subscribe) reports, “which they viewed as superior to laws mandated by the government, which many saw as corrupt and incompetent.” It’s macho maxims like this that will forever keep our lovers apart.

Writer-director Zhangke Jia has a blast rattling genre conventions. It’s a known fact that gangsters (and the plainclothes bulls who pursue them) instruct their clothiers to tailor waistbands that double as holsters. How does one go through life with a gun secured inside the belt and neatly tucked under the back pleat of a sport coat? Doesn’t it ever come loose? It does: when Bin takes to a nightclub dance floor and spasmodically shakes his hooves to the disco beat of the Village People. In less capable hands, the gun would have discharged the moment the weapon hit the ground, killing three patrons with one bullet.

Then there’s what I like to call the Billy Jack Deli Counter Brawl. Instead of playing dogpile on Billy’s ass, twenty assailants take a number and wait their turn. A confrontation between Bin and a motorcycle gang commences with a similar line of assaulters. It lasts just long enough for another tried and true cliche to be trotted out — firing a pistol in mid-air as a means of gaining a violent mob’s attention. The difference being that this time, a right-handed woman is doing the shooting. It’s Qiao who stands them down, effectively calling for a temporary drought on bloody hood ornaments.

Qiao is, and will remain, a woman in control, even after serving a 5 year stretch for possession of an illegal firearm. (The gun belonged to Bin.) According to Qiao, “Anything that burns at a high temperature is made pure.” Sprung from prison, a boat trip up the Yangtze in search of romance past finds Qiao hotter than a carbon arc. Not only is she robbed by a mild-mannered grifter posing as her cabin-mate, upon reaching her destination, she’s told by Bin’s current love interest to take a hike. Missing their old life together, Qiao looks to the jianghu as a means of salvation.

Not every cobblestone along her white-hot path to endurance affords firm-footing. A cyclist offers Qiao a lift and later propositions her. Stealing his bike, Qiao heads straight to the nearest cop house and cries rape, knowing full-well that Bin will be called upon to pay her bail. The same goes for Qiao’s ridiculous attempts to make cash off of unwitting wedding guests by passing herself off as the sister of their suddenly pregnant mistress. Desperate times calling for desperate measures is an adage best applied to characters, not screenwriters.

For those who regularly use lack of strong female characters as an excuse to avoid going out to the movies, it’s time to get out of the house. In a performance that spans nearly two decades, Tao Zhao will leave you breathless. Spencer Tracy had an aversion to the makeup chair. (“I can’t act with stuff all over me,” Tracy told Laurence Olivier.) According to biographer Garson Kanin, Tracy’s “characters had to be created from within rather than with artifice.” The same goes for Zhao, who acts her age at every step of the way, and does so with very little in the way of Max Factor waning.

Looking over the director’s filmography leaves me red in the face. With twenty features to his credit, I’m ashamed to admit this is only the second one to catch my gaze. (24 City passed through town in September of 2009.) If it’s not too late, allow me to append this year’s list of New Year’s resolutions to include a mini-retrospective of Zhangke’s work.