“As usual, eyes were bigger than stomach, and stomach ain’t small.” 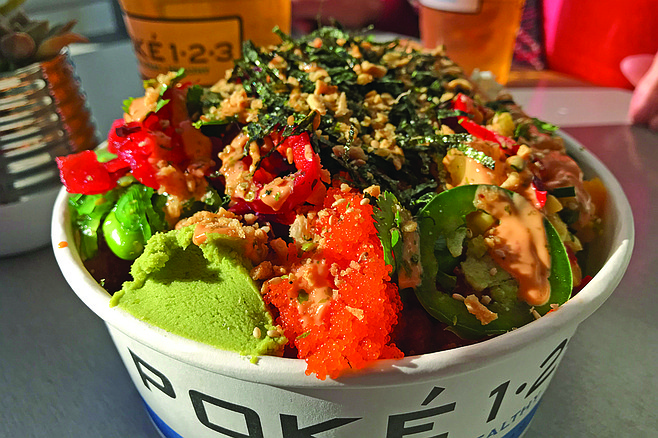 Usually, when I think Hawaiian food, I’m thinking SPAM on rice, hamburger steak on rice drowned in gravy, pork adobo plate with rice and a “salad” of mac and cheese. Delish, but no way we’re talking health food.

Then I dropped in here. Poke 123. Brand new, with a brand old way of eating. You could say pre-European. Pro-healthy. 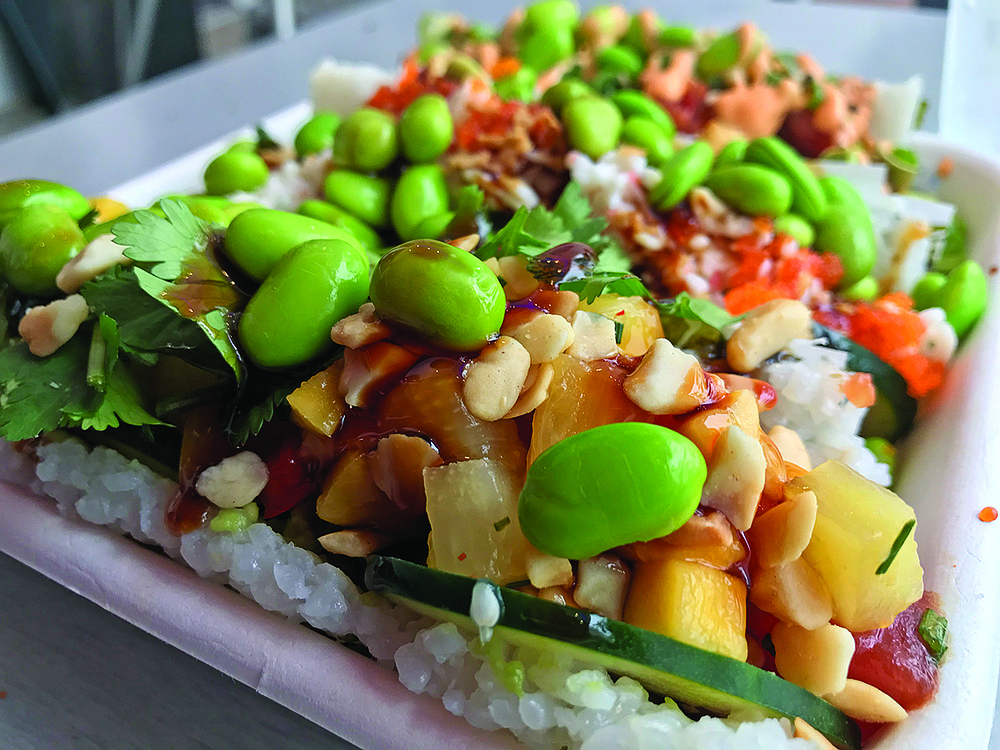 My Waves. Packed with goodness, including plenty of soy beans

Two retired Navy guys just opened it on Orange Avenue in Coronado (they opened their first poke restaurant 18 months ago in IB, expanded to Liberty Station in 2018, and now here). Of course, poke is the thing right now. You have Poke Etc, the Sweetfin Poke chain, Good Time Poke, on and on. First thing is, you’ve gotta be ready to eat raw. For me, no probbo. Sashimi, ceviche, steak tartare, gravlax, carpaccio, same-same.

My friend Annie, not so much. Only thing she’ll eat raw is lettuce. Whatever, we head in to this angled entrance, all fresh-painted in whites and blues, right on time for happy hour (4-7 pm, every day). What I like is they have a little patio outside (with a heater).

“But do they have salad?” says Annie. 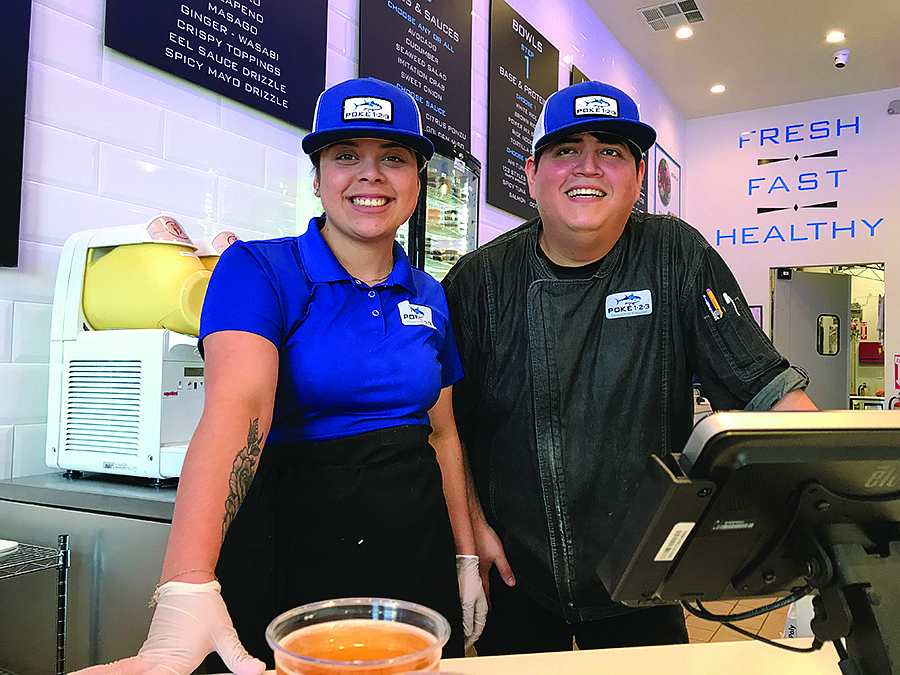 “Just look,” I say. Because it’s all laid out here, from chunks of marinated ahi tuna to green seaweed. You notice: no cooking equipment, like stoves. We’re eating cold-turkey. Okay, cold-tuna.

“At this end,” she says. “Choose your style. Bowls, norittos, or waves. Then choose your protein: seafood, chicken, or vegan tofu.”

I dunno. I’m probably the only guy who didn’t get up to speed on this ten years ago. Annie too, from the expression on her face.

“Noritto is like ‘nori’ — seaweed — and ‘burrito.’ Poke in a seaweed and rice wrap,” Paula explains. She points to — oh yeah — pictures on the wall. And, aha. “The wave” is poke in U-shaped rice tortillas, with dark green seaweed wrappers. Hawaiian tacos, you might say. 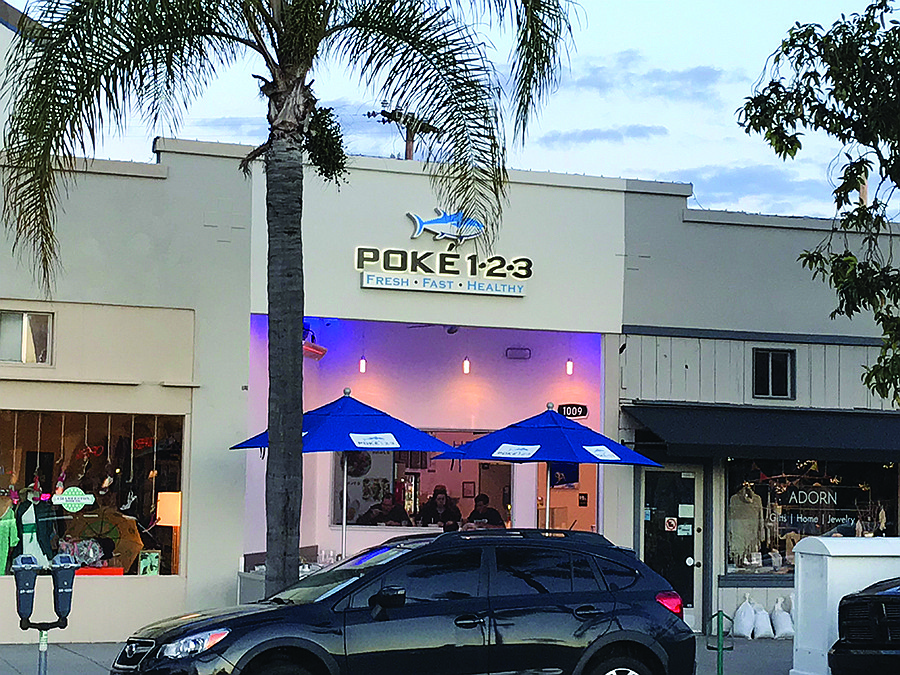 Poke 123 Coronado. IB store is a couple of bucks cheaper, but this is still good value.

“I just want a salad,” says Annie. And she orders a kid-size salad ($7.99). But then she adds the first noritto on the board, “Kapuni” (it means “favorite” in Hawaiian). Oh man. Apart from the two scoops of your choice of protein, they throw in “crab” meat, avocado, cucumber, raw sweet onion, and chopped macadamia nuts. And she gets to add two sauces. A sesame, and a citrus ponzu.

Now Paula grabs a bamboo mat and lays down a square of seaweed, a mat of crushed cooked rice on top, then ahi tuna and salmon, and all the other ingredients, then rolls it up in the bamboo mat, just like traditional sushi places do.

For my poke bowl (regular size, $11.99), I look at the dizzying lists of choices I’ve got to make. I pick the spicy tuna and salmon for protein, and then let Paula have at it. She piles up the brown rice, rice noodles, imitation crab, seaweed salad, a “mango mix” of pineapple, red pepper, and sweet chili sauce, then beets, radish slices, bright orange masago (fish eggs), green onions, wasabi, cilantro, jalapeños, crunchy garlic, furikake (a tangy dry seaweed with sesame), delish green soy beans, and the most important taste-maker, ginger.

We take it all outside. Setting sun’s flooding the patio. Heaters are turned on to fight the icy little breeze.

“Now all we’ve got to do is eat this,” says Annie. “Please have half mine. I’ll be full after the salad.” 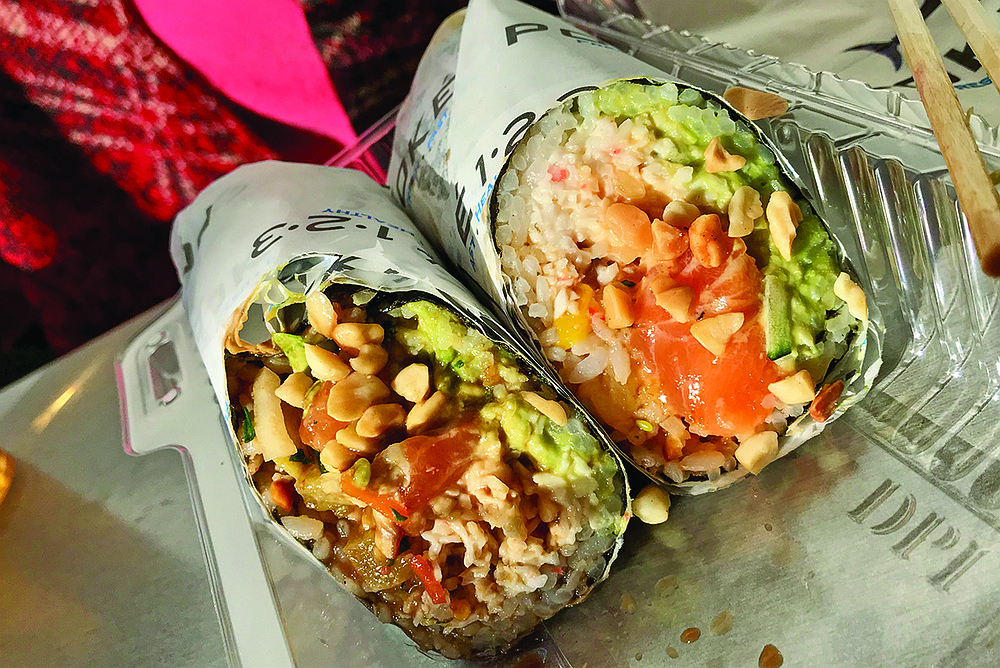 All right! At the speed of greed I grab half, chow it down. Just to help her out.

Here’s the thing though. Unlike the “Hawaiian” food you get at plate food chains, this stuff really feels healthy. Raw tuna, salmon, all those veggies, fish eggs, soy beans. “Actually, this is the real Hawaiian food, before outsiders arrived and introduced beef, SPAM, whatever,” says Annie. She’s been to Hawaii. “This poke craze is great, because it’s going back to the time when Hawaiian food was Hawaiian. Less protein, more carbs, way less fat. I think it’s beautiful.”

Of course, back in the day, fishermen just cut up smaller reef fish (poke means “cut into chunks”), and maybe he’e (octopus). Not tuna. Definitely not salmon. And definitely no pineapple/mango mix to add color. But hey, no big crime. Poke’s like sushi, or pizza. It’s growing up. Breaking out from where it started.

I start packing, because as usual, eyes were bigger than stomach, and stomach ain’t small. Feel like a python that swallowed a pig. The tastes that stay with me are ginger, wasabi, mango, seaweed, radishes, soy, garlic, tuna.

But next day, hey hey! I’m back. Just have to try the wave “taco.” I get one of each, natch. The “123,” (with ahi tuna), the Cali (with imitation crab), and the spicy (with spicy tuna). And the zillion other items hidden inside. Hard as I try, I can only get through two. Which makes me wonder something. I go ask Ruthie the manager.

“Oh yes,” she says. “You can buy a single order of three waves and share it with two of your buddies. No problem.”

Which would mean four bucks each for a really filling “taco.” Add HH beers, and voilà! Feast for three for ten bucks each.

‘Course talking about it makes me hungry. I down the third taco. Call Annie. Confess.

“You know your problem?” she says. “You’re a slave to your greed!”

I'm game to try Poke 123 once. However, I have to warm up to having my food served raw and wrapped in seaweed.