Taylor Guitars’ master guitar designer, Andy Powers has built guitars for Taylor Swift, Zac Brown, Edge from U2 and others

“It’s a rare breed, with maybe a few hundred worldwide, and probably no more than three of us in San Diego.” 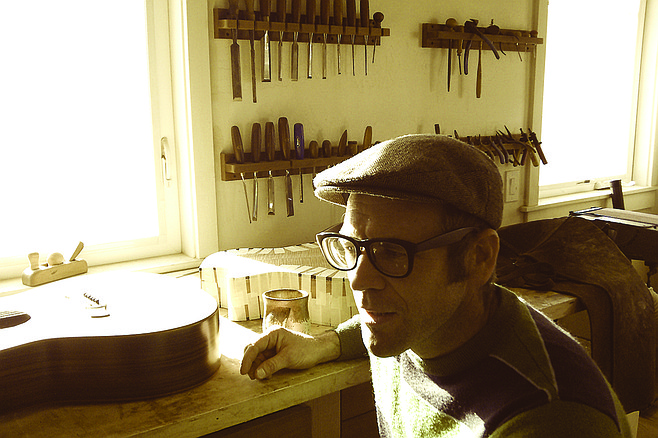 Andy Powers plays a little ditty he made up on the spot on a guitar he built by hand, in the home he rebuilt to perfection. Powers, who ranks among the best guitar makers in the world, is at 38 too young to be on that elite list. While he never charted his future, neither was his career path entirely accidental.

In the mid-1980s, newlyweds Chuck and Nancy Powers were living in a small Encinitas beach rental. Nancy stayed home with the kids, Sam who was around seven at the time, and Andy who was around five. Upon returning from a day building houses, Chuck would often reach for a stringed instrument, Nancy would sit at the piano, and the toddlers would play their little guitars, doing their best to keep up with what Andy now calls “monster jazz players,” including Django Reinhardt, Wes Montgomery, and Tal Farlow.

With the arrival of their third child, Sarah, Chuck built the family a two-story home on Fire Mountain in Oceanside. Never occupied by cars, the garage became a workshop complete with five woodworking stations, going from biggest to smallest. It was there the Powers family produced items out of wood.

According to Andy, “I was around seven or eight when I made my first guitar, which was more like a guitar-shaped object. It broke, the second one broke, and number three held together long enough to play a couple of songs.”

By his late teens, Andy had gained the skill to build guitars and ukuleles professionally. While visiting Oahu, he placed a few of his ukuleles in a shop, on consignment. A few days later, Elvis Costello wandered in, bought one of them, and eventually recorded a duet with Emmylou Harris on that instrument.

When asked if he was self-taught, Powers replies “I can’t really say self-taught, because I have learned from every guitar maker I ever met. But it’s a rare breed, with maybe a few hundred worldwide, and probably no more than three of us in San Diego.”

By his late 20s, Andy found contentment in surfing, playing music, and building a dozen or so custom guitars a year. Then he received a phone call from the co-founder of the iconic Taylor Guitars, Bob Taylor. It took several more calls until Andy agreed to join the team. On January 1, 2011, he became Taylor’s Master Guitar Designer.

The list of famed musicians Powers has built guitars for since then includes Taylor Swift, Zac Brown, and Edge from U2. “I never met him, but I heard Paul McCartney ended up with a uke I built,” said Powers, smiling at the thought. Our interview concludes the way it began, with Powers playing his guitar. The notes resonate through the building’s old timbers as the player inhales the vibrations of a tune he’s just composed.