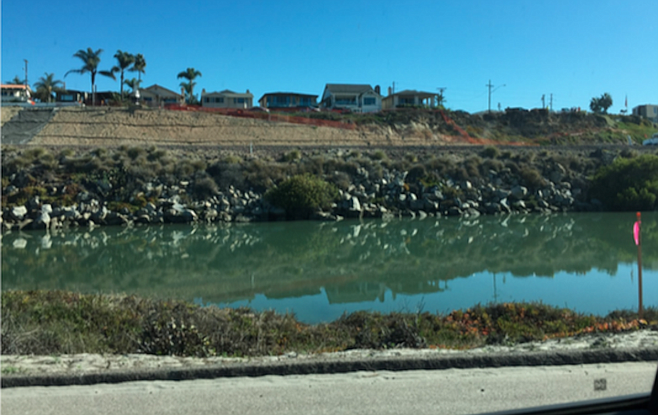 The North County Transit District and SANDAG, with the support of Encinitas's mayor, want to make a temporary construction road near the San Elijo Lagoon permanent, and they quietly took the request to the California Coastal Commission last week – after SANDAG stalled on releasing documents about the change, according to concerned residents. 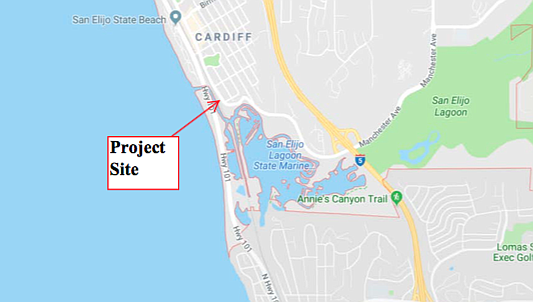 Even the San Elijo Lagoon, where staff is engaged in protecting the wetlands touched by the road, didn’t have time to submit their thoughts on the road, which could give access to a protected part of the lagoon reserve. But the transit agencies did have time to get a letter from Encinitas Mayor Catherine Blakespear, who wants the road to remain.

The city council has not heard or voted on the temporary-to-permanent road, according to the city clerk, who told me my inquiry is the first time they heard about it. Blakespear was careful in her language, indicating the city had no objection to making it permanent though it could one day serve as a trailhead. The city engineer said he preferred not to discuss it because it’s not a city project .

SANDAG and the North County Transit District are building double tracks for trains through the area from the south end of the lagoon to Cardiff by the Sea. The $77 million project replaces the aging wooden trestle with a concrete bridge, two parallel train tracks and a new pedestrian crossing at the south end of the project. That’s why SANDAG’s contractors built the temporary road. It starts atop the bluff about four houses north of the curve where San Elijo Avenue turns to north-south from the curvy east-west road that leads past the lagoon conservancy entrance and to the 5 freeway. 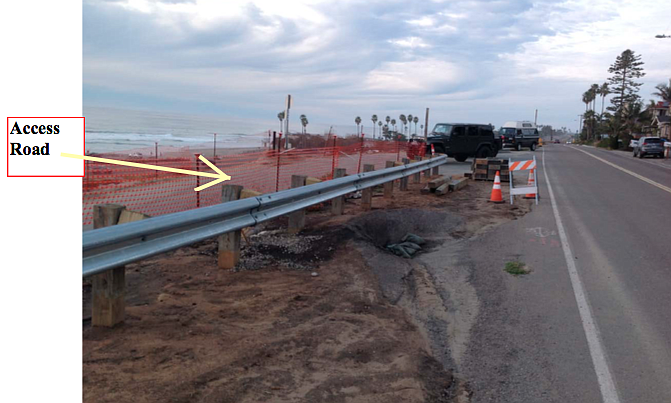 The request to make it a permanent maintenance road originated with the transit district and includes fencing, bollards, and a gate to restrict access to transit district personnel, according to the coastal commission report. Requests for comment from SANDAG went without a response.

Doug Gibson, the executive director of the lagoon conservancy, was traveling and unable to respond. The neighbors up on the bluff are living through the construction with the complaints you’d expect to hear: noise, traffic back-ups and congestion, dust. But they didn’t expect to see the temporary road become permanent. They fear the road will allow for illegal fishing in the lagoon, for trash dumping, parking for partying and vice, as an off-road bike access and even for using the land as an unofficial off-leash dog park, residents said in the half dozen letters that came in too late to be added to the coastal commission report.

Ellen Burr said she was astonished to learn the road would become permanent – especially since there was no notice to the neighboring homes. She went to Encinitas city hall on Nov. 29, and couldn’t get any information. “They said the road isn’t theirs, it belongs to SANDAG,” Burr says. Mayor Blakespear wrote to the NCTD the same day that Burr, who lives on the bluff above the lagoon, went to the city to try to get whatever documents the city has on the decision to make the road permanent.

“SANDAG has been stonewalling since the end of January,” Burr says. “First they said I was asking for too much, that it’s too much work, and then they gave me a data dump of 90 pages that were not responsive to my request.” The records she wanted were withheld until the day after the meeting, she says. “I asked for information on how the temporary road became permanent and about the guard rail system they’re building,” she said.

The coastal commission heard the matter and agreed it’s within their purview but delayed a decision until they hear more from their scientific staff and the lagoon conservancy, staff said. “We work very closely with the people from the lagoon and we are very interested in their thoughts on this,” he said.

Doug Gibson, from the San Elijo Lagoon Conservancy, responded to a request for his thoughts, saying the conservancy takes no position on the road but its staff and supporters oppose the proposal for a trail that would start there.