House “boasts one of the most intricate collections of hand-printed Bradbury & Bradbury wallpaper in the country.” 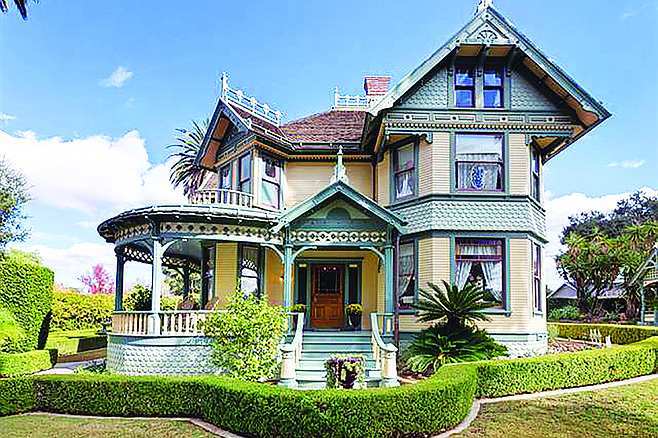 Escondido’s Beach House may be more than 15 miles from the coast, but it’s filled with historical charm and old-world craftsmanship you won’t find in a modern oceanfront mega-mansion.

Built in 1896 for real estate broker and insurance salesman Albert H. Beach and his wife Anna, the two-and-a-half story home has four bedrooms and three baths, with an estimated 3300 square feet of living area.

“This famed Queen Anne Victorian estate is one of San Diego’s cherished architectural treasures on the National Registry of Historical Places and part of the Mills Act, a state law allowing local governments to reduce property taxes (by as much as 70%),” proclaim listing materials for the home.

Inside, the home “boasts one of the most intricate collections of hand-printed Bradbury & Bradbury wallpaper in the country,” along with “hand-crafted wood doors, trim, knobs and hinges, genuine antique lighting and fixtures, turn-of-the-century finishes and furnishings from all over the world, including the personal homes of famed historians and figures such as Ulysses S. Grant and Wyatt Earp.”

The home’s “generously proportioned, sunlit rooms” include formal living and dining rooms, a parlor, garden, and breakfast room, many of which feature detail work or additional intricately-patterned wallpaper on the ceilings. 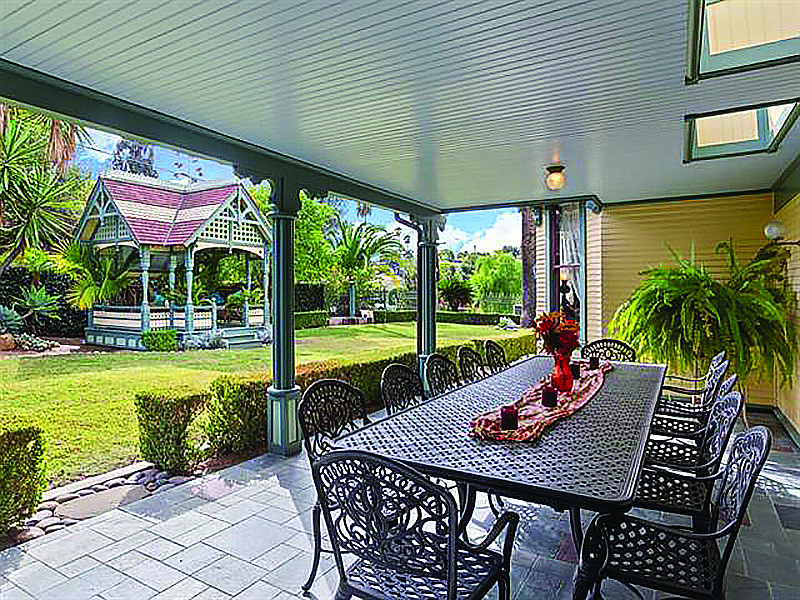 The property also features several covered patios for outdoor living, along with “an elaborate 2001 award-winning Swiss Victorian gazebo.” The half-acre grounds occupy three times as much land as a typical plot in Escondido’s historic district, and are formally landscaped with ornate hedges, mature wisteria, and a Victorian water feature. The property is surrounded by a “gold-tipped, hand-welded privacy gate.”

The Beaches, who arrived in Escondido when the town’s population barely topped 1000, didn’t stay for long. After four years, Albert and Anna sold their house at the corner of Juniper and Seventh, moving to Los Angeles, where Albert would eventually take on a massive development project in the Hollywood Hills. Beachwood Canyon, site of the famous Hollywood sign, bears his name.

Henry Putnam, an inventor who created a type of barbed wire, a sealing system for bottles and jars, and carpet tack, arrived from Ohio and bought the home in 1900. He stayed until his death in 1915, playing a major role in the development of Escondido’s water system. Henry Timken, another inventor who made his fortune designing carriage springs, then purchased the home as a gift for his daughter and son-in-law. A later design, the roller bearing system used even today in many automotive applications, allowed Timken to further his wealth – by 1923 an estimated 90 percent of the nation’s bearings were manufactured in his Ohio factory.

Later owners included a local hardware store owner who purchased it for $28,000 in 1945 and a former Palomar College dean who, after buying the house in 1968, finally replaced the original wood-burning stove in the kitchen.

The home eventually fell into disrepair, and was eventually purchased by art dealer Harry Parashis and his wife Letitia for a reported $300,000. The Parashises spent several years working with historical architecture experts and skilled craftsmen to restore the home to its former glory.

“The house’s restoration has received more than 18+ editorial and design awards, and in 2001 was the subject of the PBS TV show Restore America,” notes the listing.

The home’s most recent sale was in 2016, when it was purchased by Mark and Julie Moore for a reported $611,000. It was re-listed on January 1 with an asking price of $3.3 million that remains unchanged to date.