Lorena Gonzalez and Nathan Fletcher go to Disneyland for free 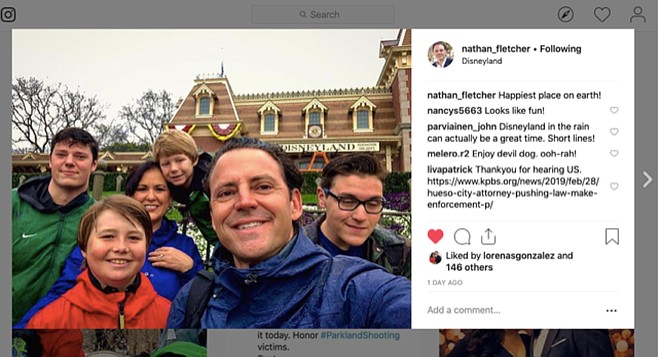 It's almost spring, time once again for desert flowers to bloom and the annual appearance of Assembly Democrat Lorena Gonzalez and family members at the gates of Disneyland.

Gonzalez – who recently declared she will run for California Secretary of State in 2022 – has long been an unofficial cheerleader for Anaheim's magic kingdom, and this year was no break from tradition.

"With all my boys at @Disneyland today!" she wrote in a March 2 tweet featuring a closeup of the legislator wearing pink mouse ears alongside husband Nathan Fletcher and accompanied by shots of the couple's children. "Not stopped by a little rain!"

Added a comment from an admirer on Facebook: "You both are amazing parents! It must be quite challenging balancing careers in public service with family time! So happy to see you both enjoying your family!" Noted another: "Rainy days are the best days at the park. No long wait times for rides and less foot traffic all around."

No official word yet on how Gonzalez managed to pay for this year's family outing to the pricey park, but past financial disclosures show she and Fletcher, elected to the county board of supervisors last fall after his wife flooded the race with campaign cash, have been assisted in their parenting by free passes from the Walt Disney Company.

"For complete transparency, I have included gifts to my spouse, who is also an elected official," the legislator declared on her most recent disclosure filing with the California Secretary of State's office, dated February 28.

On March 3, 2018, the document shows, Gonzalez got four free Disneyland tickets valued at $470, "1/2 myself, 1/2 to my spouse." The year before, on April 15, 2017, she also picked up a $470 admission freebie from the entertainment giant, and on May 3, 2014, Gonzalez reported getting two free park passes valued at $274 from the Disneyland Resort Government Relations department.

The San Diego legislator is not alone in receiving free admission to what describes itself as the happiest place on earth. Per a tally last month by the Sacramento Bee, Disney has handed out more than $33,000 worth of free tickets to its California theme parks since 2000.

The gratis admissions represent part of the cost of doing business for the company in politically contentious California, where Bernie Sanders, U.S. Senator from Vermont, waded in last summer to blast Disney for failing to pay employees "a living wage."

After the company agreed to pay $15 an hour by 2021, Sanders wrote in an August 27 tweet, "Congratulations to the courageous workers and their unions at Disney World for their historic victory. I applaud everyone who stood up to demand that workers at one of the wealthiest corporations in the world should have a decent standard of living."

Disney has been the target of repeated criticism regarding controversial findings last year that 11 percent of 5000 of its workers surveyed had gone homeless at least once in the previous twelve months and the parks failed to provide childcare.

Besides her free time at Disneyland, Gonzalez reported splitting other gifts with her husband last year, including half of $169 worth of food and beverages in August provided by Social Compassion in Legislation, and a $400 admission to an unspecified fundraiser from San Diego developer Dan Feder in October.

Gonzalez also shared with Fletcher $450 of "resort services" provided by the Governor's Cup Foundation at a Pebble Beach golf tournament in July, where free "lodging, reception, and food" for the legislator totaled $1344.63.

Two gift bags worth $400 each were received by the couple from the Sycuan Tribal Council in November, the report says. But the bags "were returned to Sycuan upon notification of cost," according to a footnote.

On the occasion of its anniversary celebration last fall, Sycuan provided a total of $538 worth of "food/beverage for spouse and myself. Both spoke @event." In addition, on November 21, the disclosure says, Gonzalez and her husband split four free passes from NBC Universal worth a total of $470.

Gonzalez and Fletcher should not be accepting any free tickets from theme parks. This is reprehensible conduct. Shame on them both. All that money should be returned.

It's not free. Their constituents paid the price of being replaced by the corporate lobbyists and special interests that bought their offices for them. They are California's most corrupt couple. It's quite an achievement. No wonder they appear to pleased with themselves. Great photo! All politicians ought to be required to post their treasons on Twitter.

The Democratic Party needs to Clean house and dump these grifters or they will lose to Trump! Scrape 'em off, democrats! Dump the mini-Trumps! We demand public servants who pay their own way, serve people, NOT corporations like Disney and Core Civic (private prisons). While Lorena Gonzales Fletcher and Nathan Gonzales Fletcher are enjoying Disneyland, their financial backers are locking asylum-seeking children in cages at the border. These people are FRAUDS!

Say what you want about Duke Cunningham, but at least he sold out America for a fancy french "toilet" instead of settling for Disney tickets. Go to jail. Go Directly to Jail.

he hired a hooker then kicked her out because he thought she wasn't good enough looking for him! Fat slob.

Follow the money and you will find who controls the politician. Both parties are sold to the highest bidder. The Supreme Court ruled that money is speech thus the more money you have the more speech you have. The politicians only listen to those who have the most speech.

I thought they never left Disneyland.

Great to see Lorena Gonzalez and her family enjoying the Magic Kingdom!