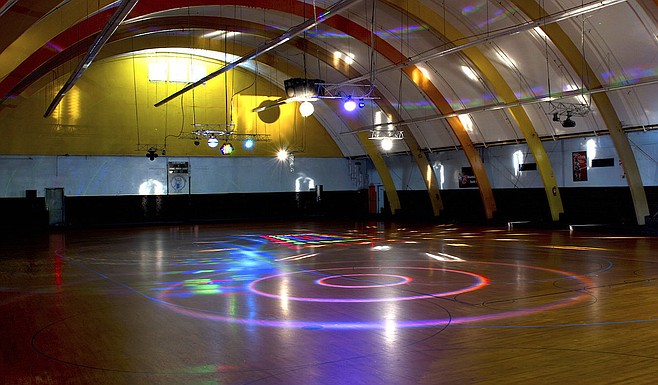 Linda Vista residents were stunned to learn Monday night that Civic San Diego, a wing of city government, is quietly selling off the land beneath the historic building that is Skate World, where 15,000 people come each month from all over the region to skate, celebrate and drop off kids knowing they’ll be safe.

“That place means a lot to a lot of us and I am angry about this,” said Margarita Castro. “My children grew up skating there. I know what it means to the community.”

On Tuesday, Skate World’s manager Gary Stang, who took over the region’s only indoor skating rink in 1975 — where his father worked and he had handed it over to his son and daughter in law – told residents his business had to put in a bid to buy the place from CivicSD. When the secret process was over, Civic SD had picked a company called Pacifica that plans to build a big box store there.

Stang found an investor – who is willing to match whatever Pacifica has offered – and bid on the building in June. He was shocked in January to learn the pseudo redevelopment agency had decided on a company that intends to build and lease a Target-like store. “I was under the impression they would look for the highest and best use,” Stang said. Calls and messages to CivicSD went without response on Tuesday and Wednesday. Residents say one of the best things about Skate World is that they can drop their kids off and run errands because they know their kids are safe. “I don’t know of another place where parents can drop off their kids knowing (Skate World staff) won’t let the kids out until their parents come,” said Dorothy Perez.

Much of the neighborhood was built in the early 1940s as housing for nearly a thousand employees of Consolidated Aircraft Corp. – where the B-24 Liberator was built, the company headed by Reuben H. Fleet.

It is near legendary that the neighborhood sprang to life when nearly 3,000 homes were built in 259 days. It was the site of San Diego’s first shopping center, dedicated by Eleanor Roosevelt. There’s a plaque commemorating the center's history and it is listed with the city’s Historic Resources Board. In 1954, Skate World was established. The city bought the property in 2000 and it shows up on CivicSD’s rolls in 2006. By 2014, CivicSD had identified the adjacent properties at 6901 and 6907 Linda Vista Rd. as properties that should be sold for development. Last year, it went out to bid and CivicSD found buyers.

The agency was created in 2012 from the ashes of Centre City Development Corp. redevelopment agency after the courts ruled California’s redevelopment scheme was illegal. Though it presents as an independent body, Its board is appointed by and rocked with scandal over allegations, brought in a lawsuit by board member Murtaza Baxamusa, that alleges conflicts of interest in an agency ripe for corruption.

Since then, current and former CivicSD employees have become whistleblowers and plaintiffs in their own lawsuits

The neighborhood’s relationship with CivicSd has had benefits, too, including the opening of a charter school in one of the most distressed areas of the city. Last year in January, the city cut the ribbon on its largest outdoor skate park, located in Linda Vista.

The agency brought in a company from L.A. to maintain the historic building, so not much has been done. Skate World doesn’t even have a lease, Stang said. “We’ve been on month-to-month for 17 years,” he said.

Community activists and volunteers were angry at how quick and how quiet the decision was made – and that CivicSD apparently didn’t consider the neighborhood or the 18 employees and thousands of skaters who view the polished wood floors of Skate World as a treasured regional asset.

Corey Pahanish, the executive director of the Bayside Community Center, spoke about the surprise decision. “It signifies a breakdown in the system that this happened,” he said. “Let’s call this what it is: It’s gentrification.” The decision is moving rapidly; it goes to the city council for approval in mid-March.

Christina Stang, who manages the rink with her husband, says what’s ironic is how well the skating rink is doing. “We are doing so well we need to do renovations but how do you do that when you could get kicked out at any time?” she said. “It’s so disheartening what’s going on, that we are getting kicked out of the community we support.”

It's worse than gentrification: it's the disintegration of any accountability by our public servants to the public they're paid to serve. Betrayals of our communities occur with numbing frequency, but the petty shamelessness of this still shocks.

Adding more big box retailing is so foolish. Around the nation there is a massive oversupply of retail space and that explains all the vacant space in centers and along the streets. The trend is in the opposite direction. Another story today describes a push to remodel Clairemont Square and put in housing. That at least fits in with reality of present and future retailing. Leave the rink right where it is!

Skate World fans from all over the county have to act now to demand that City Council kill this terrible plan to replace Linda Vista's 65-year-old landmark Skate World with a big box store. (Also, maybe I'm wrong, but it doesn't help to say three times in one story that SW is a great place for adults to drop off their kids to run errands!) It's important to save Skate World: it's historic, it's amazingly fun, its longtime owners want to purchase it and maintain their neighborhood relationships. Let's hope the newly-configured City Council will deep-six this typically soulless CivicSD development proposal.

Wonder what you had to say?

In the 1980's lived in the Linda Vista area in a community called Fashion Hills off Ulric Street. The Vietnamese moved in and built businesses and the Von's became a Vien Dong. But Skateworld was a magical place where everyone, no matter of any classification, enjoyed skating around with each other. My mother skated there when she and her friend were in their 70's. Were else are active elders going to find a safe place to have fun?

To me it's kind of irreplaceable, when it's gone, like all the drive-ins, miniature golf, bowling alleys, we lose another physical activity to sedentary hobbies.

There is a petition on Change.org about this. Please consider signing it and sharing it with others. Just click on the link below:

"San Diego City Council: Vote no on The proposed sale of Skateworld to Pacifica Enterprises"

We have to find a way to get OUR city out of the control of a handful of rich and powerful people and corporations that just see the place we live in and love as a place to make money off. Sadly both the Republican and Democratic politicians are supported by these folks, both to get in office, stay in office, and then their post office careers. The Republicans on the City Council will simply vote yes on the sale, but the Democrats will also vote for it, claiming we need a box store for housing or some such nonsense, and claiming everyone trying to save it are NIMBYs and therefore selfish and don't understand how to grow a vibrant city, or some other crap. Both parties feed at the same trough, we need to look for politicians are actually interested in working to protect and make the city better.

You are so right about bipartisan support for terrible ideas, especially ones that will bring money into politicians' re-election campaigns. Maybe some issues on which the entire City Council caves are worth remembering in order to vote people out of office at the next available opportunity. Plus signing the petition noted above and speaking up at the Council meeting where they plan to sell out. Skate World is worth saving. Also, candidates for Mayor need to reveal their positions on this question.

Claire Burns Canetsey on FB whined: "No one knows when meetings are & you have to search if you watto know"