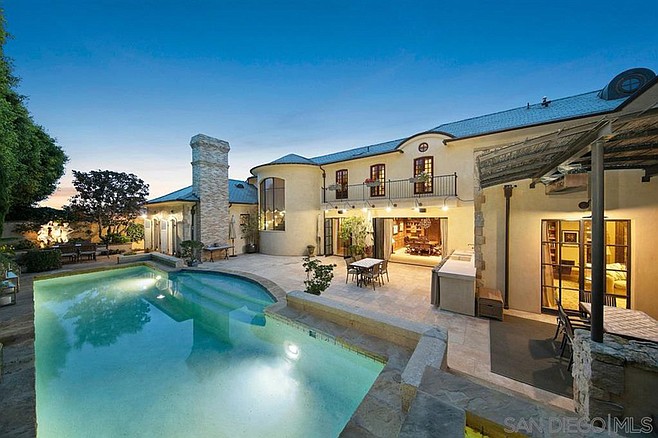 Built in 2004, the 8576-square-foot estate home at 1275 Virginia Way in La Jolla is described as “an authentic example of French Colonial Revival” architecture.

Though recently constructed, the home features “countless architectural elements and antiques that date up to 500 years,” including an archway and door to the wine cellar imported from a French jail (jailer’s keyring included), an 11-foot double front door predating World War I with “mustache hand-forged hinges and a bullet lodged in the exterior molding,” along with a candle-lit chandelier in the dining room (wiring is in place to convert to electric, the listing assures).

In addition to its five bedrooms, five full and three half baths, and the aforementioned wine cellar, the home includes two offices, a home theater, full bar, billiards parlor, home gym, and a “laundry/craft room.” The main kitchen features “reclaimed pavers on the floor with decorative new tiles interspersed” that follow up to the coved ceiling, multiple Sub-Zero refrigerator drawers to supplement the commercial walk-in fridge, and dual dishwashers, ovens and ice makers. The range is flanked by the “antique fireplace columns and mantle” that were also imported from France. 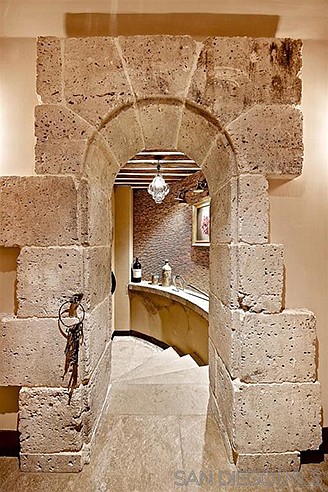 The wine cellar’s entrance, imported from a French jail.

The estate’s “impeccable attention to design, scale and proportion” includes exotic finish work: a stone arch entryway, “Oeil de Bouef” zinc windows at a second entry, “custom cut new limestone” flooring, a living room fireplace with “Renaissance stone mantel” and hand-painted ceilings, and a dining room with wood-paneled walls and bronze accordion doors that fold open to the back patio. Double brick arches form the passageway from the kitchen to the family room, which boasts a Douglas fir tray ceiling and concealed bookcase. The wine cellar’s lights were created from sandblasted antique Dutch milk bottles, while the reclaimed pavers lining the ceiling and walls were installed backwards to lend an appearance of greater age.

One of the three en-suite bedrooms features a copper bathtub, another, a sleeping loft. All have been outfitted with cork floorboards for noise abatement, and two feature walnut shutters reclaimed from a convent in France. The master suite, meanwhile, is equipped with dual bathrooms, each with “farmhouse stone sinks” and “plaster reliefs above sinks from France.” One bath has a bidet, walk-in closet, and “vintage solid marble bathtub.”

Outside, there’s another Renaissance-era archway, a fountain statue purchased from an estate in Kentucky, an outdoor kitchen with fireplace, lap pool, and spa. A four-car garage provides parking, with more available on the stone driveway (accessed through a private entry gate).

Public records show the home’s owner as Richard Enberg, who purchased the property in 1999 for $850,000 and spent the next three years overseeing construction of the mansion – the listing advises prospective buyers to be prepared to spend at least an hour touring the property to appreciate the attention to detail that went into its design.

Readers may be more familiar with Richard through the nickname Dick, which Enberg used through several decades of national sportscasting for CBS, NBC, and ESPN. From 2009 through 2016 Enberg served as the TV voice of the San Diego Padres. He passed away in late 2017.

The Virginia Way mansion was listed for sale for the first time since its construction in late May, with an asking price of $9,800,000 that remains unchanged to date.