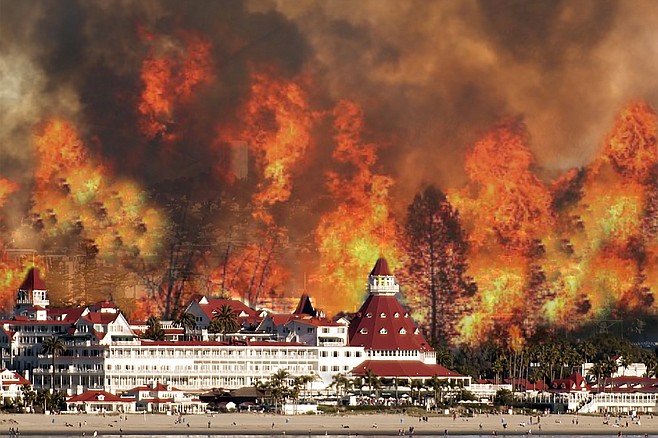 “SANDAG says we may have to make room for 1800 more housing units,” says longtime resident Reginald Cashflow. “On Coronado, an island with about two square miles of buildable real estate that already holds 9500. All because the Naval Station gives work to a lot of people, many of whom don’t even live here. Well, they’ll have plenty of room to build them now. And after the insurance pays out, I’ll have plenty of money to build somewhere else. Maybe somewhere that doesn’t have to deal with an ungrateful mayor from a nearby town who whines that we aren’t doing enough to change the fact that he lives next door to a river of Mexican sewage. And while I’m at it, somewhere that doesn’t bend over and take it in the shorts when some out-of-town tech giant decides it’s time to jam a 43-foot 5G telephone pole right up your view.” (Cashflow’s comments appeared to refer to Imperial Beach mayor Serge Dedina’s comment that Coronado, “a city laden with millionaires…has done almost nothing to help us” deal with beach pollution, and AT&T’s decision to install 5G antennas, respectively.) “I mean, what’s the point in having enough money to buy a huge mansion on a tiny island if it doesn’t protect you from this sort of ‘public good’ riff-raff? I wonder how things are down in St. Bart’s.”

I wish I had rich people problems!