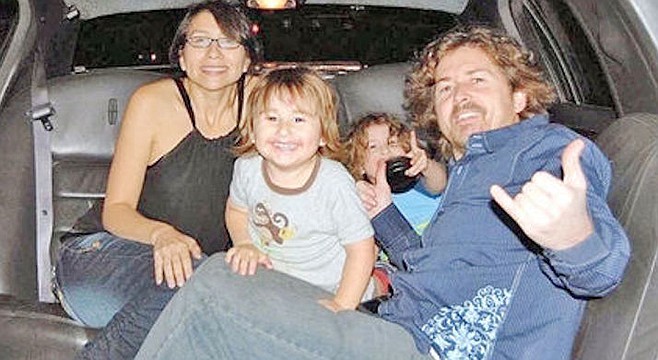 After the mysterious 2010 disappearance of the McStay family of Fallbrook, Charles Ray Merritt, 62, was convicted of the quadruple murder on June 10 in a San Bernardino County court

Joseph McStay, his wife Summer, and their two sons, Gianni, age 4, and Joseph Jr., age 3, seemingly disappeared from their home near the I-15 freeway, southeast of Highway 76 on February 4, 2010. 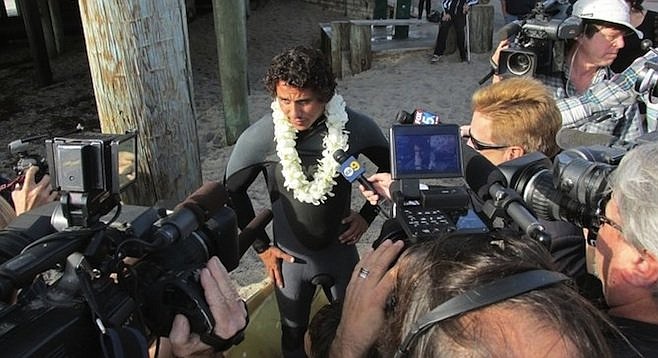 Ken Aranda, brother of Summer McStay, at the paddle-out for the McStays in January, 2014

Uncooked food for a dinner preparation had been left out on the kitchen counter. The family dog wasn’t fed. McStay’s cell phone and credit cards weren’t used after the disappearance.

Days later, the McStays' car was found in a parking lot at the U.S. border in San Ysidro. A security video showed a family of four walking into Mexico. Some members of McStay’s family swore the grainy images had to be the missing family of four.

Over the next three years, the McStays became the subject of an international search; there were reported sightings as far away as Ecuador and Thailand. A psychic had predicted the family was buried under the old Highway 76 Bonsall bridge in the San Luis Rey riverbed, which caused a search by volunteers.

Over months the San Diego County Sheriff’s Department seemed to have no real leads. At least no suspects, and not many answers. The family claims the department bungled the cased, trying to find connections to Joseph’s business and drugs; he did business with Mexican suppliers for his water feature design company. The FBI eventually got involved, but the case went cold.

Neighbors who knew the McStays from their original home in San Clemente claimed none that was true. At the time, Lisa Summers, a friend of Summer McStay’s sister, told a Reader reporter, “The McStays were a loving Christian family that always showed the love they had for each other.”

On November 11, 2013, an off-road motorcyclist reportedly found a human skull in the high desert near Victorville and led San Bernardino County Sheriff’s detectives to the site, which ended up being shallow graves containing the bodies of the four victims.

After the discovery, not much was said about the ongoing investigation being conducted by the San Bernardino County Sheriff’s Department. The department remained silent on the issue until the arrest of Merritt almost a year later.

As the trial progressed, the families of the McStays were vindicated. The McStays were brutally murdered by a former business partner, over a $43,000 deal Merritt thought he was entitled to. They had not planned to leave their house that fateful night. They were kidnapped. There was no connection to drugs.

San Bernardino County District Attorney Jason Anderson is seeking the death penalty. However the DA may be relegated to accepting the fact that Merritt may never see the gas chamber, at least not until a new governor is elected in 2022 or 2026.

Governor Gavin Newsom has halted putting the convicted to death in California, under personal and moral grounds. “Governor Newsom has a duty to uphold the law, including California's death penalty statutes which voters have upheld since at least 1978,” wrote DA Anderson in a published statement.

To this day, the motorcyclist that supposedly discovered the bodies has reportedly not been identified. No one appeared in court to testify on the initial finding of the gravesites. A family member, who asked not to be identified, previously told a Reader reporter he believed someone involved gave up the gravesite’s location in exchange for some kind of deal with law enforcement.

"They were kidnapped." I hadn't heard that before. All the theories I heard held by the cops were that they didn't leave that house alive. And that makes more sense, in that it is hard to imagine how Merritt could have overpowered two adults and taken them and two little kids to Victorville and then bashed them to death with a hammer. But, we will never know, will we?

Merritt then proceeded to get into their house and use the McStay computer to issue checks to himself. That's indisputable and highly incriminating, but the San Diego sheriffs didn't check that out. Why? Well, they didn't think the disappearance was a crime, and they didn't treat the house as a crime scene. Those "sightings" of the family were just about as useful as many other instances of sightings, as in useless. The car at the border was just a ruse, and good police work would have treated it that way. If, somehow, they were fleeing Mexican drug cartel hit men, why head to Mexico?

Merritt had access to the house and plenty of time to sanitize it. Since it wasn't treated as a crime scene, no crime scene investigators checked it out. There was plenty of time to clean anything incriminating out of the car, too. Maybe the car was involved, maybe it wasn't. Again, we'll never know. Merritt was, along with family members, among those who raised the alarm about the disappearance. Handy way to deflect suspicion, wouldn't you say? Gore defends the way his department handled the disappearance. Did anyone expect differently? He always is defending the deputies, and he has to do a lot of defending.

As to Merritt, when arrested he claimed that he was dying of congestive heart failure. And he said he wanted a speedy trial to clear him. After some months or a year or more he fired his court-appointed attorney because the case was taking too long, he claimed. He wanted to defend himself, and the judge allowed that but appointed advisory counsel because it was a death penalty case. About two years passed and Merritt went back to court to get counsel, claiming that he couldn't mount a proper defense. And that was granted. Each of those changes started the court clock again. For a guy who was dying, he survives, and ended up getting neither a speedy trial nor acquittal.

The death penalty in California is moribund. Even if he's sentenced to die, he'll never meet an executioner. He's too old, and we may never see another execution in the state. It should be remembered that California now executes by lethal injection (sometimes called "riding the needle") and not the gas chamber. As far as I know, that method isn't even an option. A guy who killed two small children is almost certain to get the death sentence; kid killers are treated more harshly than other killers.

There is so much to this case; Merritt doesn't look hale and healthy, but he's been locked up in San Bernardino for five years. They got the right guy; Merritt dunnit.

His defense team used the SODDI defense. All they had to do was convince one juror. The prosecution had to convince all 12. He will probably get the death penalty and die of natural causes in prison. And, yes, the Sheriffs Department fumbled and bumbled the investigation just as they have the Zahau (sp?) "suicide".