What calzone means in Italian

How long since I’ve had a straight sit-down Italian meal? 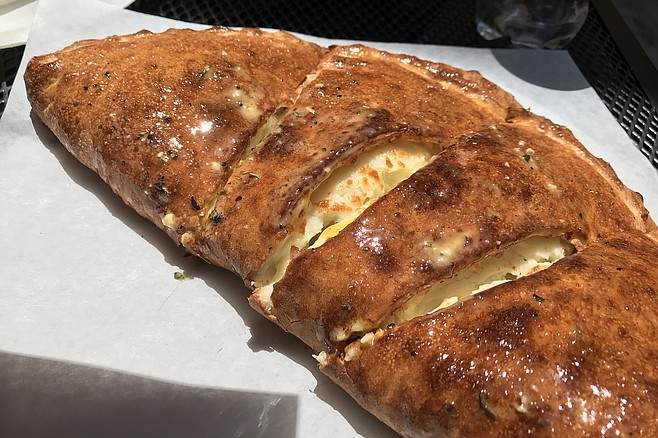 This is Hank on the honker. Seeing quite a bit of Hank recently. Forgot how much he’s with it when it comes to getting boocoo nosh for nitnoi bucks. (“Nitnoi?” “Little,” in Thai.) 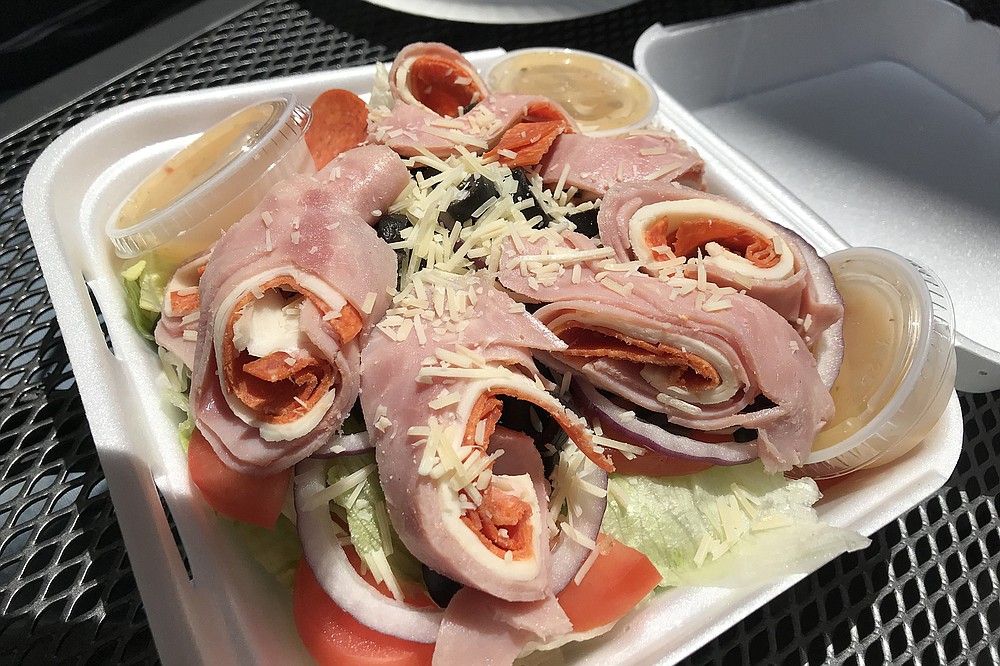 Salad - plenty of meat and cheese.

Natch, I have to come and find out. I jump on the 225, the classy new stretch bus service out to East Chula Vista, and get off at the Heritage Station, on East Palomar. You find yourself between a really nice park on one side and a really nice tree and arches-strewn neighborhood on the other. Who knew?

“That’s what calzone means in Italian,” says Hank. “Stocking or trouser. Or sometimes even shoe. Like huaraches in Mexican food, right?”

Huh. Way I think of a calzone is like a pizza folded over on itself. 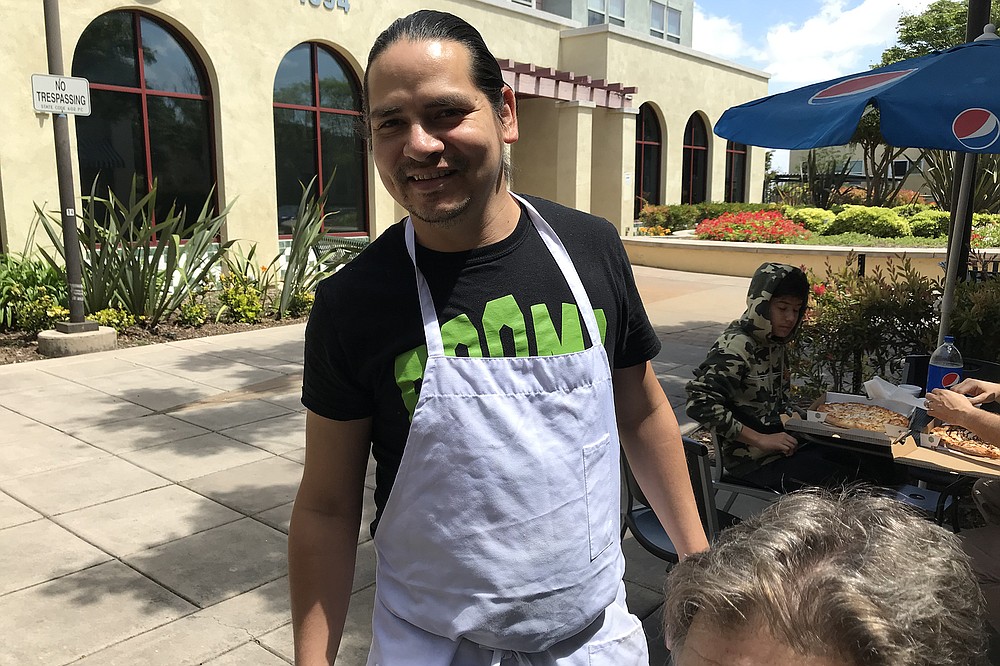 “Think like stuffed stocking, say at Christmas,” says Hank. Hank! Quiet like a dormant volcano. You never know when he’s going to come out and blow your mind with stuff like this.

“Better order quick,” he says. “I come here a lot. They take a long time to prepare stuff. Good part is you know it’s all fresh-cooked on the spot.”

Hank says this is an offshoot of the Spring Valley Bambino’s (7720 Paradise Valley Road, Suite 101a). And apart from giant pizzas, which can go up to fifty bucks, their stuff is really cheap. “You could just pay out $1.99 and get two pieces of hot garlic bread,” Hank says, “or garlic cheese bread for $2.99. That’ll keep you going if you’re broke.” 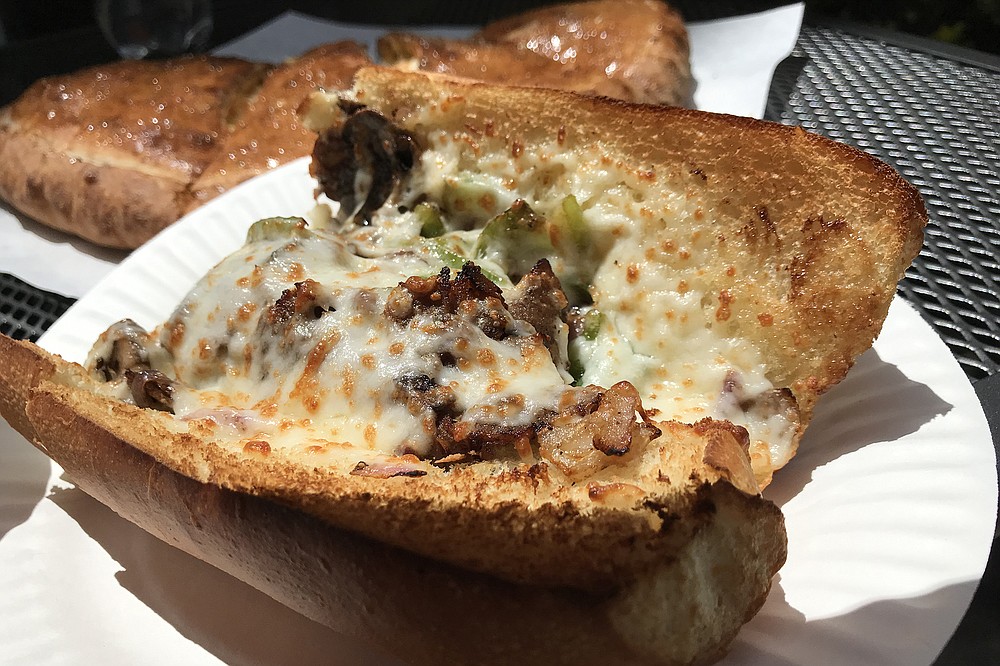 So yes, it’s standard stuff, but at these prices, that’s okay by me. Also, how long since I’ve had a straight sit-down Italian meal? And on such a beautiful, peaceful, modern li’l patio away from traffic, and filled with folks, from retirees to students? Part of this complex is a school. It’s modern, and yet feels nicely lived in.

Richard comes out. Leaves a big glossy menu. And, ah! Calzone. Starts at $10.99 for a 12-inch with one stuffing (anything from bacon to spinach to mushrooms to pineapple). For $1 extra, you can get more specialized things such as anchovies or feta. 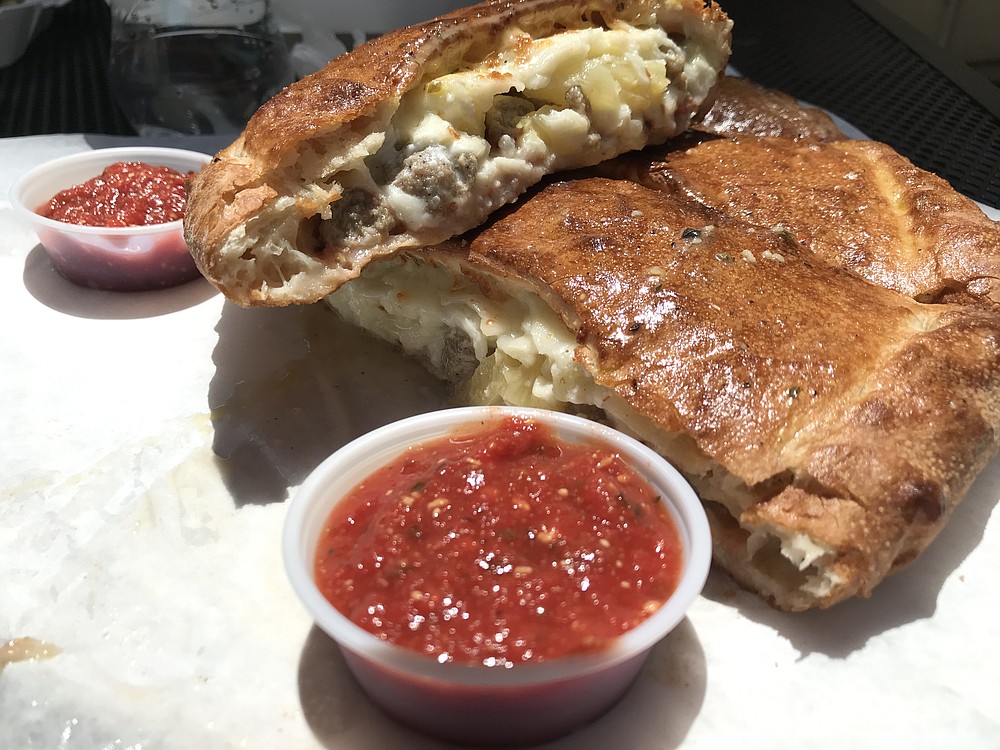 “I always get the Philly cheese steak with chicken,” Hank says. “But why don’t we split a salad, too?”

He’s already tracking one down. Choice is Greek, Chef’s, chicken Caesar, or Antipasto. They all start at $4.99 for the small, except the chicken Caesar is a dollar more, in all sizes. Hank talks with Richard. Wants certain things. I know Hank’s muy particular when it comes to salads.

When Richard turns up with all the fodder (and it does take a good twenty minutes), first up is this polystyrene box of lettuce, tomato, onion, with a half dozen rolled ham and cheese and pepperoni toppings, with lots of parmesan and black olives. And three bowls of oil and vinegar mix. Man. This in itself would be enough for both of us.

But then comes Hank’s steaming-hot Philly cheese steak sandwich. It’s a split baguette with melted cheese covering a multitude of mushrooms, bell peppers, and chicken meat. Scrumbo-looking! But hey, nothing matches my giant rollover. My calzone. It glistens golden in the sun. At the last moment I ordered an add of sausage, along with the pineapple. Glad I did. It’s this golden crust, though, that’s the glory. I take a giant cheezy, sausagey, pineapple-sweet, filo-ish pastry mouthful.

“Not exactly,” I say. “Tastes like Hawaii meets Italy.” 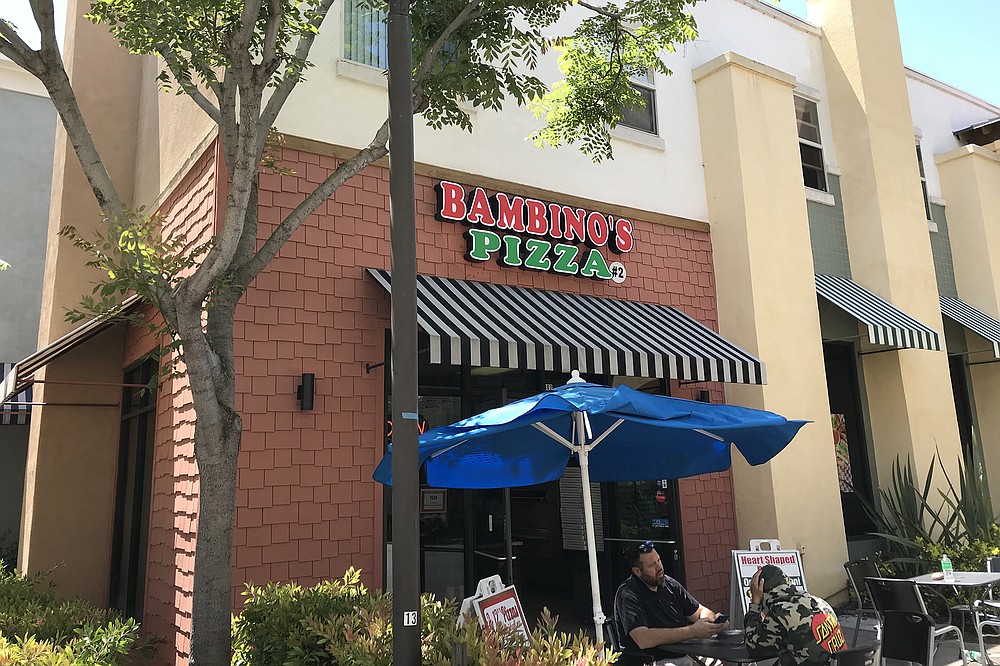 Fact is, I’ve come back around to pineapple. For the longest time I have kind of despised it in anything “serious,” as ruining the “true” taste of things like pizza or even fish or steak. But no more. I think it’s thanks to what I learned at Villa Manila in National City. Filipino eatery. I started changing my mind at one of their Kamayan evenings. That’s where everything is laid out on banana leaves so you can eat with your hands at the long table. “We mix sweet and savory,” said Diana the receptionist that night. “We don’t believe in savory first and sweet only for dessert.” And, against all the Sacred Writings of Cordon Bleu, by hokey, it worked. I learned to love the two together.

Salad’s good. Too much, of course. All that ham and sausage and cheese. Henry’s concentrating on his sandwich. “I’ve got to watch my carbs,” he says, “but I eat this every time.” Somehow, he manages to polish the whole danged ’wich off. Pity. I coulda gone a chunk or two.

Whatever, sigh. We both lean back sated, take in the heat, absorb the vitamin D from Huey.

Man, I’m so glad the guys here decided to bring their trouser legs out of Spring Valley for the rest of us to try.