Credit the acid, speed, and sunshine for helping to fuel his “spiritual search.” 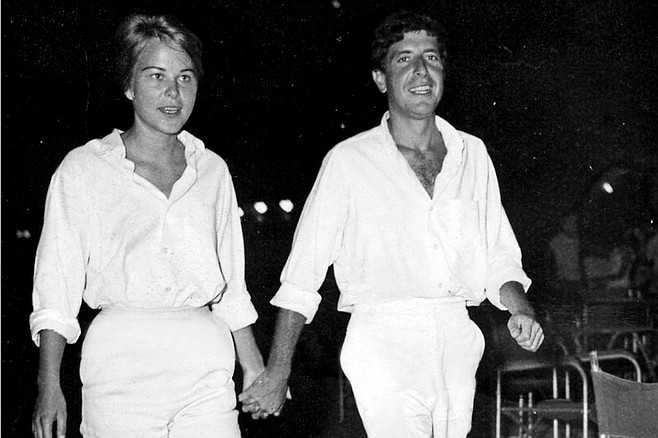 There’s no mention of Robert Altman’s breathtakingly grimy McCabe and Mrs. Miller in Nick Broomfield’s (Lily Tomlin, Heidi Fleiss: Hollywood Madam, Whitney: Can I Be Me) latest celebrity biodoc, Marianne and Leonard: Words of Love. For some, this may come as a surprise: Altman’s anti-western introduced legions of cinephiles to the music of Leonard Cohen. For a genre musically linked with Roy Rogers and the Sons of the Pioneers, the troubled, deep-set rhythmic cool in Cohen’s voice dashed all expectations of exactly what qualities a western score was supposed to possess. A pit-stop at the local record shop was in order.

Alas, in the eyes of the A&R division of Warner records, the three songs weren’t enough to justify a soundtrack; the helpful clerk handed me a copy of Songs of Leonard Cohen and sent me packing. It didn’t take long for the fascination to fade. Judy Collins once said of her friend, “People think Leonard is dark, but actually his sense of humor and his edge on the world is extremely light.” Maybe so, but Cohen’s songs grew to have the same effect on this listener’s ears as a single-edged razor blade would on his wrist. Still, McCabe and Mrs. Miller wouldn’t be the same without him.

And give him this much: he was a true original, which makes it even harder to reckon with the uninspired treatment his faithful chroniclers have afforded him at the multiplex. The last time we crossed paths was in Lian Lunson’s dutiful 2005 documentary, Leonard Cohen: I’m Your Man: your basic concert intercut with talking heads, archival footage, and home movies. For his part, Broomfield briefly touches on other areas of Cohen’s life, most notably his time spent in a monastery and his penchant for performing at mental institutions — the singer felt the patients would be empathetic to his music. But for the most part, Marianne and Leonard confines itself to the chapters in Cohen’s life dealing with his Norwegian muse, Marianne Ihlen. And it does so in yawn-inducing fashion.

It was the mid-‘60s, the era of free love, when Cohen and Ihlen met on the hedonistic isle of Hydra. She complained of being the only non-artist in the commune. Little did she know that her “art” was to be serving as Cohen’s muse. (She was the inspiration behind “So Long Marianne” and “Bird on a Wire.”) They spent their days acting the way lovers in paradise should: swimming in the Aegean, talking, drinking, listening to music, and making love. And writing. Besides the muse, credit the acid, speed, and sunshine for helping to fuel his “spiritual search.” Cohen, hard at work on his first novel, was easily reaching his self-imposed three-pages-per-day schedule.

Her first husband, Axel Jensen, displayed a violent temper without being physically abusive. So in the eyes of Ihlen, Cohen was a savior, but that too came at a price. When his novel tanked, it was Ihlen who paid the rent. Canadian Cohen wasn’t the type to set down stakes, choosing instead to split his time between Hydra and Montreal. Ihlen and her son followed Cohen to his Canadian home. Not surprisingly, what happened in Hydra didn’t happen in Montreal.

Ihlen described their relationship as two refugees running away from something they would inevitably have to deal with. One obstacle stood between Cohen and the road to musical immortality: once he overcame a fear of performing live, there would be bushels of money to be made off penning depressing ditties, and a cornucopia of impressionable muses to conquer.

The only thing more saddening than Cohen’s catalog is Landmark’s eagerness to turn its two remaining houses into big-screen extensions of the A&E Biography Channel. This year alone has seen Ask Dr. Ruth, Halston, Meeting Gorbachev, Echo in the Canyon, Framing John DeLorean, Toni Morrison: The Pieces I Am — and probably one or two others I’ve managed to forget. Coming soon: Mike Wallace is Here and David Crosby: Remember My Name. For the past two years, Landmark has stocked their screens with enough talking heads to fill Petco Park. A pox on vacuous celebrity docs! Tell me a story. Take me on a journey. In each case, the subjects have been of interest, the footage rare, and the stories compelling. What’s been lacking is the personal force and vision needed to make the leap to a work of art.

I remember when the Ken showed a different double feature every day. Miss those days. Oh well, at least its still open. The ONLY theater other than the La Paloma I consider a real movie theater in San Diego.

I get all misty-eyed for the days when the Ken's motto was, "If it's gay, it plays."

They did show Sauvage/Wild a few weeks back. The documentaries are a bit much I agree. I mean I like a good documentary every now and then, but the subject matter has to hold my interest, and I need something other than documentaries. Anywho they are going to show a couple of films I'm looking forward to in the near future. Mean Streets and Piranhas.

It's not that subject matter that I worry about, it's a filmmaker's ability to bring a degree of narrative storytelling to their investigative accounts. Most of these celeb docs would play just as well on TV and in some extreme cases, radio.

Who knew Leonard Cohen's music was the soundtrack for "McCabe and Mrs. Miller?" I also didn't remember it was a Robert Altman film. I had to buy a CD replacement for my old DVD of that gorgeous, romantic, tragic movie with Warren Beattie as schlepper and Julie Christie as the opium-smoking bordello madam in a muddy new town being built in the snowy Oregon woods. No wonder it was so great. Thanks, Scott.

Any time that I can be of help, just holler.