The curve of death at El Mirador

"That July 13 morning was extremely foggy" 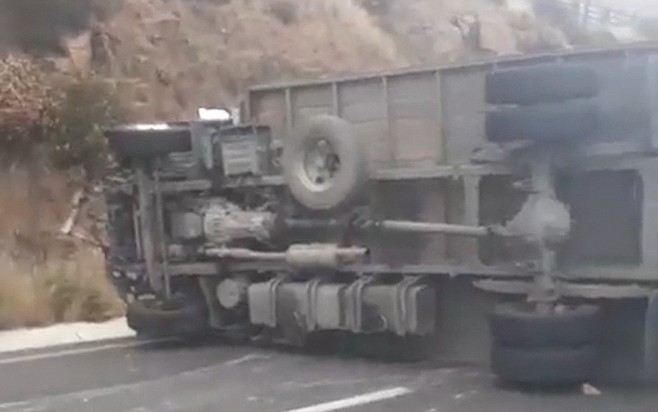 In the last week, videos and photos surfaced of truck drivers that lost control by El Mirador, between the Rosarito and Ensenada toll booths — backing up north- and south-bound traffic on the four-lane Mexican Federal Highway 1D. 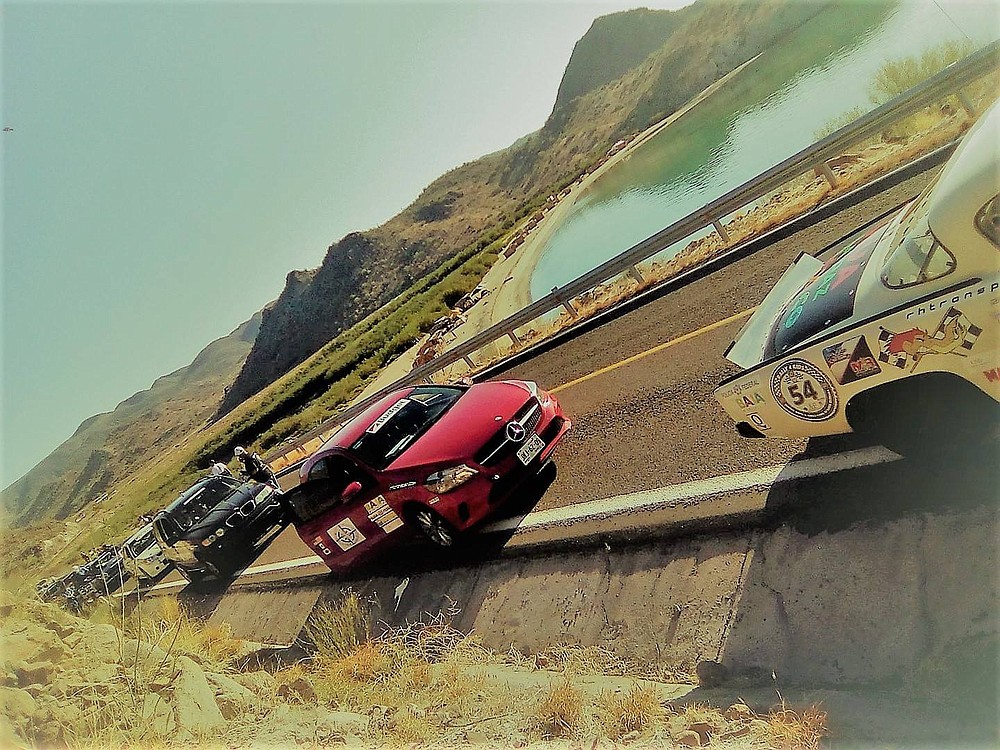 The Rally Historico Transpeninsular, a 1000-mile road race that starts in Ensenada.

El Mirador translates to “the lookout” and is located on KM 85 where there are rest area-looking structures that are usually lined with street and sidewalk vendors; tourists are known to pull over here to take selfies and photos of the Pacific Ocean, Ensenada coastline, and Todos Santos Island. On the morning of July 17, a woman pulled over past the lookout point to take video of a “tire delivery” truck that just rolled over on the southbound highway lanes.

“Some people come off the straightaway approaching the curve doing 70-80 mph,” said Tony R. “They slow to about 60 mph, to go through a curve designed for 45 mph …. and if you’re a good driver there’s no problem. But if there is a car or truck in the lane beside you, it may swerve across the line into the next lane; I’ve been squeezed like this before.”

I interviewed Tony on July 20. He’s an American that lives in Ensenada for the summer and regularly drives the 60-mile scenic cuota tolls roads between Playas de Tijuana and Ensenada; less than a week before, he witnessed an aftermath of an accident by El Mirador.

“On Saturday morning I came across an accident in roughly the same area heading north,” he said. “It was surreal because the scene unfolded slowly around the curve: first I saw a rock and a 6 liter water bottle in the right lane (to warn oncoming drivers to switch lanes); then I saw the guy waving his arms and then the overturned car; at the end of the curve was a bus and passengers at the side of the road.” 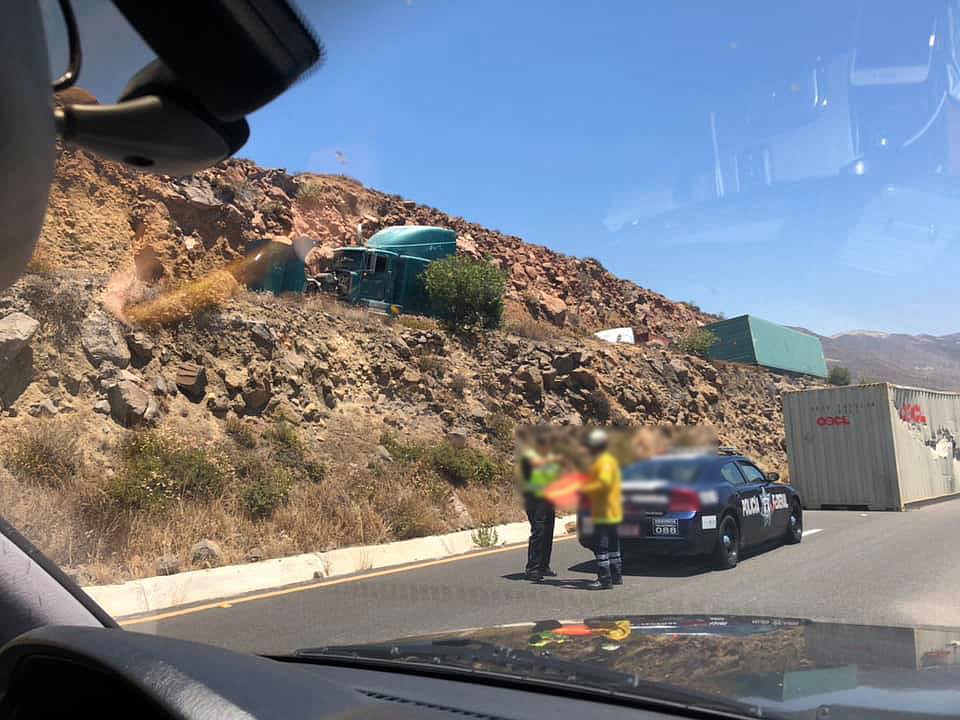 On July 19, south of where Vargas-Valdez broke down, a semi truck lost control on the toll road (by Salsipuedes).

As in the July 17 overturned truck video posted, “that July 13 morning was extremely foggy,” Tony explained. “And the thing about the fog is that it comes in pockets: you go through light fog into heavy fog all along the road. It makes sense to adjust your speed to the conditions, but some people don’t bother to slow down as if it were the Autobahn — I drove with hazard lights to prevent getting rammed from behind.”

“It’s right after the off ramp to El Mirador, Mike,” said Pedro Vargas-Valdez. “There is a radar speed sign that displays your speed as you enter that section to give you heads up on what’s coming. We call it “La curva de la muerte” (the curve of death).”

Vargas-Valdez is an architect by trade from Tijuana. He’s a track and off-road racer and race promoter that studies roadways and racecourses in advance for his events. Two years ago, I reported about his Rally Historico Transpeninsular, a 1000-mile road race that started in Ensenada, transversed down Highway 1, and checker-flagged at Cabo San Lucas.

“It’s a nasty one,” he commented about the “death curve.” “It’s off camber and variable radius, and it’ll spit you out if you overestimate your driving skill set.

“That curve has a concrete barrier about six feet tall and two foot thick. Before it was built, they pulled 600-plus wrecks from that ravine. I got the info from a federal policeman. Remember, this road was built in 1973 and that’s an average one wreck a month.” 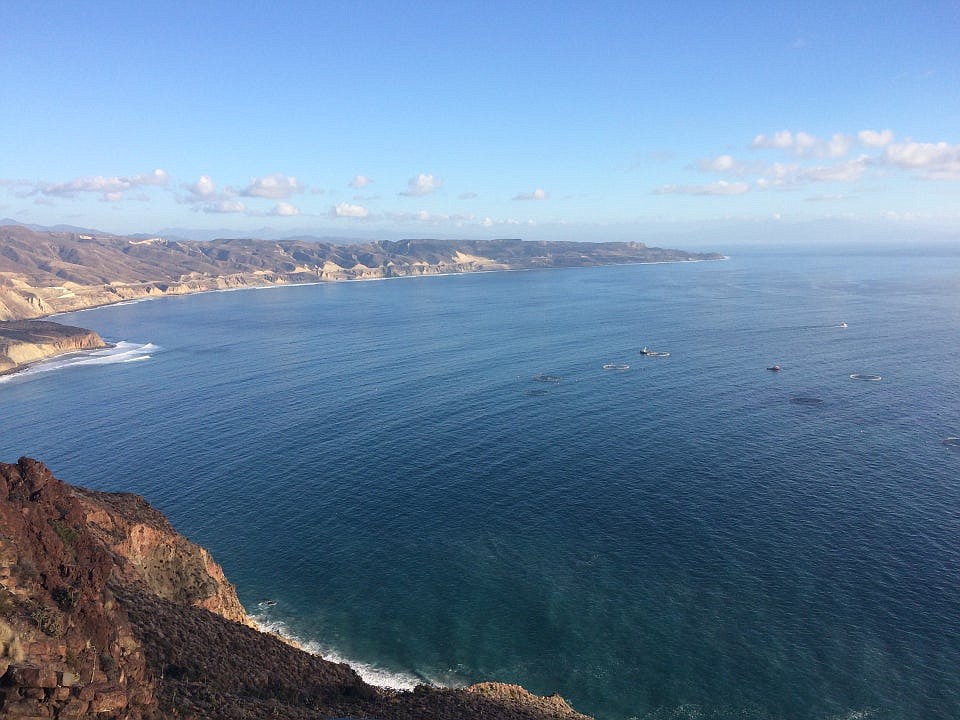 El Mirador – tourists are known to pull over here to take selfies.

“What year did they put up that barrier?” I asked; “Last year,” he responded. “It’s a dual ratio turn that throws you off if you come in too hot or are not paying attention.”

Shortly after Andrés Manuel López Obrador (AMLO) became president of Mexico in December 2018, the Tijuana, Rosarito and Ensenada toll booths were vacated and travelers no longer had/have to pay the $1-and-change per toll section. Many Americans traveling down into Baja are confused when approaching the toll booths that are now being used by solicitors to request for donations towards the organizations they allegedly collect for.

“You don’t have to pay them anything,” said Miguel who lives in San Diego and regularly visits his relatives and friends in Ensenada. “I mean, you can give them money, but you truly don’t know where that donation is going. At least when we paid the tolls, we were covered on the freeways if our cars broke down or got into a wreck (via insurance covered by the toll payment as stated on the rear of the paper receipts given out).”

“I don’t notice much difference in the toll road since they stopped charging a fee,” Tony said. “It is still clean and there are still federal police patrolling. Someone did mention something about insurance, though; I guess the fee we used to pay acted as an insurance policy should you have an accident while on the toll road.”

“The toll road services are still operational, regardless of the political changes on the toll road,” Vargas-Valdez reassured us. “I recently had mechanical issues with my car on KM 72 by Bajamar; I called the emergency number and within 40 minutes was towed to the toll booth in Ensenada. The tow truck operator said they are on duty as always, and being paid as usual. Same for ambulance and other maintenance services. How long will this continue remains to be seen.”

On July 19, south of where Vargas-Valdez just broke down, a semi truck lost control heading northbound on the toll road (by Salsipuedes) and was barely “hanging off the median” when a photo was taken and posted on Facebook. The conex box appeared to have fallen off of the trailer and rolled down an embankment onto the the southbound toll road — a Policía Federal officer was on the scene.

Thanks to NAFTA many of these trucks are headed for American roads. If they are involved in a crash the victims have little recourse. The Mexican trucking company just changes names and keeps on truckin'. The rules on hours of service that apply to American & Canadian truckers do not apply to Mexican truckers. Their hours of service start at the border. They may have been driving for many hours before they reach the border. American truckers can not drive into Mexico like they can into Canada.

This is just another case of crappy Mexican highway construction, and lead-footed drivers who have little regard for themselves or for others. Any of the drivers who have traveled that stretch of highway should know better. So, the question is if they care about what happens. The highway authority could fix the bad parts of the highway, and put some ominous signs on the rest, but they don't. Why? It's all about money, and the perpetual excuse in Baja and the other states is that the don' have the dinero, and that's the end of it.

Same here. The politicos are always at the trough asking for more money.