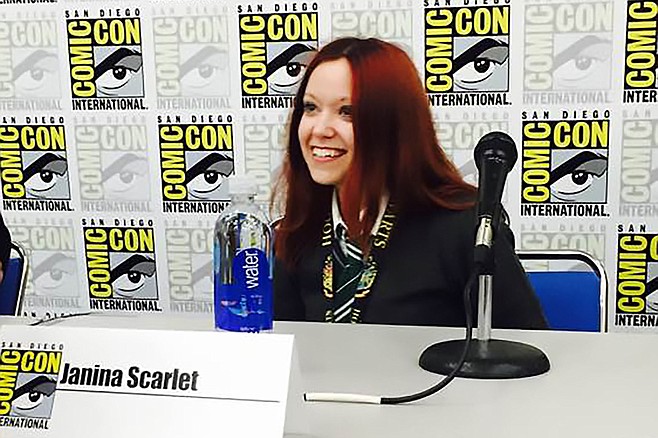 “Janina Scarlet is a real-life superhero with an origin story to rival any Marvel character. After surviving a childhood radiation spill [at Chernobyl], she moved halfway around the earth [to San Diego], overcame PTSD and chronic pain, and reinvented herself as one of the world’s most creative and innovative clinical psychologists.” — Jane McGonigal, video game designer and creator of the SuperBetter resilience-building app, in her blurb for Scarlet’s book Superhero Therapy: Mindfulness Skills to Help Teens & Young Adults Deal with Anxiety, Depression, and Trauma.

“I was doing my post-doctoral training at Camp Pendleton, working with active-duty Marines with PTSD,” says Janina Scarlet of Superhero Therapy’s beginnings. “Many of my patients struggled when talking about their emotional experiences — but they could easily talk about the emotional experiences of their favorite superheroes: Batman, Wolverine. They would bring it up. They might mention that they witnessed their best friend getting blown up in front of them. I would ask them to describe that experience, and they would say, ‘You know how Batman felt, right? When he saw his parents getting killed right in front of him? How awful and horrifying it was? That’s what it felt like.’ It wasn’t that they didn’t understand what it was like to suffer or what it meant to have depression; it was that they had a hard time talking about it when it came to themselves. I saw that these examples were necessary for them to feel supported and understood, so I started incorporating them into therapy with clients.” She found the superhero template helped patients feel safer practicing the skills she advocated — “there was almost this element of superhero training.” 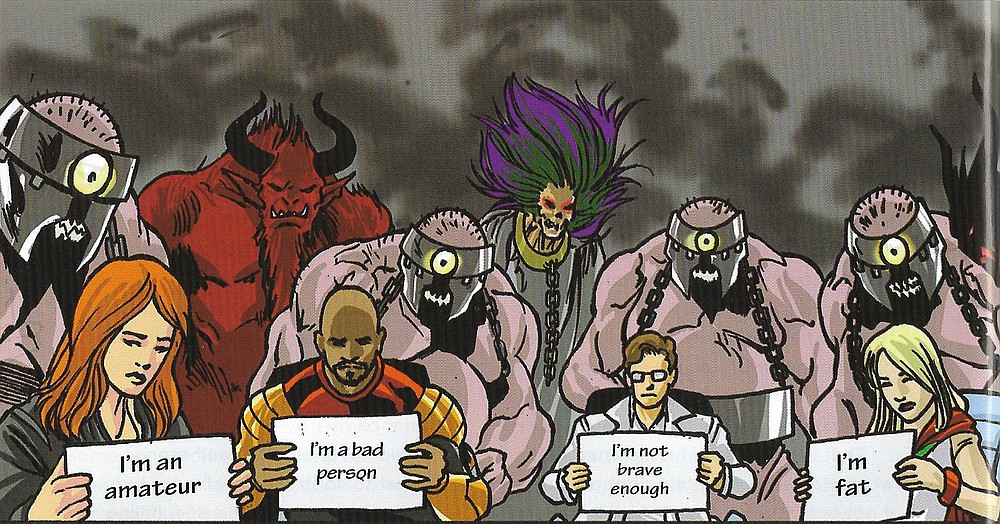 From the book: Shame, “an underlying core mechanism for most mental-health disorders,” haunts our heroes as anger, anxiety, and depression loom in the background.

The book that eventually resulted from her approach is rooted in Acceptance and Commitment Therapy, a methodology designed to engage various monsters — anxiety, shame, anger, and depression, to name a few — and to defeat a particular supervillain: avoidance. Chapter 2 is titled, bluntly, “Avoiding the Monsters Makes Them Stronger.” “The idea is that every once in a while, it might be necessary to hide out and take some time off to recover our strength, but completely running away from our own experiences and core values and sense of purpose can make life less meaningful. Someone running away from pain might get caught up in substance abuse as a way of reducing pain, trying to survive. That’s understandable, but they can get so caught up in that cycle that their life becomes unbearable.” Hero training is about learning to stand and fight.

This may sound strange. Retreating into a fantasy world of superheroes and monsters may sound like precisely the avoidance Scarlet’s patients need to conquer. Put another way: how is deflecting your own pain onto young Bruce Wayne a way of standing and fighting? Scarlet answers that, for starters, this isn’t exactly a new idea. “We have stories that are thousands of years old that can help us understand our own experiences and that create examples on how to handle situations. The Odyssey, for example, might show us how after a war, somebody’s internal war may not be over. They might experience trauma that leads to suicidal thoughts. These old stories are still relevant. And I think engaging in telling and retelling your own story can be therapeutic for a lot of people.” 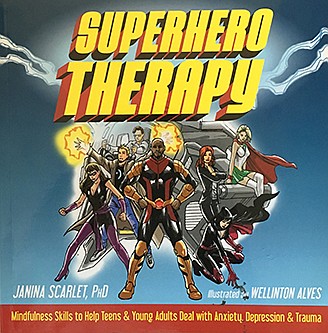 But beyond that, “Sometimes, fiction tells more truth than reality. A lot of times in our everyday interactions, we actually hide behind certain masks, behind expectations of being ‘fine.’ We are expected not to show our vulnerabilities and struggle, to always have a good day. That’s not realistic, and I think that the real world can, in a lot of ways, be deceitful or unrealistic as far as the social expectations that are put on us. Whereas in those alternate realities, we have permission to be to be real. In the fictional world, the hero is allowed to struggle. The hero might even be perceived as endearing or wonderful for having undergone something really painful and survived. That allows readers — or viewers, or users, or players — permission to engage with one another and themselves when it comes to exploring their own mental health.”

Finally, fictional worlds “also give a sense of vocabulary to people who have never learned to label their emotions accurately. Harry Potter readers might talk about their depression as Dementors. Lord of the Rings fans might talk about their greatest fears as Nazgul.” And the recognition that comes with naming is crucial to Scarlet’s approach. Consider Shame, who appears in the book’s illustrations (by comic pro Wellington Alves) as a grotesque pinkish hulk, his head bowed by chains, his face hidden except for a single staring eye. “Most people don’t even realize that they’re experiencing shame. They might notice anxiety or anger, but not shame, which is an underlying core mechanism for most mental health disorders. And if we can notice our internal sensations and experiences — ‘Oh, I’m having an anxious moment’ — without judging them, we can reduce shame over time.”

The book follows six heroes whose ability to do hero work has been compromised by this or that internal struggle. Former soldier Drovin recalls killing civilians in the wake of seeing his best friend cut to pieces by lasers. Now he’s beset by explosive anger, along with the conviction that he’s evil and deserves whatever unhappiness befalls him. (He sounds not a little like one of Scarlet’s PTSD vets, and small wonder: all six heroes are based on former patients.) Now at the Superhero Academy, he practices Defusing Charms and prepares to take up the Sword of Willingness.

As McGonigal mentioned, Scarlet knows whereof she speaks. By her own account, Chernobyl gave her the excruciating personal experience so many superheroes must transform into motivation. (Think Peter Parker standing over the body of his murdered Uncle Ben.) She’s plagued by worst-case scenario thinking (10 catastrophizing thoughts per day). And writing Superhero Therapy required her to overcome the self-story that she is, at heart, an amateur. But eventually, she attended her own Academy, engaged her own demons, and emerged triumphant — and published.