The Magnificent sleaziness of Miss Kim’s by That Boy Good

The tenderness gets me first, then the flavor. 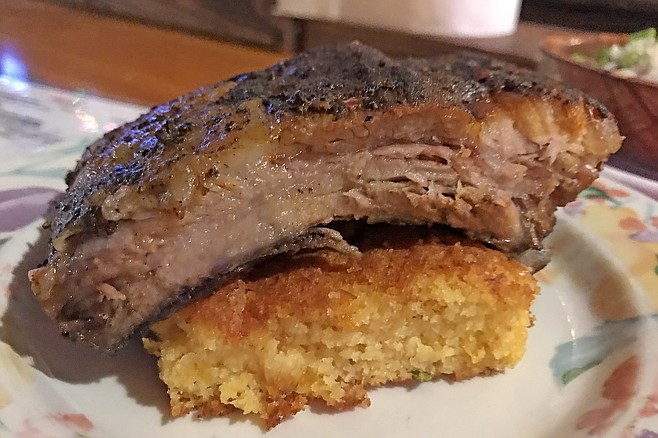 Oceanside’s jamming tonight. Everybody’s out and about. This is Friday, around eight. “Jesus saves!” yells this kid. He’s not alone. A whole bunch of them are making a hullabaloo in the plaza outside the Regal Cinemas on Mission Avenue.

“Come, man. Come to Jesus. He saved my life,” says the kid. He hands me a flier. “Victory Outreach Oceanside. Bible Study. Join us every Tuesday evening.”

Right now, I just have time to catch a bite somewhere before the last Coaster train of the night heads back to Diego.

Outside says it all

I start up Mission and turn off onto North Coast Highway. I’ve spotted a sign outside a yellow and brown stucco frontage. “Miss Kim’s.” Looks like a great old dive bar. Actually it says in small print, “Miss Kim’s by That Boy Good.” Elsewhere it says just TBG. It also says, “Juke Joint.” And “Southern BBQ Joint.” Confusing blizzard of names. But the main one, painted in big letters on the stucco, gives it to you straight. “BBQ and Cold Beer.”

Good enough. I head in through the saloon-style flap doors. Yuppy-looking group ahead spend a moment glancing around at the two low-light bars, the juke box, the magnificent sleaziness, and turn round. “Maybe not,” says one of the girls. 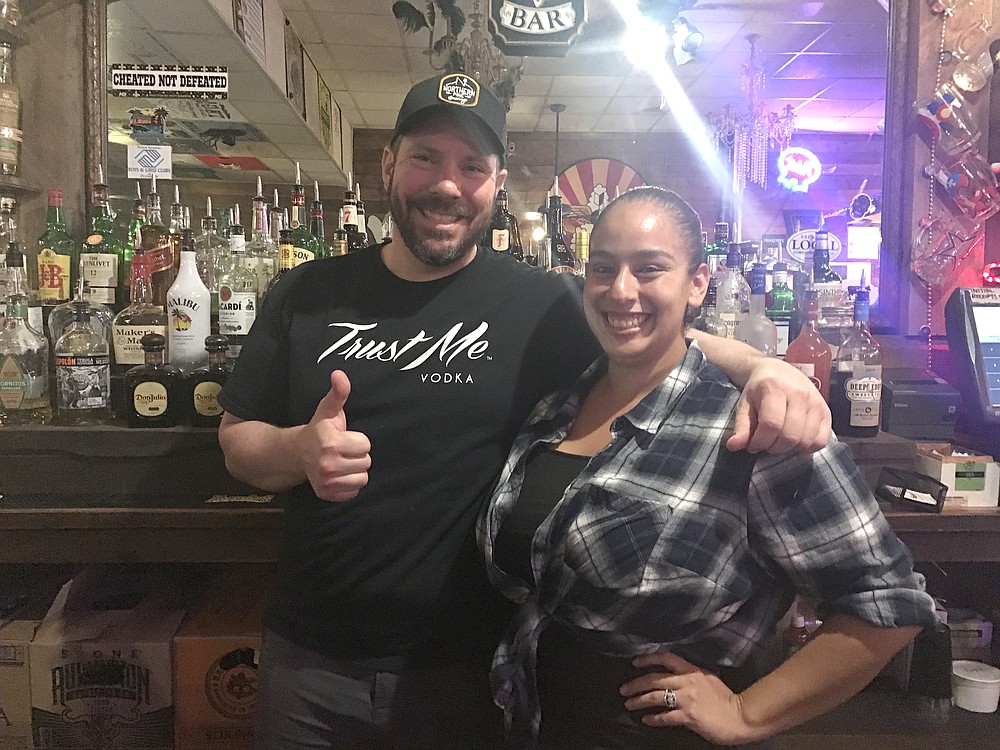 The gal at the welcome desk leads me through to the back bar. So many jokes and posters to read on the walls. “Beer. The main reason I wake up every afternoon.” “Wine. How classy people get wasted.” ‘I like my fries dirty and my tea sweet.” “Where there’s smoke there’s food.” And a whole lot more Southern BBQ bon mots. I swing onto a stool and look around. The varnished timber bar is beautiful in itself. “It’s beetle-kill pinewood. From trees that the beetles killed,” says the barkeep, Matt. General Manager, too. And yes, there is a real Miss Kim, and That Boy Good is Mark, the chef, and her husband. They’re characters. Made this what it is. “That Boy Good” is southern for good food and good music.

I look around. It’s woody and unpainted. Feels kinda Wild West. The ceiling’s loaded with logos. Seems businesses pay for a ceiling tile for good causes.

The brightest logo’s on the left wall, gold on black. The fleur de lis of the New Orleans Saints. On top, it says “Who Dat?” And not far from it, a bumper sticker. “Cheated, not defeated.” Oh. Right. The Rams game. 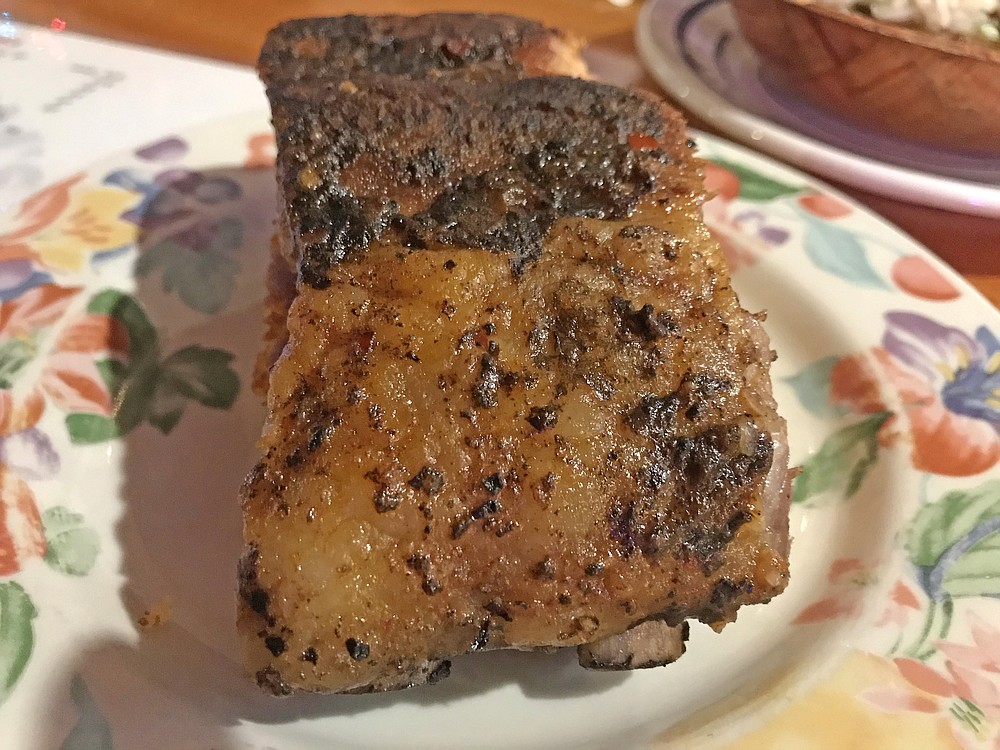 Luscious skin. Four hours in the smoker will do that

I order a Lost Abbey sour beer ($6), and check out the menu. First thing you realize is we’re definitely talking Deep South. Gumbo, catfish, pulled pork, cornbread, the whole shamazz. Just the “TBG Favorites” give you an idea. Chicken thighs and waffles, plus fries, go for $15. Cornmeal-crusted delta catfish with fries and cole slaw is also $15. Dirty Fries, with mac and cheese sauce, BBQ sauce and fresh jalapeños costs $11.50 with pulled pork, $12.50 with beef links, and $13.50 with brisket.

If you have the cash and want to go the full monty, the BBQ combo platter tops the charts with beef links, pulled pork, and half a rack of ribs, for $30. This includes “Miss Lequita’s cornbread” and one large, or two small sides, things such as collard greens, smoked beans, house salad.

So I’m relieved to see there are deals. Stick with the starters and you won’t go broke. The shrimp and sausage gumbo bowl goes for $7 (or $12 large). “Beanies and Weanies” are $8, and popcorn shrimp, catfish strips, or country fried chicken thigh and waffle, each go for $7. And this looks really wicked delicious: Crossroads Cup, smoked beans, mac’n cheese, a choice of meat, and slaw. With pulled pork, this is $9.50; with beef links, $10.50, and brisket, a buck more. 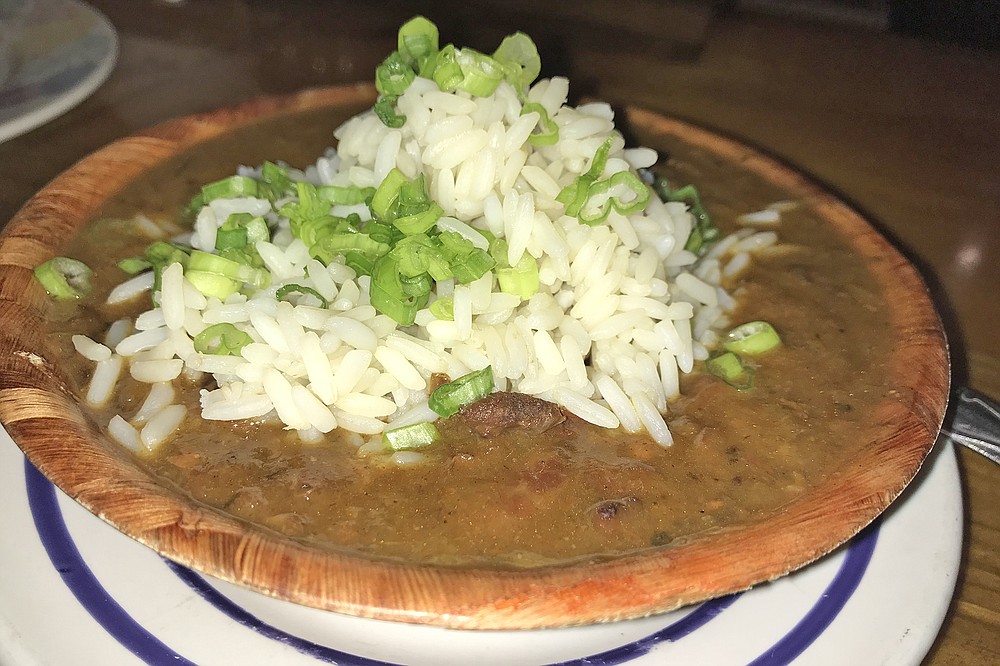 Guy on the stool next to me’s ordering dirty fries with pulled pork.

“Our most popular item,” says Matt.

The prize for best bang for the buck has to go to the last starter: BBQ ribs by the bone, two pork ribs sitting on top of a slab of cornbread. Cost, $5. Five buckeroos!

Natch, I have to order that, plus I get the small gumbo bowl too.

Matt brings them all out lickety-split. I suddenly realize, we’re getting near to nine, closing time. The gumbo is great, with a pile of white rice and green onions on top. And you get bits of shrimp and sausage popping up. Almost enough for a meal. My only problem: it’s a little salty for my tastes. 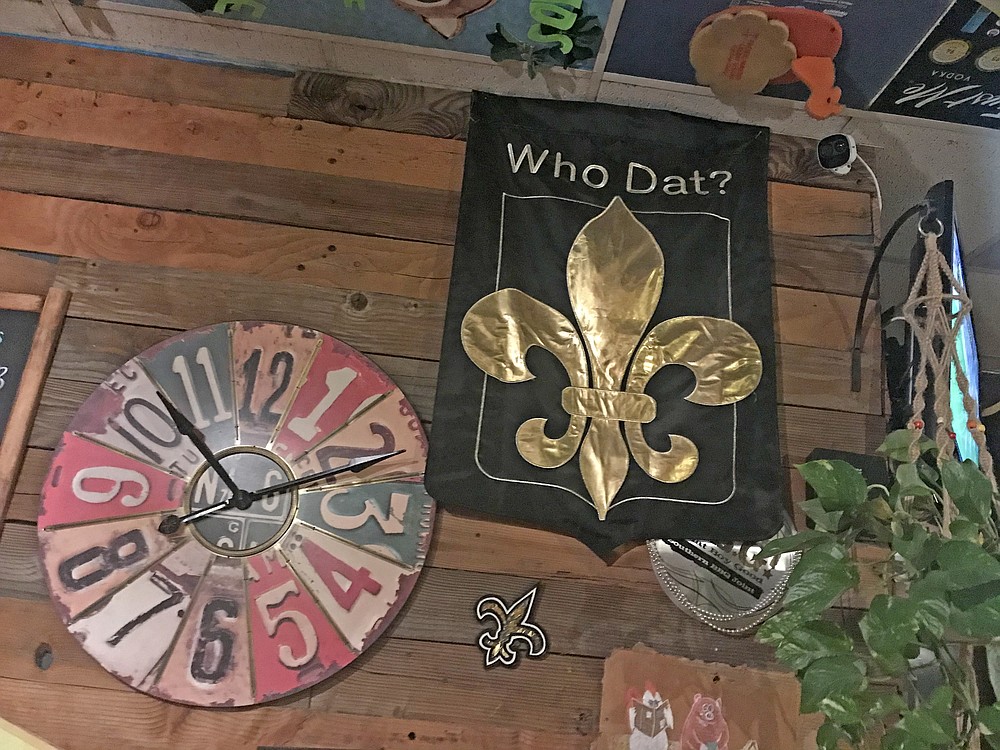 But the ribs and cornbread hit the spot. Totally tasty, and the beautiful, crunchy cornbread adds sass. The pork is fall-off-the-bone tender, with a nice gentle savory flavor. “We BBQ it out back on mesquite and applewood, for four hours at 225 degrees,” Matt says, “then put it in a steam vat to keep it moist. We do maybe 100 racks a day.”

The tenderness gets me first, then the flavor, and then, well, the cost. These are filling and they cost $5. Go figure.

“You should come Sundays,” Lenae the hostess says. “We have a BBQ Bloody Mary. That’s a big Bloody Mary with ribs lying across the glass’s rim. Nine dollars.”

Oops. Have to fly. That last Coaster. Pulls out at 9:56. I run all the way, haul aboard heaving. But was it worth it? Oh yes. As they say, that boy good.