Slide show at Fairmount and University 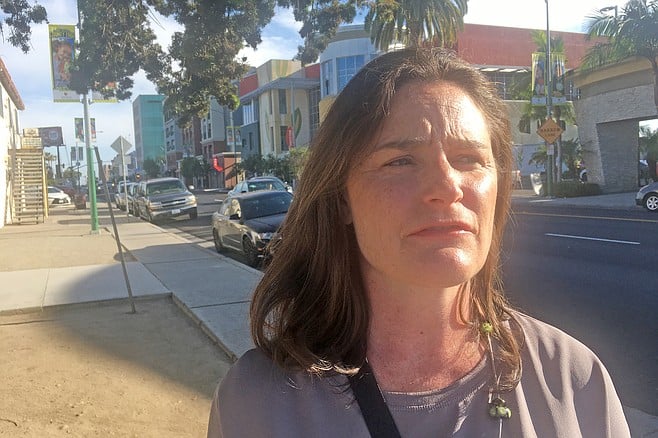 If your apartment’s plumbing won’t stop backing up, your landlord is abusive, or you’re stuck with a troublesome tenant in a modest rental unit you’ve managed to buy, you may already know Ted Janowsky or Becky Levine.

“We work with the very large East African population in City Heights,” says Levine, a supervising attorney at California Western School of Law’s Community Law Project. “There’s also the Karen community from Burma who we work with, as well as refugees from other areas of Africa — of course the Somali community and Sudanese are also part of our program — and we help people from Guatemala and parts of Central America and Mexico.” 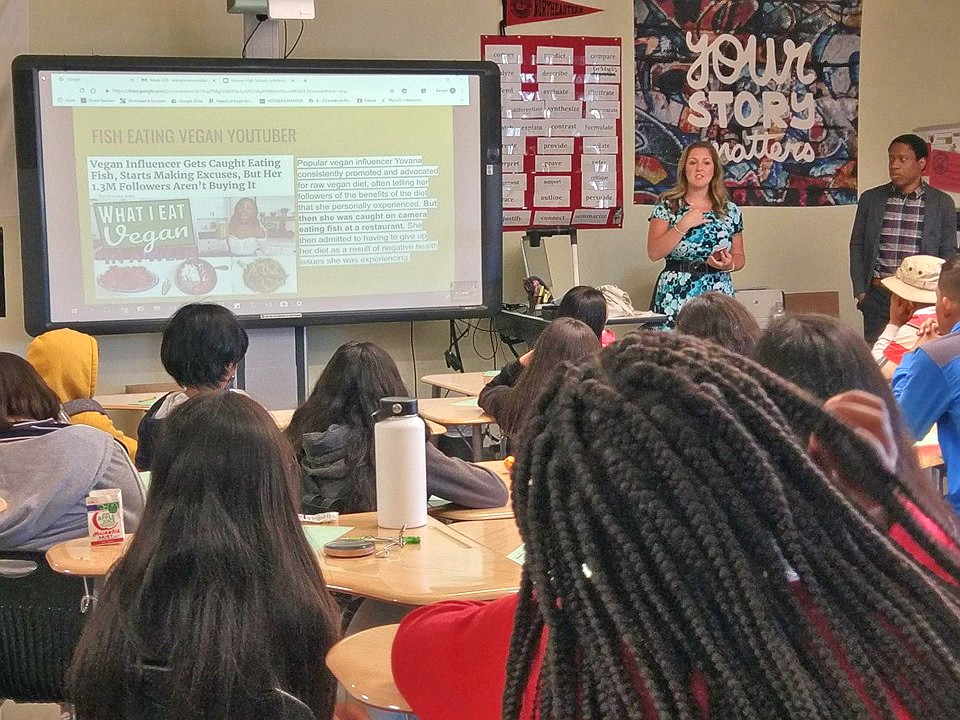 The Community Law Project recently held a legal clinic at a local high school which they didn’t want identified.

Focusing in part by design on refugee communities, Community Law Project ensures renters have an understanding of their rights and responsibilities under the law. The work begins by reaching out to organizations — many religious, some secular — within immigrant and refugee communities to find where and what legal issues are hurting newcomers to San Diego. A frequently treacherous rental market even for native-born renters, the local rental arena is a place where landlords are generally believed to rule.

San Diego’s Sudanese, Somali, Haitian, Central American, and other communities are constantly re-infused with fresh arrivals. Says Ted Janowsky, one of Community Law Project’s supervising attorneys, it’s only by building trust with leaders inside those communities that the Tenants Rights and Responsibilities program can be effective.

“That’s not as easy as it may sound, as we’re finding out,” says Janowsky.

People seeking refuge and new beginnings for their families hear and see the same news as do people who were born in the U.S. They worry that, to some native-born Americans, people like them are less welcome today than they might have been in decades past.

While that news scares them, at the same time it also makes their community leaders fiercely protective of new arrivals — not only in regard to potentially abusive landlords, but lawyers and law students who want to help them, and — as I learned — the media.

“One of the biggest challenges we face in helping people with their legal rights is not that they don’t understand their rights, but that they have a fear of even asserting them,” Levine says. “We often hear about problem a family is having with their landlord, and we’ll see the solution. Maybe it’s simply a matter of writing a letter on their behalf; but many times we’ll hear, ‘No, I don’t want to do that, because I fear I will be kicked out and I won’t be able find another home.’”

Given the difficulty of helping immigrant and refugee communities, why don’t Janowsky, Levine, and their team of California Western law students simply focus on serving non-refugee communities in need? The answer to that question could be filed under, “to the mission be true.”

Janowsky and Levine met me at a community center in City Heights recently. (They asked me not to say which one.) The idea was for me to interview some of those vulnerable people. At this particular iteration of the renter’s-rights clinic, they were mostly people originally from a country in East Africa. (Again, I was asked not the say which.) After surviving lifetimes in a region ravaged by war, famine, and terrorism, they’re now navigating problems with their landlords or prospective landlords.

Community Law Project’s new clients gathered on a hot, June day to get legal advice, but they didn’t know there would be a reporter there. I looked forward to meeting some of them. Maybe I’d be able to shoot some photos, which given the beautiful, traditional clothing some wore, might have made for a lovely layout. I’d also have a chance to chat with some of the second-year law students Levine and Janowsky oversee as they consult with their refugee and immigrant clients.

But with a couple of texts messages, I found myself facing the same quandary the attorneys of California Western School of Law’s Community Law Project say they’ve been experiencing lately when taking their legal clinics out into the community. Immigrants not only fear landlords, they worry about having their voices amplified by lawyers and in the media.

“I’m sorry you came all this way,” Levine, who has come out of the building where tonight’s clinic is set to happen, explains. “But I can’t have you come in. They don’t feel safe having the media here.”

So I stand outside. One by one, I interview the attorneys and their interns. First up is a second-year law student named Shyam Patel.

“It’s just kind of shocking how some landlords take advantage of people who can’t speak, read, or write English and rush them into signing an agreement that binds them,” Patel says. “Rental applicants have the right to have a translator present. They’ve got to bring the translator — they can’t ask the landlord to provide one, but they have that right. If they’re talking in Spanish, then the landlord is obliged to provide a copy of the same agreement they’ve signed or will sign in Spanish.”

Asked if or how the current tone of public discourse impacts his ability to advise and advocate for clients at pop-up legal clinics like tonight’s, the future lawyer declines to comment.

“That’s a political issue, and I don’t want to go into that — respectfully,” Patel says. But he points out that his internship and the free legal services he, his supervising attorneys, and fellow law students provide fall under the description of advice rather than representation. “If we have a client who might need representation in court, if they’re being discriminated against, for instance, we might refer them to an attorney who might represent them pro bono. But as far as the Community Law Project, we’re just advising them, not representing them.”

Cameron Bell is a second-year student. A hot wind blows as we chat standing outside a nondescript building near Fairmount and University Avenues. I’m told that inside, Bell’s and Patel’s fellow students are watching, listening, and learning as Ted Janowsky presents to community members, a slide show and talk about tenants’ rights and responsibilities.

“I’ve been to about eight of these clinics since May,” Bell says. “It’s my first internship since coming out of my first year as a law student. I’m seeing a lot of housing issues and immigration issues in the consultations we do with the community members after the presentations.”

Though he hasn’t decided exactly what practice field he’ll specialize in once he graduates, the experience Bell is gaining has piqued his interest in housing law.

“Landlord-tenant law is very complicated, especially [if you’re] coming to the United States for the first time,” Bell says. “We try to provide the best advice we can. I think a lot of the people come out of the clinic feeling a lot better than they came in. It’s reassuring to know that we’re here for them.”

So sensitive are the their clients to perceived public animus toward immigrants, program attorneys asked that we don’t even identify from which East African country attendees of tonight’s clinic hail. Community Law Project’s relationship with the organization that helped organize the event is new.

“Even saying who our partner organization is would identify the name of the country and we’re trying establish trust,” one attorney said. “I think they feel a little surprised that we invited you here. That was an oversight; and we’re learning.”

Janowsky recalls a recent clinic to which came a frantic young Haitian couple with a brood of youngsters ranging in age from infancy to middle school. When he sat down with the family after a presentation, which was held at Hoover High School, it was clear overcoming the communication barrier would first happen through conversations among himself, the couple, and their English-speaking children.

“The parents spoke Creole,” Janowsky recalls. “They were distressed because they had received from their landlord a three-day notice to vacate. But they had literally just moved in days earlier after paying all of the move-in costs.”

After listening to the parents and their untrained interpreters (again, the couple’s children) Janowsky was eventually able to piece together the problem.

“There was just massive confusion,” he says. “They hadn’t been able to effectively communicate with the property management company. At first I couldn’t quite figure out what was going on. It was clear they’d paid the rent and the move-in costs, but yet they had this eviction notice for non-payment and a late fee.”

Finally, Janowsky found the missing piece of the puzzle. The family, having been given the keys and understanding the apartment was clean, unoccupied and ready for move-in. They thought they were simply taking care of business by moving in early — five days early.

The property management company, acting well within its rights, had simply billed the family on a pro-rata basis a charge for the additional time during which they had occupied the rental unit. When the family hadn’t paid that additional amount, the company tacked on an additional $100 late fee.

“I thought that was a little aggressive, but I don’t think the landlord was being nefarious,” Janowsky says. “Regardless, the family had no idea what was going on because of a language and perhaps a cultural barrier. It was just incredibly confusing to them. But when we finally sorted it all out, they understood; and they were fine with paying the additional rent.”

And, the landlord was willing to rescind the late fee, Janowsky says.

Employers and slumlords love these immigrants. They are easily intimidated and the employers and slumlords use their fear of authority to their advantage. San Diego is notorious for using immigrants, be they Mexican, Indian, or others to keep the service industry supplied with easily exploitable low wage no/low benefit workers. This lowers the wages and benefits for all hourly workers. Add to the mix the numbers of illegal immigrants in San Diego cause the employers and slumlords rejoice. They rely on the fact that many of the deplorable conditions and low wages that many of the immigrants face is far better than the poverty and desperation that they faced in their home country. Slumlords and employers rely on the largess of the religious community and various welfare programs to further bolster their profits.