No one has lived in this modern Mediterranean manse 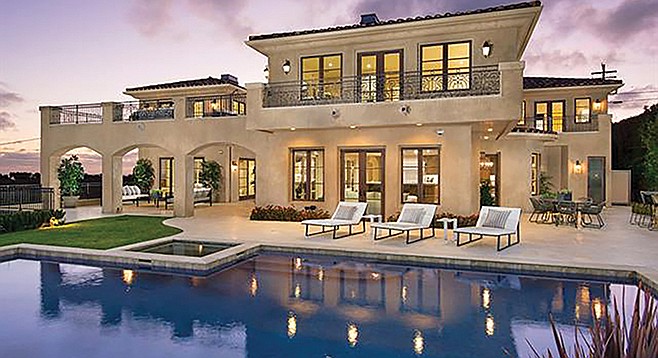 Listing materials for a recently-constructed southern La Jolla mansion pose a question they’re more than happy to answer. “What would you call a residence of high style, beauty, and sophistication, intelligent design and refined in every detail?”

“Nothing short of magnificent!”

Billed as “grand in scale, yet welcoming,” the home at 5811 Rutgers Road features six bedrooms along with ten full and half-baths spread across nearly 11,000 square feet of indoor living space. (That’s as stated in the listing; tax rolls more generously estimate the living area at 12,245 square feet). Built in 2017 in a Mediterranean style first popularized in California during the ascendancy of Hollywood as an entertainment mecca in the 1920s, the property still promises “a casual elegance perfect for today’s lifestyle.”

A southwesterly hillside location provides ocean views as well as city light vistas spanning Pacific Beach, Mission Bay, and Point Loma from the home’s perch a bit less than a mile east of Bird Rock. The “phenomenal” master retreat, with its 450-square-foot bedroom area, “exquisite bathroom” and a “huge view balcony” are poised to take full advantage of those views from the home’s second story.

Outside, “impressive curb appeal sets the tone for this palatial estate” with a wrought iron gated entryway, semicircular drive, covered entry and garage with three wood-paneled roll-up doors. The grounds, comprising just shy of an acre, are fully landscaped save for the black-bottomed pool and spa, backyard patio, and a center courtyard offering an al fresco dining alternative. 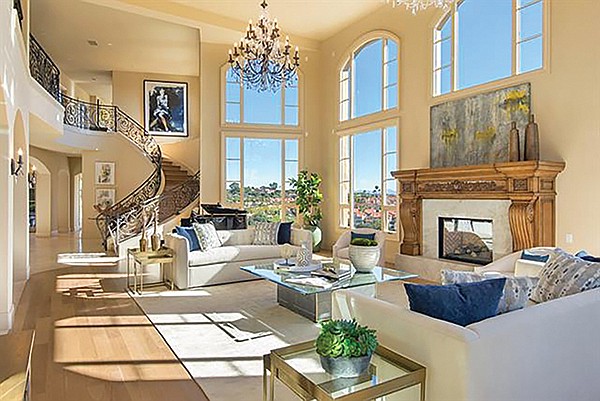 One of the four “substantial living areas.”

Inside the home boasts “four substantial living areas, each with its own personality,” along with a “spectacular family kitchen which is part of the huge great room where friends and family gather.” A home theater offers leather recliners to seat 17. And there’s an office, a parlor, and a refrigerated wine room. An elevator offers an alternative to stairs for passage between the upper and lower levels, but two laundry rooms means never having to lug a basket up or down anyway.

Separate guest quarters include a bedroom suite, private living and dining rooms, and a separate kitchen.

Although complete for more than a year, the Rutgers estate has never been lived in. Its owner, Ralph Bwy, is a developer who purchased the property in 2008 for $2.2 million and tore down an existing one-owner 1960s ranch-style to make way for the new property. Bwy has kept a fairly low profile, but in a 2004 report covering residents displeased about an upcoming condo conversion during the height of the early-aughts housing bubble, his son Chris rightly observed that “The tenants will never have a better chance to buy. Lenders are giving money away.”

That the La Jolla residence has no resident isn’t for a lack of trying. The home was first listed for sale in June 2018 with an asking price of $10,800,000; the cost briefly jumped by $90,000 but had fallen to $9.5 million by the time the listing expired in December. A new listing went live in early January, with the price further reduced to $8,800,000.