Women's March and Walk for Life – a mile or a world apart? 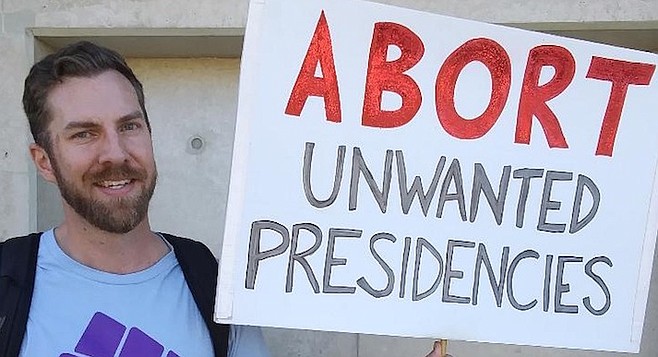 Two events drew out civic exhibitionists in San Diego on Saturday, January 19, each expressing a different view about what it means to be pro-woman. 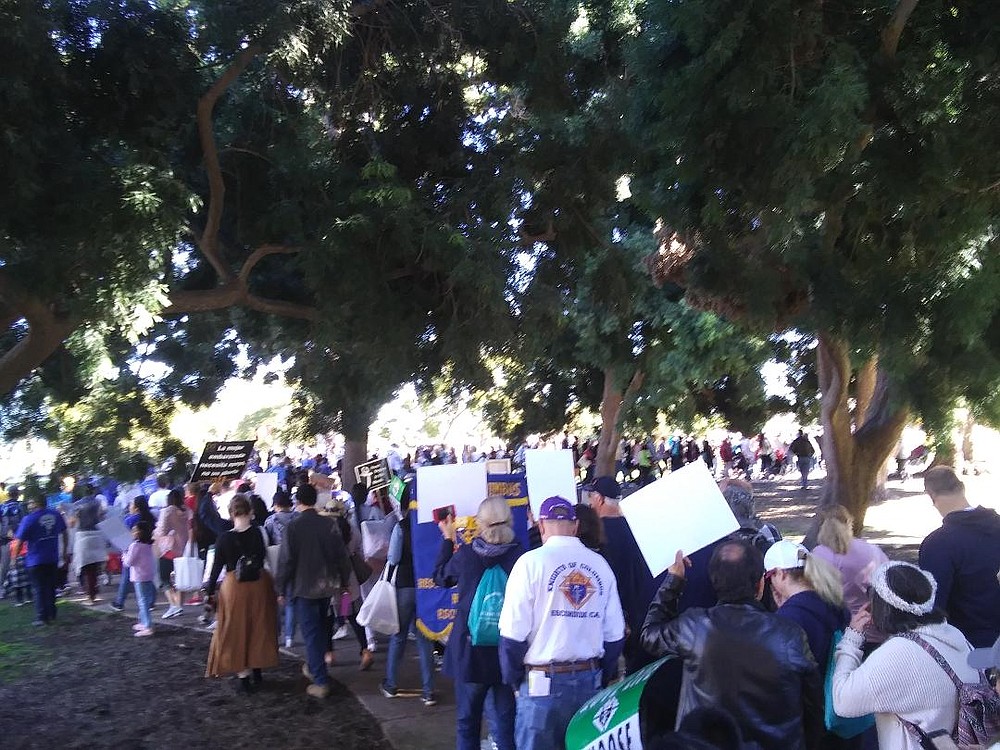 Walk for Life in Balboa Park

An estimated 20,000 participants in the Women’s March gathered at Waterfront Park to express their viewpoints and listen to speeches. From there they marched south on Harbor Drive alongside the bay, turned around near Seaport Village and returned to the park via Pacific Highway.

A mile uphill to the east an estimated 4,000 gathered among the trees of Balboa Park for the Walk for Life. 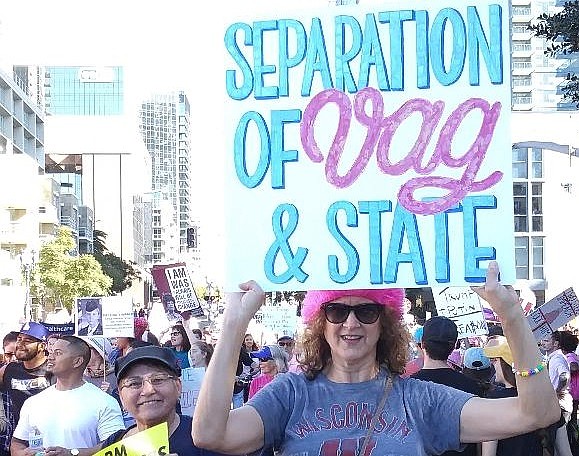 At 10:40 am (1.5 hours before the March) the Walk marchers started at the northeast corner of Sixth Avenue and Laurel Street and went north through a winding trail in the park. Just before Upas Street the crowd turned around and took the sidewalk along Sixth Avenue back to the staging area.

As they walked, the diverse group of women, men and children held signs in English and Spanish that read “choose life” or “elige la vida.” Some drivers passing by honked their horns in affirmation, others in disagreement. One driver stuck out her middle finger as she held down her horn. Walkers responded with smiles and waves. 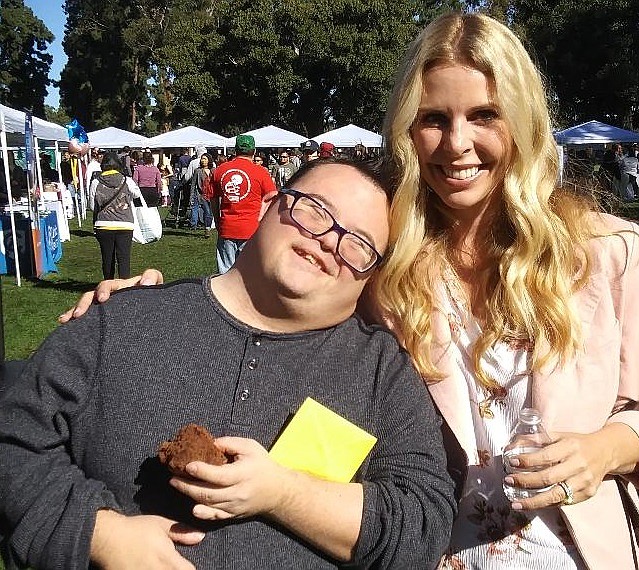 One couple wearing green and carrying green balloons held a green sign that read, “Down syndrome lives matter.” Equal rights for those with disabilities was the theme of this year’s Walk. The Center for Disease Control says Down syndrome is the most common chromosomal disorder and according to CBS News 67 percent of fetuses diagnosed with the disorder in the United States are aborted. In Iceland it’s 100 percent.

Ashlynn Harris spoke at the rally before the Walk about how three decades ago her parents looked for a baby with Down syndrome to adopt. She was born with spina bifida, another condition that often leads parents to choose abortion after a prenatal diagnosis. 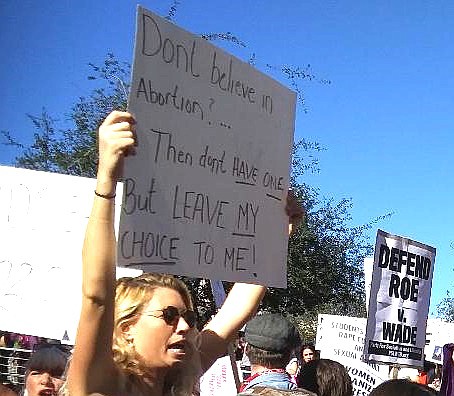 Her parents adopted her brother Caleb, who stood on stage with her. She talked about his job as a greeter at Johnny Rockets and how “people don’t go there for the fries and shakes. They go there for the person who greets them.”

Meanwhile, a crowd of women (with some men and few children) wearing pink “pussyhats,” pink Planned Parenthood shirts and holding pink signs surrounded the County Administration building at Waterfront Park for the rally before their march. The event was emceed by Nora E. Vargas, a Planned Parenthood vice president. (Planned Parenthood is the leading abortion provider in San Diego.) 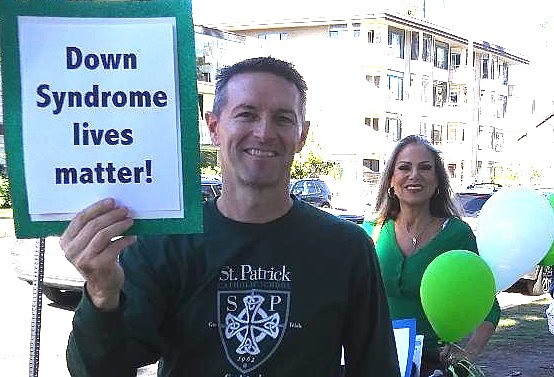 Bry told the crowd, “When it comes to our right to make choices about our bodies we will not be silent.” Gloria said he would stand against “attacks on choice.” 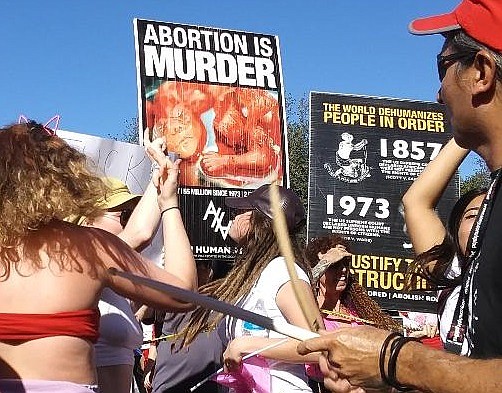 At the end of the march the diverse group of women (some dressed in Kumeyaay attire and others in Islamic garb) at the front of the procession turned off Pacific Highway onto Ash Street to make their way back into the park.

A look of surprise came over many of their faces when they were confronted by a small group of out-of-town pro-life activists on Ash Street displaying a large picture of a dismembered body and the words “Abortion is murder.” (No graphic signs were displayed at the Walk for Life.) 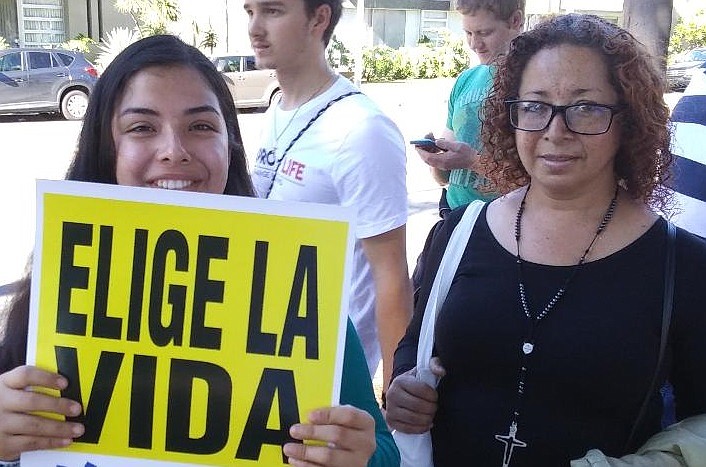 As the procession moved on, some of the marchers who came up later surrounded the small group, tried blocking their signs and drowned out what they were saying by yelling and blowing an air horn. One marcher set up his drum set in front of them and began playing. Then wave after wave of marchers chanted “My body, my choice!” as they passed by.

Another sign displayed by the pro-life group stated, “Equal rights for all humans.” A pro-choice marcher stood in front of it holding a sign that read, “Against abortion? Have a vasectomy.”

How many pro life people are willing to adopt unwanted children? They all seem to want to protect the unborn but abandon them after birth. While I am not pro abortion I am not for dictating to a woman what her reproductive rights are.

Tired, baseless argument. Life deserves to be protected. Abortion is not reproductive. Women are stronger than they've been convinced to believe.

It is not a baseless argument. If a woman is not allowed to make choices about her body then unwanted pregnancies will occur. The usual cadre of bible thumpers will rail against a woman's right to control her body but will not lift a single finger to care for and raise an unwanted child.

Alex Clarkkke from the Sign On San Diego, days, FALSE equivalency. Like the nativists who say "how many migrants are you willing to take in your house." Maybe enroll in Logic 101 at your local community college??? And people are ALWAYS making choices, like the tramp stamp your girl friend chose to get .

That woman giving the finger speaks volumes. You can tell what side she's on but it really doesn't matter. Says more about her.