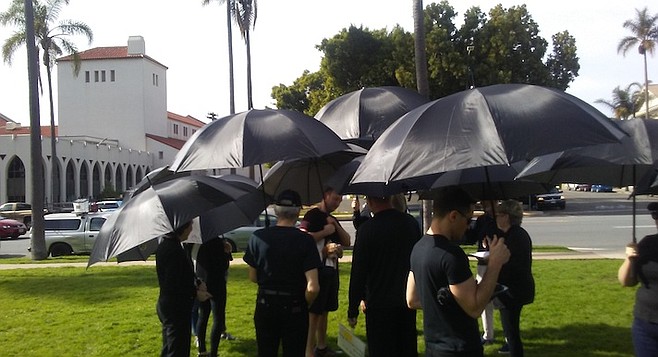 Nearly 100 people opened black umbrellas in western Balboa Park on Sunday to demonstrate how far the shadow from a project will fall and darken the park.

“This is the early afternoon shadow,” said organizer Roy McMakin. “By late afternoon every day the shadow falls into the canyon where the 163 goes.”

The group came together to protest Greystar Real Estate Partners’ plan to tear down 16 units of inexpensive rental apartments on the St. Paul’s Episcopal Church plot between 5th and 6th at Olive Street and build a 225-foot tall, 20-floor tower with 204 apartments – including 18 affordable units. 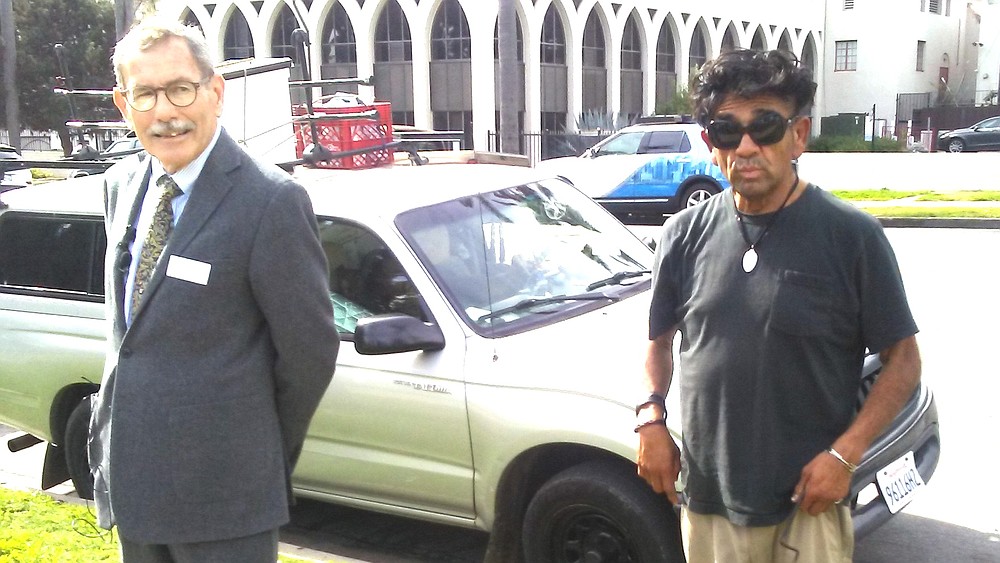 Mark Lester and Daniel Rendon. Lester did not mention that the church will be paid for any added height above 150 feet.

The church does not own and will not manage the tower, but will get 12,000 square feet of free office space. The top six floors will contain 40 luxury apartments, according to the plan, with a pool and other amenities on the roof. The remaining 180 apartments, including the affordable units, will be below the 14th floor and above the office space on the first few floors.

Uptown Planners voted against the project only because of the height and promised they would approve a project that is five stories (75 feet) shorter than the current plan. Built as designed, it will be taller than any other buildings at Balboa Park’s edge. The project will not go through the traditional permitting process as it can use a previously issued permit for a 153-foot tall building. That limits residents’ ability to affect the process.

The height is the central fight. Residents who oppose the project say there is a hard and fast 150-foot height limit around the park and point to neighboring buildings along 6th Avenue. The developer’s advisors, including Atlantis Group (co-owned by the former city director of development services who resigned over height problems at Sunroad’s building in the flight path of Montgomery Field) say that’s not the case.

At the developer’s final presentation to the community, flanked by church leaders and consultants, the developer’s representative Marcela Escobar-Eck told the community that height was not negotiable. That message landed with the planning commission, which approved the project as presented. It goes to the city council for approval on Jan. 28.

Residents say they had to do their own shade study’because the developer got a pass on any environmental assessments. The study showed the tower – though designed to be narrow on the east and west faces – will throw shadow almost half the day and far into the park in an area where there’s lots of green, soccer games, and gathering spots on the west side of the park.

Garwood was one of the many people dressed in black who opened umbrellas where the building shadow will land Sunday afternoon.

St. Paul’s manager of the Nutmeg and Olive Limited Liability Corp. and Dean’s Warden, Mark Lester, with handler Rachel Laing, came to the protest to give the church’s side of the argument, essentially focused on the creation of 18 affordable units and the free space in the tower on land already deeded to Greystar.

Lester did not mention that the church will be paid by the additional square foot for any added height above 150 feet, according to a post on its blog.

“The PSA (Purchase and Sale Agreement) now stipulates that if Greystar’s current plan for a larger structure is approved, the LLC will receive an additional $11.51 for each square foot that the city allows beyond the previously approved square footage,” Lester wrote in November 2017. (The post includes a comment from a current resident of the now abandoned 16-unit Park Chateaus who says he or she learned of the coming evictions from reading the blog.)

A homeless man named Daniel Rendon who saw the protest said he had lived at the Park Chateau until he was evicted in December. Laing said she did not believe he ever lived there, but both Lester and Laing said they did not have the details of who lived there and the resettlement packages given to the residents, since the housing was managed by a separate firm.

Previous residents will not be able to have preference for the 18 affordable units, Laing said, because of San Diego Housing Commission rules. (Linda Vista Planning Group, working with Community Housing Works, was able to get such preference for soon-to-be displaced residents of a coming project there.)

Greystar is a private equity real estate investment firm based in Charleston, South Carolina that manages nearly half a million apartments worldwide.

It will be interesting to see what our City Council does regarding this project on Monday. As designed, the project is in clear violation of many aspects of the Uptown Community Plan that was updated in 2016, and contains many developer friendly components. But apparently not "friendly" enough for Greystar who seems to feel its bare minimum inclusion of affordable units should allow it to ignore the Community Plan almost entirely. Hopefully the City Council will ask Greystar and St Paul's to make some modifications and go back to Uptown Planners for approval. While housing matters, so do our communities and our democratic process.

The "affordable units" ploy is a giant scam. In trade for providing a few "affordable" units the developer gets relief from many regulations and often get the city to help with the financing. Affordable housing is not the same as income adjusted housing. Affordable is defined as 80% of market. If a unit is renting for $2,000 on the open market then the rent is an affordable $1,800.