The Penetrators reunite for the Casbah’s 30th anniversary 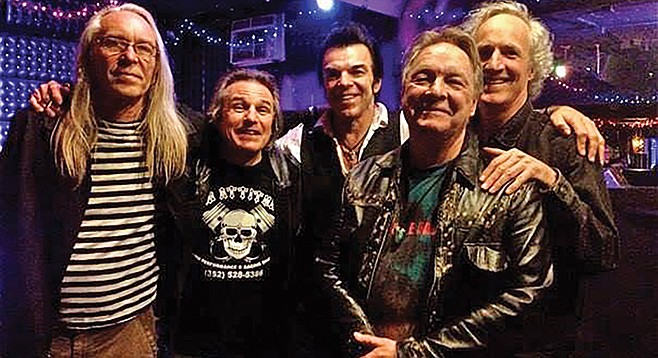 While the Casbah’s 30th is a milestone, the Penetrators reunion show packs a bigger numerical punch. Their first reunion show in five years on Friday marks the 40th anniversary for the trailblazing band that dominated San Diego’s punk and new wave scene in the late ’70s and early ’80s.

“I’m not saying it’s our last, but that’s what I’m hearing from Gary,” says Jim Call, the Penetrators keyboard player about lead singer Gary Heffern who is flying in from Finland for the reunion. “His performance was always a ball of fire. It always took a lot out of him. Maybe his age is catching up with him. But you never know. Look how many times Bowie came back.”

San Diego’s original punk Big Bang came with the Zeros, the Dils, and the Hitmakers who played to a devoted but small scene in ’76-’77. But it was the Pens who proved during their late ’70s/early ’80s reign that this wild new rock music could pack venues.

“Of course most of them are long gone, like the Adams Avenue Theater, Abbey Road [on El Cajon Boulevard], the Skeleton Club [in a pre-Gaslamp downtown], the North Park Lions Club, and those teen clubs like Journey and Headquarters which I think were both in Pacific Beach,” explains Call. “We played a lot at the Spirit Club [now Brick by Brick]. It still amazes when I run into somebody who knew us from 40 years ago.”

Call remembers when the Penetrators first started playing in 1978. “There were maybe 150 people in the entire scene. At any given show you could count on maybe 50 of them to show up. After about nine months in we knew we were on to something. We would play for like 8000 people at the Bing Crosby Hall at the Del Mar Fairgrounds.”

Other shows include opening for David Johansen at the now defunct Back Door SDSU concert venue. “We also opened for Jody Foster’s Army, the Dead Kennedys, and Killer Pussy.”

He says there were at least ten other local original new wave bands like DFX2, Gary Wilson and the Blind Dates, and Claude Coma and the IVs who were getting attention. “Anything that didn’t sound like Journey or REO Speedwagon was a good thing…the Battalion of Saints and Gary Wilson are still doing it.”

Call says the Pens “soldiered on” until 1984 when Heffern left town. He says in ‘83, drummer Dan McLain (aka Country Dick Montana) “…started doing different things creatively. He discovered the Spring Valley Inn where he launched the Snuggle Bunnies. Out of that grew the Beat Farmers,” the cow-punk band that played the local scene from the mid-’80s until McLain died on stage in November 1995.

“Actually, Joel Kmak was the first Penetrators drummer before Dan,” explains Call. “He’s been playing at all the Penetrators reunions since the first one in 2005 that commemorated the ten year anniversary of Dan’s death.”

Call, Heffern, and Kmak will be joined by other original Penetrators including guitarist Chris Davies, co-owner of Cow Records, and bassist Chris Sullivan, who now plays in the Beat Farmers offshoot called the Farmers.

Penetrators shows were known for Heffern’s frenetic dervish character while Call maintained a melodramtic seriousness on stage. “I was a noise musician going back to 1975 when I got into Metal Machine Music by Lou Reed. I brought home a piano and started pounding my fist on it.”

The Penetrators appear in celebration of the Casbah’s 30th anniversary on Friday, January 18 with the Dinettes and the Schizophonics. Heffern returns to the same venue on January 28 for Gary Heffern's Last Waltz, accompanied by a local all-star lineup featuring Ray Brandes, Cindy Lee Berryhill, David Doyle, David Fleminger, Victor Penalosa, and Kevin Ring. That bill includes Manual Scan, the Executives, and Chip Kinman performing a tribute to the Dils, the influential local punk band he co-founded in the 70s with his brother Tony, who passed away last year from pancreatic cancer.