All omakase, all the time at Hidden Fish 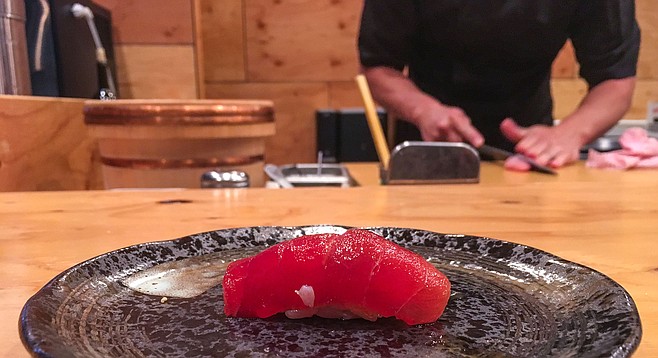 Few meals will ever top the experience of going omakase at a top tier sushi bar. By literal translation, omakase implores the diner to “trust the chef,” and there’s rarely a better argument for doing so. A sushi chef obviously knows way more than you about the glistening pieces of uncooked fish chilling behind that bar. If you want to enjoy the best that chef has to offer, appeal to his or her pride, and order omakase.

The only real drawback is the cost, and that’s especially true when the meal is open ended. During a trip to Seattle, I recall avoiding one omakase menu due to a $80 flat rate. Instead, I opted for the open-ended omakase at a comparably priced restaurant, thinking I could corral my appetite enough to stay within my means. But the chef did well to figure me out. 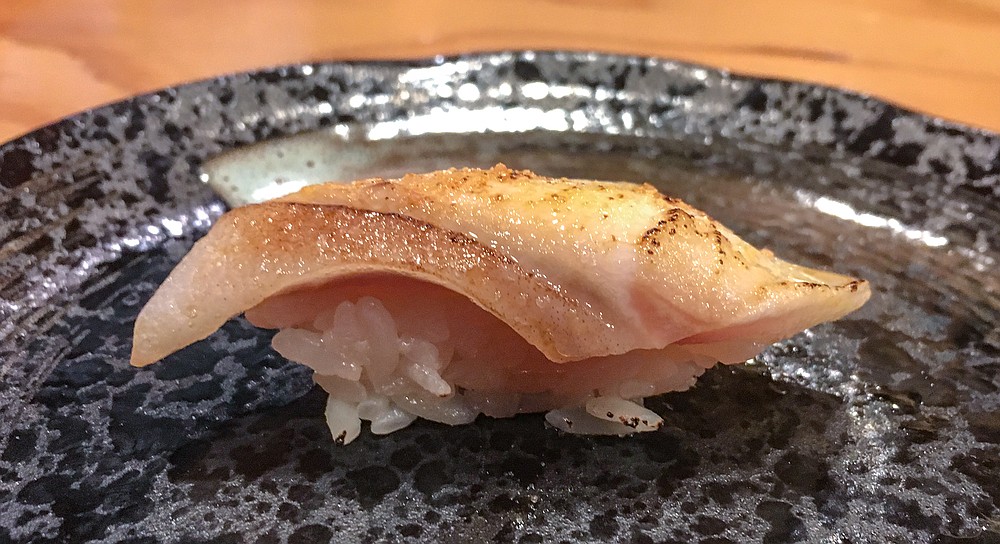 After nine or ten pieces of fish, I told him, “That’s enough for tonight.”

He responded with, “Oh, but I was about to serve you three different kinds of salmon!”

He replied, “Already? We were just getting to the otoro!”

Otoro, also known as fatty tuna belly, the prize offering of most sushi joints. Just like that, I racked up a $90 bill.

So when I heard about hidden fish, the all-Omakase sushi bar that recently opened on Convoy Street, I got really excited. Reserve a spot at this bar, and $50 gets you a twelve-part sushi feast lasting 50 minutes. For $90, you get a 90-minute feast featuring eighteen sushi courses. And, should you think that $40 sounds like a lot for six additional courses, consider that the ingredients for those final six pieces include luxury ingredients such as truffle, lobster, and/or sturgeon caviar. 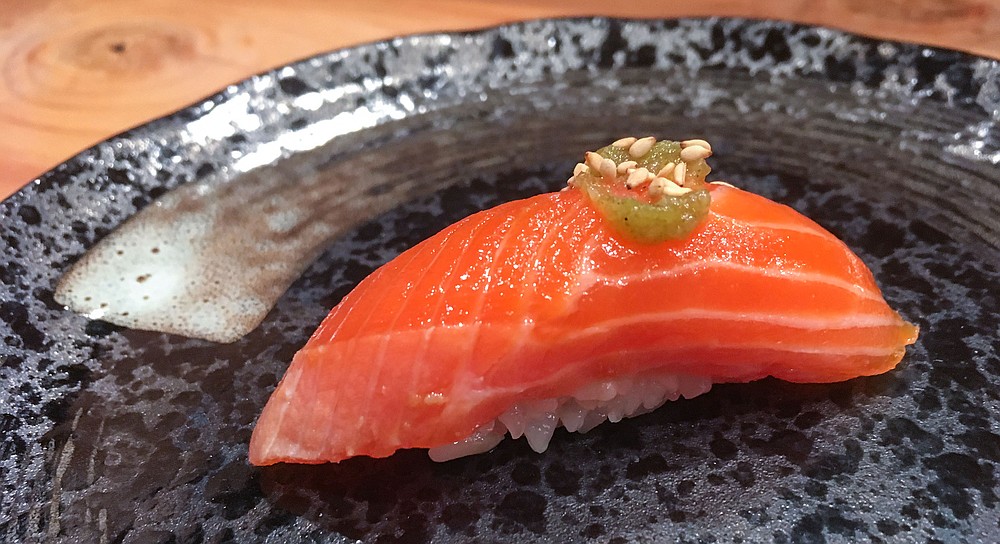 That’s indulgent for sure. But if you’re talking about high quality fish, $50 for what turned out to be eleven pieces of nigiri and a single hand roll should be viewed as a bargain.

And it’s fairly high quality. My dinner included buttery salmon, melt in your mouth albacore, and big eye tuna that glittered like a large ruby. Most of the 12 pieces offered throughout the 50 minute seating featured a distinct garnish to enhance each fish’s natural flavors. The big eye had a simple soy marinade, the salmon a peppery yuzu sauce, and the albacore garlic with green onions. A favorite was a scored piece of amberjack dressed with truffle. 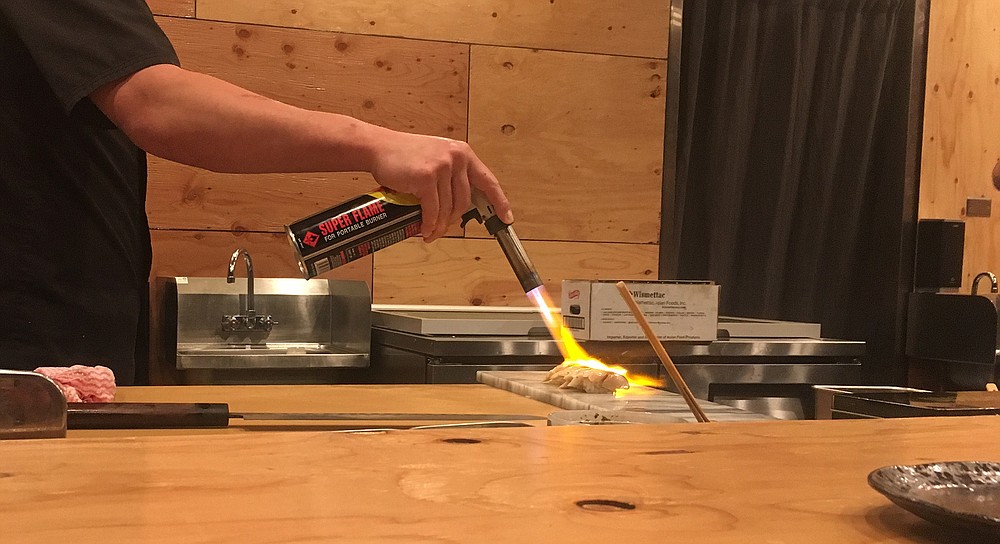 A sushi chef sears several pieces of black cod with a blowtorch.

For other pieces, the chef employed a blowtorch, searing an excellent piece of black cod, enlivened by a pinch of sea salt. Another stand-out: a cured piece of mackerel draped with a transparent sheet of pickled kelp. Then there was a tartare of toro (a minor step down from otoro), in a wrap of nori seaweed, topped with green onions.

A big reason Hidden Fish can serve twelve courses for $50 is the timing. My reservations started on the hour, along with several other parties, and while three chefs worked behind the bar, we all received the same items in the same order. Once complete, our seats were available for the next set of reservations. It’s sort of an assembly line approach to omakase that helps keep the price down. 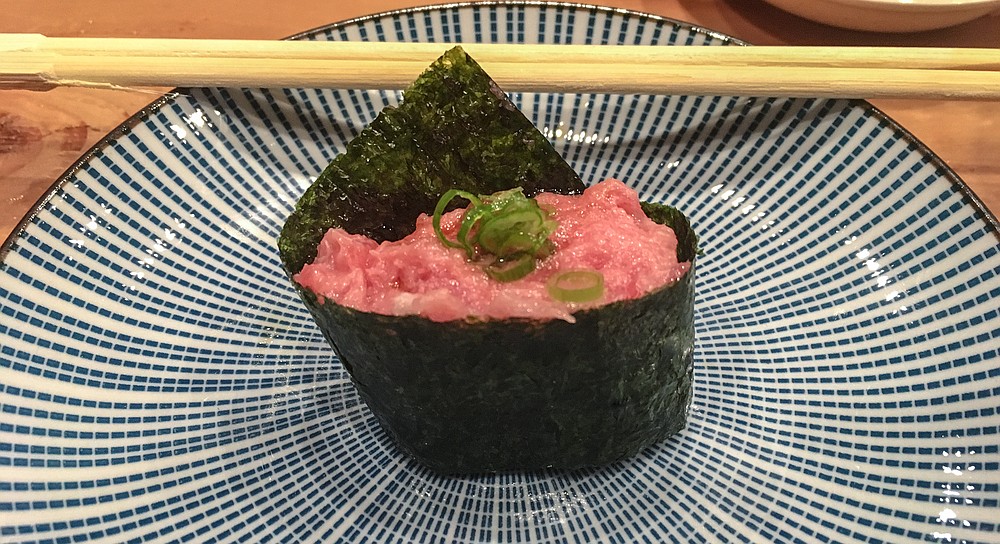 It’s still memorable, and every bite more or less delicious. But the choreographed nature of the meal dampened my usual omakase enthusiasm. At a conventional sushi bar, interaction with the chef can influence the course of the meal, as it did with that Seattle chef recognizing how I might respond to a presentation of local salmon. At Hidden Fish, a chef will substitute certain fish based on allergies and the like, but most of the menu is determined before you walk in the door.

It’s a subtle difference: the talented jazz musician improvising melodies to meet the mood of the room, versus a well-practiced soloist hitting every note just as rehearsed. Hidden Fish puts on a terrific performance in delivering a memorable meal, but the tradeoff for its advantageous price point is the loss of wonder you get when a sushi chef gauges your response to each bite, and responds with something tuned to appeal to your personal palate.

On the other hand, with the 40 bucks I saved, I spent the entire weekend gorging on tacos. Win win.

I love sushi very much and with great interest I cook them at home myself, yes, perhaps this is not a kind of luxury dish, as you can try in a restaurant, but this saves money and still turns out very tasty.