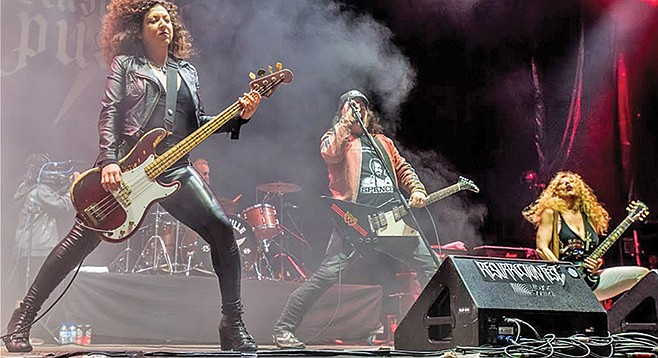 Canadian rock trio Danko Jones will make their first appearance at Observatory North Park (having previously favored the Casbah and Brick By Brick) on February 10, where they’ll presumably preview their upcoming ninth studio album, which is still untitled but nonetheless already has a lead single, “We’re Crazy.” Looking up that track on YouTube, it appears they’ve been playing the song since April, when they toured the UK with Skindred. Like many of their tunes, it’s nearly a novelty record (think the Muppets spoofing Red Hot Chili Peppers), although the ever-present humor may be a little less manic and (very slightly) more mature than on late ‘90s singles like “Bounce” (which earned their sophomore EP a 2000 Juno Award nomination as Best Alternative Album in Canada). They’ve never really been a hot commodity on the U.S. tour market, although plenty of online kudos have been proffered after high profile opening slots for the Supersuckers and San Diego’s own Flogging Molly. Singles such as “Forget My Name” and “Lovercall” (both from their 2005 album We Sweat Blood) still get frequent radio spins, as do Great White North hits like “First Date” and “Just a Beautiful Day.” This tour is a double headline bill pairing them with cowpunk rockers Nashville Pussy, touring in support of last year’s Pleased to Eat You album. The Observatory show is only four dates into a lengthy Nashville Pussy tour that runs through May, as announced by singer-guitarist Blaine Cartwright in a YouTube video recorded at the Ramones Museum in Berlin, Germany. It’s an all ages gig, with tickets only five bucks. 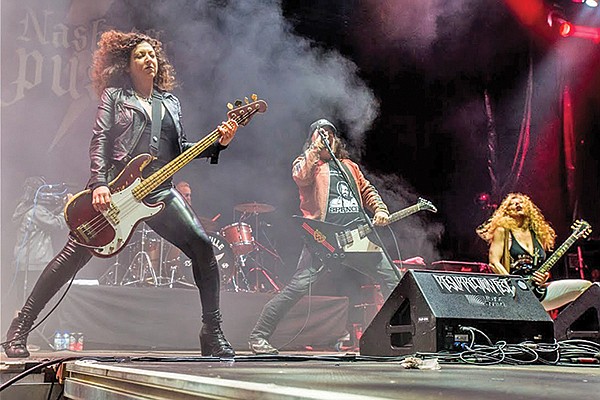 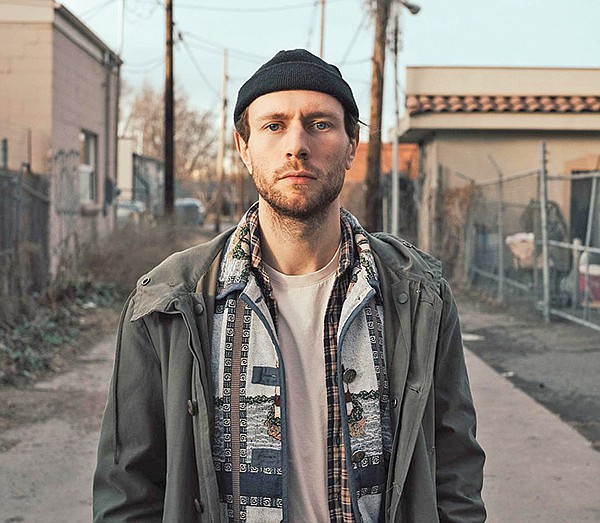 The debut San Diego performance by Welsh multi-instrumentalist, songwriter, and producer Ali Lacey, aka Novo Amor, takes place March 5 at the Music Box. The indie folk rocker first came to notice in 2014 with his Woodgate NY EP, although he’d already been recording as Novo Amor (Portuguese for “new love”) for a couple of years at that point. Last year saw a flurry of releases from the Cardiff, Wales-based performer, including his full-length Birthplace as well as multiple singles including the title track, “Utican,” and “State Lines.” He put out his sophomore EP last year, as well as a collaborative album with Ed Tullett, so even though he’s only been on the scene for a relatively short time, he has plenty of material to build a setlist with. As to the content of that material, he’s somewhat of a gypsy-sounding crooner who avails himself of the most modern sounds in dance tech, kind of like a contemporary Gino Vannelli as produced by Daft Punk, or disco-era Boz Scaggs crossed with Moby, as remixed by Pharrell. And there’s often a message behind the music. “Birthplace” arrived with an earnest anti-pollution video that features champion diver Michael Board and a giant whale sculpture made out of trash. Even his tour vehicles and recyclables are designed to minimize waste, Co2 emissions, and overall carbon footprints, and he’s been known to expound from the stage on environmental topics such as the deforestation of India and the efficacy of wind power generators. 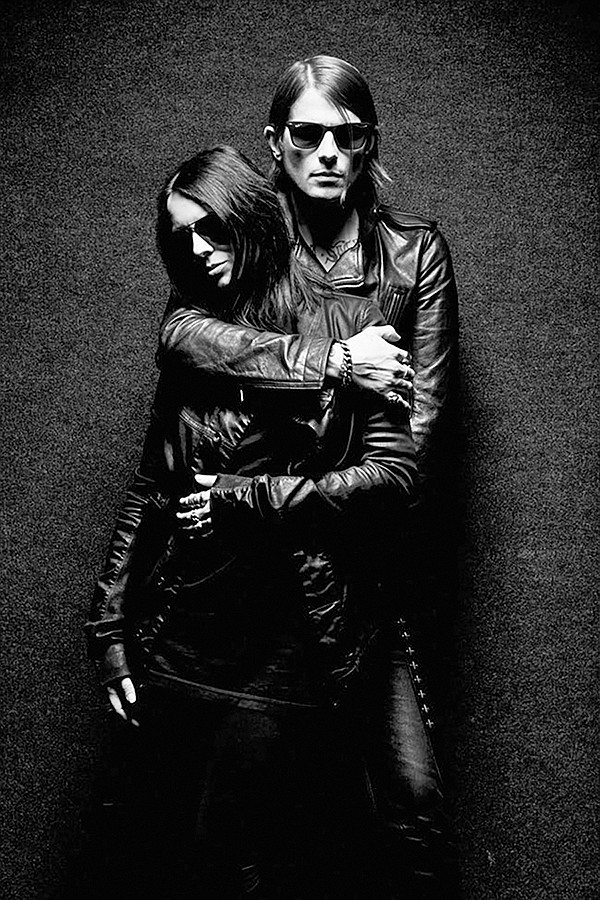 I blame Soft Cell, Joy Division, and Kraftwerk for the current rise of darkwave and synth pop. While there’s always room on the radio spectrum for well-constructed robotic rock, it’s somewhat mysterious how the chocolate aesthetics of goth somehow merged with peanut butter electronics of dance music, to beget such mechanical melancholy. At least darkwave explorer Wesley Eisold, aka Cold Cave, recognizes that his muse is best explored and absorbed via singles, rather than EPs or albums. Back when he was still playing with the more rock-centered Some Girls and Give Up the Ghost, he was already showing an affinity for short-form minimalist bands like New Order, and that’s the sort of tinny, emotional drone he’s been delivering over the course of around a half dozen singles for the past few years. The accompanying videos are full digital trickery that tends to flash in such layered overloads that one fears being driven into either psychopathy or an epileptic fit. He’s played San Diego around a dozen times since 2009, making the rounds from Soda Bar to HOB, the Hideout, Space, Music Box, Casbah, etc. The tour bringing him to the Belly Up on March 19 includes L.A. post-punk rockers Sextile and Detroit dance-punk band Adult. 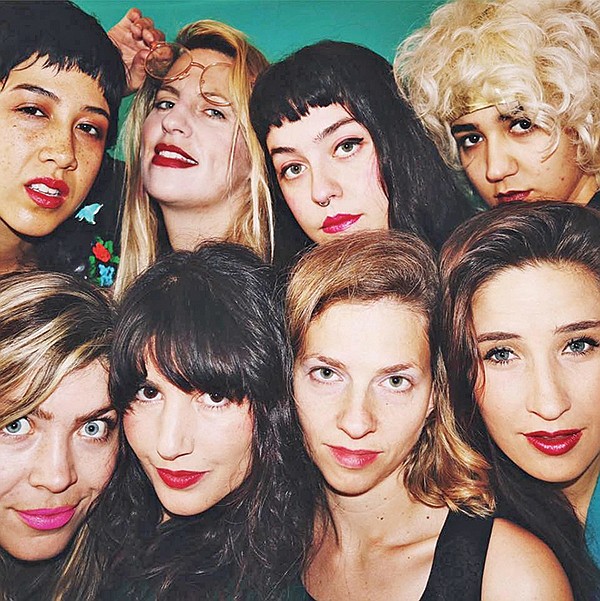 Tribute bands tend to pay homage to long-gone acts, rather than still-extant groups who might compete for ticket sales, but British singer-songwriter Kate Bush performs so rarely that few are likely to have caught her in concert. Particularly in America, thanks to the UK superstar’s well-chronicled fear of flying, as well as the fact that her devotional cult following has shrunk in the states in the many years since the FM-driven days of underground hit albums like Hounds of Love. A U.S. concert probably wouldn’t inspire the sellout fervor of her 2014 London “comeback” performances (her first in over three decades). More’s the pity, since Bush’s operatic brand of theatrical prog-pop is so well suited for stage presentations, something that’s not news to the members of local all-star ensemble Baby Bushka. The eight woman band includes Dani Bell (sans the Tarantist), Shelbi Bennett (the Midnight Pine), Natasha Kozaily (Gunakadeit), Nina Deering (Orchid Mantis), Batya MacAdam-Somer (Crooked), Leah Bowden (Tiger Milk Imports), Lexi Pulido, and Nancy Ross. YouTube clips show a well-choreographed, imaginatively costumed group of obvious fans, staging an act that – while nowhere near as elaborate and epic as a Bush concert – manages to rise above the high school musical “Hey kids, let’s put on a show” limitations presented by both budget and venue size, and instead unfolds like a genuine stage production of well-seasoned performers. The harmonies, which tend to be understated when multitracked on Bush’s recordings, are far more of an angelic choir when sung live by multiple voices, nearly qualifying the vocals themselves as individual arrangements. Their first Kate Bush Dance party at the Casbah in December 2017 was such a success that they parlayed the resulting press into a European tribute tour last year, and now they’re bringing the act back to the Casbah on April 13.