Veronica May finds that trauma can cause serious growth 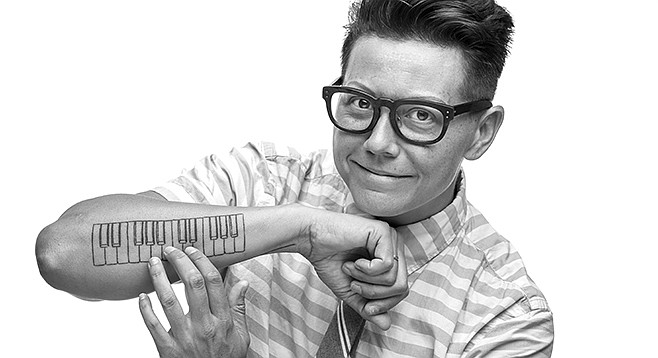 It might seem strange to fixate on the upside of a condition that turns your life into chaos and just might kill you. But singer/songwriter Veronica May is determined to stay optimistic.

“It is very scary to have a manic episode. I’ve had three and I know more are coming. But the in-betweens are so very sweet that it makes it worth it.”

The long-time San Diego resident finally learned she had the disorder after a 2008 ordeal of hallucinations, paranoia, and delusions. “Once in the ambulance, I lashed out in fear,” she recalls. “The next thing I remember is waking up strapped to a bed with a mask on my face.”

But the diagnosis didn’t slow her down. Her album Awakened, written and recorded over a period of ten years, appeared in 2017; and a few weeks ago a new song, “Rise,” premiered through Guitar Girl Magazine.

With its passion, call to community power, and condemnation of “shitty politics,” “Rise” smacks down the singer’s fears and hopes, even as she muses that she’ll have to improve, if she wants to hit her own standards.

May started music as a child in her native Colorado; her mother, a onetime Colorado Symphony member, encouraged her daughter on piano. “At night, I would play while she made dinner. She has perfect pitch, so if I would play a wrong note, she would yell the right note to me.”

She eventually learned to play drums. “Even with metronome, I’m anticipating the beat.” She began to sing and write songs. She was half of the Lovebirds for six years, and also recorded three albums with San Diego’s prolific Jeff Berkley (Berkley Hart).

For the new year, May plans more shows, hopefully at the Belly Up and/or the Casbah, her favorite venues for playing with a band — although she’s happy playing solo. She loves her fellow San Diego musicians, and goes so far as to plan camping trips with many of them.

Good, bad, or ugly, she concludes, “I’ve found that trauma can cause serious growth. I can thank my adversities for my strong character.”