If you are not a local, wait your turn 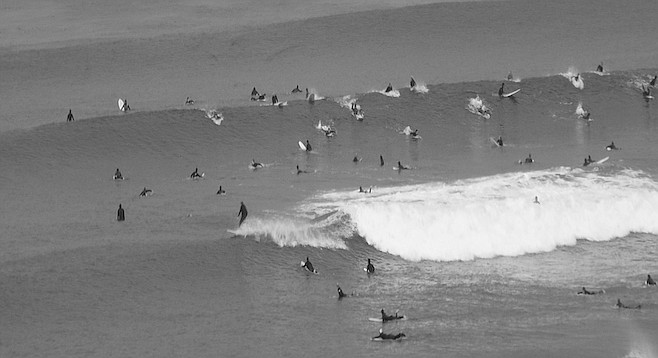 Tijuana Sloughs in the south and Cotton’s Point in the north bookend the 70-some miles of San Diego coastline. Sandwiched between these two deep-water reefs is one of the lushest wave gardens on earth. Prime among points, reefs, jetties, and beach breaks are Point Loma, La Jolla, Cardiff and Upper and Lower Trestles.

Out of respect for those who have labored to find and keep surf spots off the map, no secret locations are named in this article. If you are not a local and want to surf any of the mentioned five-star spots, it is recommended you break in slowly and wait your turn.

Point Loma holds one of San Diego’s only real point waves. It breaks on big south swells but can be worth the short boat ride. Sunset Cliffs has good to great reef breaks, many of them inaccessible by anything but a boat.

La Jolla Cove can top 15 feet on occasion. Black’s consistently deals out waves of great size and power. Windansea imitates Hawaiian power on occasion. La Jolla enjoys bigger surf than its neighbors because of the near absence of continental shelf, that menacing submerged landmass that decreases wave height.

Seaside Reef offers a steep drop and a soft shoulder on the outside. It serves as a launch ramp for some of North County’s best surfers (Ryan Burch, Damien Hobgood, and Rob Machado). The crown jewel of North County is Swami’s. Unless you’re a regular there or an exceptional surfer, you shouldn’t plan on getting anything but scraps.

Sandwiched between the playful longboard waves at Old Man’s and the occasional Hawaiian-sized surf at Cotton’s are Upper and Lower Trestles. When the World Tour hits town in late summer, it’s worth the mile walk to Lowers for unrivaled action.