But bingo plus food adds up 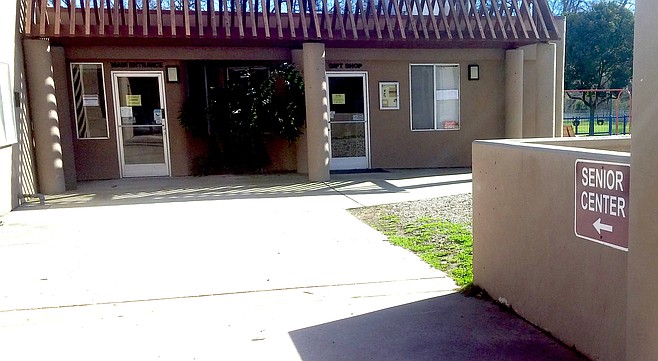 Inside the City of Poway’s Community Center, located two blocks south of Poway Road down Civic Center Drive, the Poway Senior Center has a multi-purpose room it uses Tuesday afternoons and Saturday evenings for its members to play bingo. During the Tuesday session on February 19, I drop in to get a long promised tour of the senior center’s facilities and operations.

Today the kitchen is off limits due to a backed-up drain overflow having prevented the regular noontime lunch from being served. But the bingo game is enough to rivet my attention. There must be more than 100 players in the enormous room, and all of them are concentrating on their cards, as a woman calls out the letters and numbers from a loudspeaker. I want to take pictures of the intensity in faces, but a staff member tells me the players wouldn’t like it.

At a meeting of the Poway City Council this night, another in a series of steps will be taken toward resolving the fate of the community center and, at the same time, that of the senior center. Starting in June, the current buildings are to be demolished in preparation for constructing a new community center. The senior center will have to relocate for two years but will return after construction is finished. Recently its board has been planning to operate in the interim out of First Church of Christ, Scientist, on Pomerado Road. For a nervous few months, however, its leaders had a hard time locating another site that would allow them to continue as much in their usual fashion as possible. The temporary site will allow for bingo, but it has no kitchen and meals will have to be catered from outside.

I first talked about the dilemma by phone with Leslie Hoffman, director of the senior center, last October 1. At that time, she hoped its current home could be renovated to allow her programs to have the same spaciousness they now enjoy.

But city staff warned that the old buildings were too far gone. They proposed a new design. Their analysis proved to be too expensive, yet Hoffman, formerly a financial analyst for the city, seemed to believe the city could afford it.

Building on aspects of the rejected design, city staff opted for a “hybrid”, which would be less expensive, but less spacious. And they included a “hybrid plus” that would have greater square footage. The city council scheduled their decision about whether to appropriate funding beyond what they had already committed to their February 19 meeting.

Shortly before my visit to the senior center, I contacted council members Dave Grosch and John Mullin. On the center’s website, Hoffman had earlier commended both men for helping find its temporary home at the Church of Christ, Scientist.

By phone, Mullin tells me that the “bingo games will be key” to both hybrid plans. Grosch emails me the day after the meeting. By a unanimous vote, he writes, the council appropriated enough to fund “the current cost estimates” for the hybrid plan. It agreed to “include the hybrid plus floor plan as an additive element in the bid documents.”

“Right now,” Grosch continues, “we have a $3.4m shortfall based on a current estimate for the hybrid plan. And a $5m shortfall based on the Hybrid plus design. We currently have about $3.7m in reserves to help pay for the shortfall. The designs will go out to bid soon and we will see if our original estimates are good. When the bids come back we will make our decision.”

For the two-year interim period, the council “agreed to release $288k” for the two-year lease at the church. “Also the council agreed to fund $50k per year to help with the operational cost (utilities, trash, alarms, etc) at the temporary facility,” writes Grosch.

“We have been helping with the operational cost for many years.”

“And don’t forget we are building a new community center, in which the senior center will share with other city activities.”

By phone the following day, I ask Grosch if the new buildings will have as much space for bingo as the current ones. “Not as much, but still plenty of room,” he says.

At the meeting, he says, Leslie Hoffman spoke “passionately” in favor of a better deal for her beloved seniors. “We [all] love our seniors,” says Grosch.

Does anyone else have a problem with the idea of highly-affluent Poway not having the funds to provide its seniors with a decent center and place to have a meal? Is it that most of the elders in that city are so well off that they don't need or want such a spot? I doubt that. No, the situation is a matter of priorities, although I cannot imagine what has a claim on the city resources. Poway should be ashamed if itself.