An emergency meeting summoned by the Lakeside Community Planning Group last night filled up the room at the community center in a jiffy with several dozens residents. Two county employees came to present the latest draft of the new Zoning Ordinance and County Code Clean Up. Noah Alvey, a planner with the county, answered questions coming from a fired up audience.

Scott Alevy, board member with the planning group, mentioned, “This is the 31st cleanup since the ordinance was originally adopted 41 years ago. There are five categories of zoning ordinance amendments — a) definitions b) animal regulations c) development regulations d) general regulations, and e) County code amendments.” 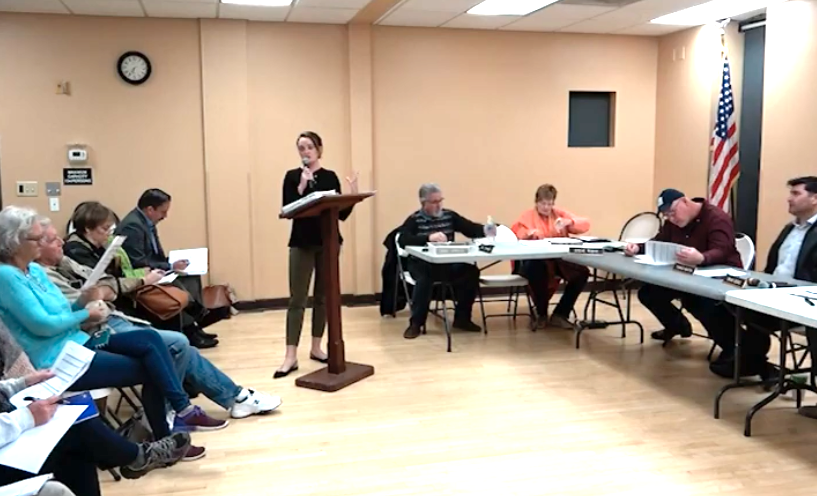 The public meeting was set up to discuss the matter before the first public hearing at the county board of supervisors scheduled for next week. Alevy noted, “Some items that are of concern to us include placement of wireless communication equipment in right of ways without the need for a discretionary permit, and rounding up any acreage to the next integer.” Alevy added, “there are also concerns to changes allowing multi-family development on R-1 (single residential home zoning) lots, changes in setback requirements, state density calculations, requirements and bonuses, high capacity transit issues, accessory dwelling unit issues and several other items.”

During the previous meeting last September, the majority of participants voted to stimulate the construction of single-family homes throughout the rural areas versus multiplex and other types of high-density housing units. At the end of the meeting last night, one participant concluded: “We lost single-family units with this plan.” The resigned conclusion belonged to Janis Shackelford, voted citizen of the year in 2018 for her involvement with Lakeside. Shackelford and her husband, Gordon, pored over a stack of documents trying to make sense of the new changes.

A controversial concept in the update stated, “if a single lot has a fraction of a dwelling unit (0.5 and higher) then it can be rounded up to the nearest whole number in order to encourage housing production." Gordon Shackelford contested the claim, pointing out that the fraction conforms with the General Plan densities, while rounding up the numbers would go above the approved maximum.

“To put a dwelling there, you’d exceed the planned density and that’s a fundamental problem with this.”

Planning manager Alvey explained, “Overall, the intention is to capture what the General Plan intended and also tracking at the community basis, the overall number of housing units that were anticipated based on the General Plan.” At which Schakelford replied, “You just threw in a wild card. You’re not talking about the density of the lot or subdivision, but about the overall density of the community.” After intense back and forth that left the audience more confused about the subject, Land Use Planner Liberman clarified, “This will only apply to 8 to 10 thousands parcels throughout the county where this could actually take place, based on the size of the lot whether it would be a fraction of the lot or not.” Liberman said this reflects the county’s effort “to increase the production of housing.”

Local resident Jitka Perez brought a copy of the Lakeside Community Plan to read it out loud, then shred it to pieces, saying she based her choice to move to Lakeside on the stated goal to “foster and preserve a rural atmosphere and a sense of spaciousness.”

Perez concluded, “It is a nightmare to live knowing that these densities are gonna increase and we don’t have the facilities to handle the runoff because it is no fun pumping water off your property for six hours.”

Asked to clarify what data was used to determine the affordability factor for Lakeside in order to justify an afflux of new urban development, Liberman said the county used the standard formula from the US Department of Housing and Community development. “ If you’re paying more than 30% of your income on the housing, then that housing is not affordable,” said Liberman.

Another controversial issue targeted the new change regarding a “3 feet setback” for housing units instead of 5 feet. Planning group member Alevy mentioned the fire safety concerns, pointing out, “I think all of this is driven by the state and the state continues to be driven by a small circle of people in San Francisco where there’s a high density and 3 feet there may feel expansive. This is not something that is consistent with the nature of our communities.” Liberman said the new constructions would have to comply with the fire code for a specific area.

The board concluded the meeting with unanimous votes in favor of Alvey’s motion to oppose three major changes in the housing ordinance: “We feel that the rounding up, the setback number and the multi family units are inconsistent with the nature of our community and our plan.”

The Lakeside Planning Group has an advisory role with no voting power to influence the decision of the board of supervisors on any of these matters. After the meeting, one board member said off the record that this meeting was just a box checked by the county to claim they value the community input, but the decision is already made.

The San Diego County board of supervisors will have two public hearings about the new changes in the housing ordinance on February 27 and March 13 at 9:00 a.m at the county’s building.

Aw for crying out loud leave Lakeside alone. We need rural areas and they don't need any multi-family low income housing. There is no such thing as affordable housing in San Diego County.

This is happening all up and down the state. Encinitas, Hunt. Beach, now Lakeside. Sacramento took away local control by forcing towns to adopt massive low income housing plans, community character doesn't matter anymore. Every town will have apts and condos2 & 3 stories high, in order to meet state requirements.

There is a difference between "low income" housing and "affordable" housing. Affordable housing is a scam used my developers to get special financing and zoning waivers by offering a few "affordable" units. Low income housing is HUD/section 8 income qualified housing.

While communities got a short reprieve with the failure of SB 827 in the last legislative session, the developers and their shills continue trying to remove the last of protections and local input. The new version, SB 50, softens some of the original wording, but would still give away what's left of the store.

Which is why "charities" funded by the developers are hard at work, illegally lobbying legislators in Sacramento, and recruiting ringers to run for election to local community planning groups.

Follow the money and you will find who owns and operates the politician.

and knowing they are owned is bad enough without knowing who owns them.