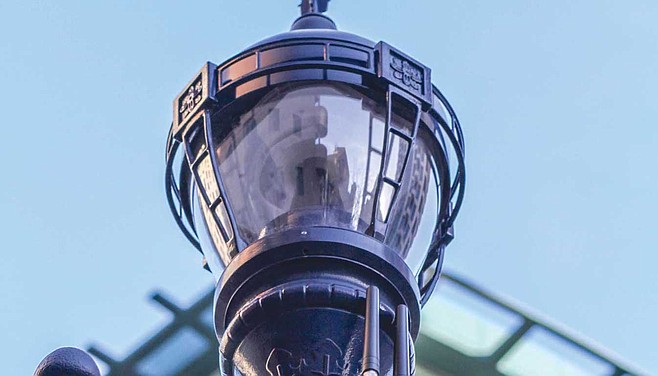 As predicted by privacy advocates, a hoard of surveillance data collected by video cameras and audio sensors incorporated into San Diego street lights is exclusively in the hands of the city's police department.

The sweeping police powers are contained in a freshly-minted Intelligent Streetlight Data Policy, signed and dated February 6, more than a month after the Reader's January 3 request under the California public records act to obtain the information gathered by city sensors housed in a single streetlight downtown. 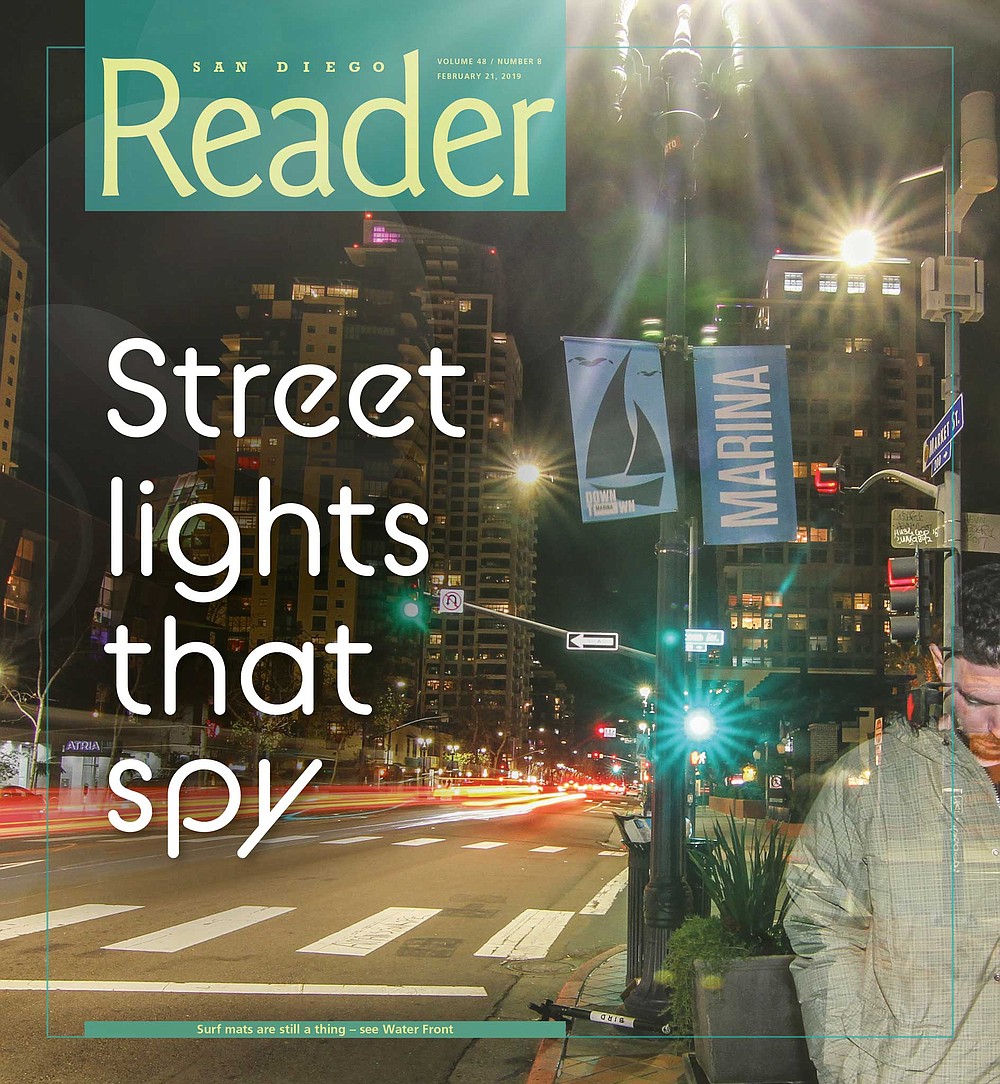 The city denied that request after publication here on February 20 of "Streetlights that Spy," an investigation into San Diego's so-called intelligent streetlight program, in which more than 3200 light fixtures have been outfitted with an array of video, audio, and data sensors focused on streets and sidewalks below.

The new policy document, created without public notice or input, appears to be the first by the city to address privacy and access issues regarding a host of sensitive data collected by the city's $30.3 million streetlight surveillance system, online since 2017.

"The video and related images from the cameras onboard the City's intelligent streetlight sensors may be accessed exclusively for law enforcement purposes with the Police Department as the custodian and departmental owner of these records," according to the policy.

"Only law enforcement personnel authorized by the Chief of Police and subject to Police Department policy shall have access to these recordings. The Chief of Police shall determine the manner in which video is retained and the duration of retention."

The policy adds that "audio from the City's intelligent streetlight sensors may be accessed exclusively for law enforcement purposes with the Police Department as the custodian and departmental owner of these records."

Critics of high-tech intelligence collection by city streetlights have < have long questioned law enforcement's role in gathering and storing the resulting data. "Local police forces have largely taken to acquiring and using surveillance technologies in secret,” according to the website of the American Civil Liberties Union.

Why would anyone have an expectation of privacy when in a public place? It’s difficult if not impossible to move in public without be caught on a camera, cellphone video or other motion capture devices such as forward looking video becoming standard equipment in many cars today.

Take the recent in-the-News case of Jussie Smollett, Chicago Police have over 50 hours of video from PRIVATE and public cameras. That video allowed them to track the “suspects” of the hoax back to a cab, then to a ride share and ultimately to their residence.

Another example: the Boston Marathon bombers bothers were tracked backwards from the explosions and ultimately identified by PRIVATE video camera footage.

Both of these examples were incidents committed in the public right-of-way, where citizens and police worked together to solve heinous and despicable acts.
No one should have ANY EXPECTATION OF PRIVACY while out in public these days. And, of course, it goes without saying, if you’re not doing anything wrong in the first place you will have nothing to worry about.

JustWondering: you very effectively articulated exactly what I was thinking.

And here is the tragedy of the 21st Century commons. We are all reasonable people, and so we all should reasonably expect to never have any privacy if ever we set foot outdoors. Hell, with the Internet of Things, many growing up now will think we shouldn't even expect it indoors!

I wonder if we'll all still be so reasonable once deepfake tech is perfected, knowing that only the State is allowed to hold or release footage when and how they will, to allege whatever we've "done"?

No one, not even the government, forces you or anyone else to install any surveillance technology inside your personal residence. You chose to own a smart phone, you chose not to put it in a drawer or container when not in use. Nevertheless, as the recent disclosure regarding the Google/Nest security system and the hidden microphone revealed, it’s a buyer/user beware world we live in.

Technology can be a wonderful convenience but there are trade offs. No one, abosolutely no one, should believe Googles “do no evil” statement as fact, because it’s a fictional marketing ploy.

As long as humans run the place, and greed exists at any level, the opportunity to do evil things happens at all levels.

I have no problem with the “state” holding the video captured in public places. At least the state, as far as we know, is not monetizing the data unlike the “do no evil” private companies.

It's not an either/or choice—it's a false choice. Sorry you can't see that.

Nonsense, of course it’s your choice. I choose not to commit criminal acts. I choose to not own a smart phone. Or, if I did, I choose to disable the “location services” on the apps I use. Of course, that doesn’t stop a carrier from triangulating my travel path from cellphone towers, but that goes back to choice #1 ... not being involved in criminal behaviors. The “state” must still convince a judge with reasonable suspicion and probable cause to get him or her to issue a search warrant for cellphone data records.

If there’s an error here, it’s the lack of public information about the use of the technology in public spaces. You see, I believe there is a deterrent affect. If it was obvious video surveillance was present, how many people would make a choice and not commit a criminal act in the first place?

And when "criminal acts" can be changed to include peaceably assembling to protest, you won't have any problem with that. Got it.

I sincerely doubt one of our basic 1st Ammendment rights is in jeopardy by public right-of-way video. I completely reject your dystopian view of the future.

"the city's $30.3 million streetlight surveillance system" - it's your privacy, but it's our money. How many sidewalks could have been fixed instead?

How many crimes will be prevented and or solved? We will never know I suppose. In a representative form of government choices such as these rarely occur without notice.

However, in this case there did not seem to be much, if any, reporting until after the installation. That, in my opinion, is where the story is. Was the RFP public? Were responses to any RFP discussed at Council? Who initiated this action? Mayor, Council, a City Department? Were there matching or grant dollars from another source? Lots of questions, few answers.

More questions than answers. Maybe a followup article will be forthcoming.

Three years ago San Diego Mayor Kevin Faulkner sold out to tech entrepreneurs for re-election campaign cash, allowing installation of spy streetlights at undisclosed locations around the city. Until now, there was no public discussion by elected representatives or public information in the local media before millions of taxpayer dollars were spent. Data collection from these spy streetlight stations is allegedly held only by the police.

Why don't I feel relief, more secure? Do the cops share this information with Immigration and Customs Enforcement (ICE) or Customs and Border Protection in contravention of the laws of California's sanctuary state? Why do I feel shocked and concerned? How is this different from East German Stasi police that routinely collected information on its citizens and used it against them?

Thanks, monaghan. I've been feeling like I'm in the Twilight Zone, being attacked for what should be sensible alarm at this insane overreach.