A stinging moment of comeuppance 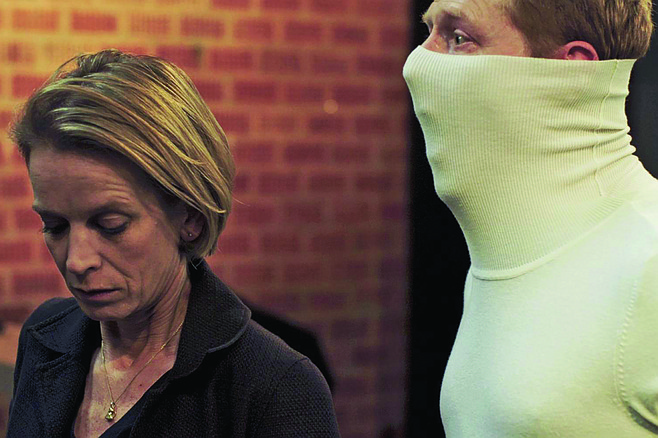 When festival coordinator Tobias Queck lamented the high cost of renting an auditorium for the German Currents Film Festival, I suggested that he look into the more reasonably priced venue. What was once a yearly event has now blossomed into a regular presence at the Digital Gym. That includes the amusing industry send-up Casting, which screens Friday at 8pm.

Why the need for a heterosexual make over of Rainer Werner Fassbinder’s all-woman melodrama The Bitter Tears of Petra Von Kant? Well, for one thing, it’s designed as a small screen re-do of the director’s breakthrough feature, and what’s television without a gimmick? When questioned about the reversal, the only insight the project director Vera (Judith Engel) has to offer is, “(It’s) not about lesbian love, it’s about love.”

It’s five days before shooting commences, and Vera — it’s the third film for the documentarian, and her first dramatic digression — can’t seem to make up her mind over who should play the lead role of Fassbinder’s broken-but-still-capable-of-loving fashion designer. That’s the premise behind co-writer and director Nicolas Wackerbarth’s alternately amusing and agonizingly frustrating comedy.

Almut Dehlen (Ursina Lardi) is at the “shit or get off the pot” stage of casting. It’s her fourth call-back, yet the movie opens inside the television studio with a frazzled casting director on the phone, feeding her directions to the makeup room. (One would think by now she’d know where to find the place.) With the film’s male lead away on business, Almut doesn’t cotton to running lines with Gerwin (Andreas Lust), who, in her estimation, and without ever having worked with the man, is strictly a second-rate talent.

Gerwin claims to have set acting aside, only agreeing to play rehearsal stand-in as a favor to a friend. In truth, his disillusionment with performing has less to do with art and more to do with him currently holding down a position as a general contractor to pay the bills. Initial word has him pegged as too old and too gay to play a role originally conceived with a bisexual young woman in mind. But when given the chance, Gerwin’s playful ambivalence turns to icy ambition.

We join Vera in “seeing” at least a half-dozen contenders, none of whom make the grade. The second actress to read (Marie-Lou Sellem) appears to know more about the source material than the director. That’s never a good fit. Andrea (Annika Grossmann) is such a big name that she initially refused to audition for the role. Halfway through a perfunctory walk-through, Vera shows her the door. Andrea’s follow-up dressing down, delivered in character and with the characteristic bitterness of Fassbinder’s lead, is a stinging moment of comeuppance.

While waiting in the green room, the celebrated actress Luise Maderer (Corinna Kirchhoff) fields adoring comments from Gerwin and makeup artist Hanne (Nicole Marischka), the latter moved to tears by one particular performance. Imagine Hanne’s horror (and my delight) when Luise laughs it off, calling the picture “sentimental trash.” She lost both her parents not long before seeing the movie, and like so many filmgoers, finds herself incapable of separating an appreciation of art with personal identification.

So where’s the agony that was hinted at earlier? The film takes place in one location, and each scene plays out in real time. That’s where the similarities begin to wane. There’s not an uninformed composition in all of Petra Von Kant. If it was Wackerbarth’s intention to pay homage to Fassbinder, the least he could have done was pop for a tripod. Luckily, Casting is couched in acting, and even the non-stop jiggling of the camera can’t shake off these performances.

German Currents has always been keen on presenting films for the entire family. Krabat and the Legend of the Satanic Mill co-stars Daniel Brühl in a fantasy adventure yarn about a sorcerer’s apprentice who rebels against his master after discovering his evil plans. The Saturday morning matinee kicks off at 10:30. For more information visit digitalgym.org.