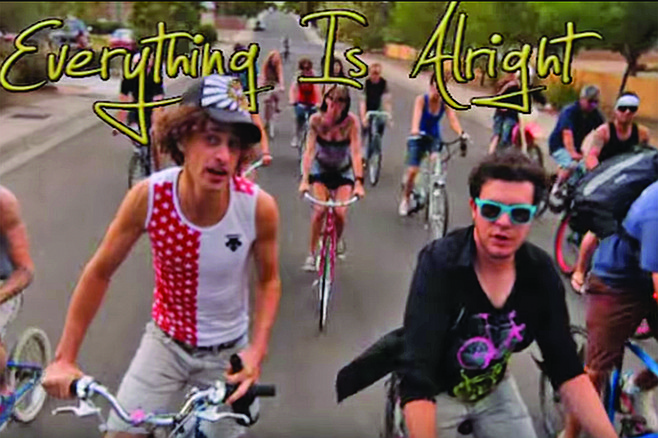 Once again Mario Rivera has proven that operating a video editing console can be as valuable to your band as playing an instrument.

The video he created for “Champagne Bike Ride” not only helped him market one of his old bands, Monster Paws, it helped him get connected with local creative agency I.D.E.A. where he worked on some of the TV ads for the Funner California campaigns for Harrah’s Casino “I’m almost done editing a documentary called Strange 80s which has members of No Doubt, Velvet Revolver, Marilyn Manson, Metallica, Offspring, and Eagles of Death Metal doing covers of 80s songs like 'Hey Mickey,' 'Jessie’s Girl,' and 'Summer of ’69.'”

Rivera says he was brought into Strange 80s by a non-profit called Charity Bomb which promises 100 percent proceeds from the live shows it produces from charity events. “Charity Bomb was co-founded by Matthew Leone, who is in a band called Madina Lake from Chicago which I knew from way back. Matthew once went out to help a woman he heard screaming. He ended up getting beaten by a guy with a brick and was left for dead. He had a third of his skull removed and flatlined three times. After that happened all these rock stars like Metallica and Smashing Pumpkins did benefits for him, because he couldn’t pay for his medical. That led to him, his twin brother, and a friend starting Charity Bomb.”

Rivera says the major point of the documentary Strange 80s “is all about changing the culture on how mental health is perceived.” He says Chris Cornell or Linkin Park’s Chester Bennington prove that depression can impact everyone. “Also involved in Strange 80s is Chester’s wife Talinda who started a group called 320 Changes Direction, which she started after Chester committed suicide.”

Rivera says he, like everyone else involved, happily donated his time to Strange 80s. But he admits his band Nights Like Thieves got a perk out of the deal.

“I edited two of our songs in. When they heard they said, ‘This is great who is it?’ They let us them it in.”

Nights Like Thieves just released Sophomore Slump: The EP on CD and 7-inch vinyl formats. It contains “Red Roses,” which is the 91X Local Break artist for the month, which means it gets regular rotation throughout February. The EP also includes “This Broken Satellite,” which Rivera crafted into a video. “We’re playing our first show at the Casbah on February 27. We’ve been trying to play there for two-and-a-half years, and we actually get to headline.” Also appearing is Avenue Army and Justin Linn & the Rotation.

And by the way, Rivera and his Nights Like Thieves bandmates are not ashamed of the “e” word. “Yes, we are emo and proud of it even though we’re one of the only bands in San Diego that plays it,” he says of the pop-punk formula that was at its peak in the late 90s and early 2000s. “But not everybody is going to like everything. I do think emo is starting to come back…it is bigger in the Midwest. We have a decent following there. One local record store in Chicago ordered 20 copies of our new EP.”