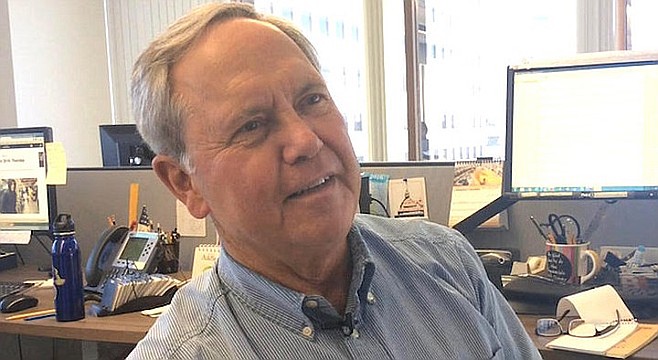 A year ago, he recruited noted patent guru Mark Kokes as chief intellectual property officer of NantWorks, Soon-Shiong's sprawling drug development outfit, to put a wall around the family jewels.

"During the year we were able to build a world‐class intellectual property team of 20+ members and greatly improve our prosecution efficiency," Kokes, former IP honcho at Blackberry, told the website IAM Market last month.

"Nant and its affiliates remain deeply surprised regarding the loose distribution of biological materials in the life sciences space by sophisticated parties that should know that it is not appropriate to distribute or use other people’s property, patent or otherwise, without their express permission."

But is what's good for the billionaire fine with his reportorial minions at the Los Angeles Times, purchased by Soon-Shiong last year in a $500 million-plus deal that included the San Diego Union-Tribune?

That's the question posed at the Times regarding an intellectual property clause surfaced by Soon-Shiong's representatives during contract talks with the Los Angeles Times Guild, the journalists' labor union formed last year amidst tumult caused by the paper's former owner, the Chicago-based newspaper chain formerly known as Tronc.

"Late in negotiations, the company has proposed a draconian policy on books and other creative projects that, as a condition of employment, would go far beyond the work-for-hire standards of U.S. copyright law and the relicensing practices historically allowed by The Times," says a February 13 Open Letter to management posted on the Guild's website.

"If we have a book idea related to our work, even if fictional, the company wants unfettered power to claim control over whether it gets written, who owns the copyright and what we might get paid for it. The company also wants to claim the film rights to such books even if the company grants permission for the book to be written, on unpaid leave, for an outside publisher."

"No other newspaper has contract language this strict — not the New York Times, Washington Post, Wall Street Journal. This is especially inappropriate, coming as it does from the Los Angeles Times, which runs the highly popular L.A. Times Festival of Books and has a proud history of employing journalists who have made significant contributions to the literary community."

Worse, according to the letter, the Times is seeking to appropriate the very personas of the journalists themselves.

"This is the age of Netflix, and the company has additionally asserted 'rights to use employee names, likenesses, biographical information, etc.,' without requiring any consent from us, for any creative project it chooses to pursue while obligating us to participate in its development.

“It’s the sort of thing that smacks of the Hollywood studio system of the 1930s when studio executives controlled what movies their actors appeared in and with whom. There’s a reason that system came to an end."

Meanwhile, back at the U-T where workers voted in 1998 to oust the newspaper guild from the plant, there hasn't yet been any talk in public regarding Soon-Shiong's proposed intellectual property restrictions in L.A.

Though not as prolific as their associates to the north, U-T writers have some claim to literary distinction, including the efforts of now-retired Roger Showley, author of well-regarded local history books, including San Diego: Perfecting Paradise and Balboa Park: A Millennium History.

I’m just wondering if this was in place during Don Bauder’s era at the U~T, would Captain Money and the Golden Girl been published? Or would the story of J. David Dominelli and Nancy Hoover’s exploits in San Diego died on the vine?

Patrick Soon-Shiong didn't get the U-T real estate, either. Will the last employee at the U-T offices downtown please turn out the lights?

"Back-in-the-day" 98% of our neighbors got the UT now less than 10% do and as Richard Hogan pointed out the are old and white and when the "pass to the other side" 100% of the neighborhood will be UT free.